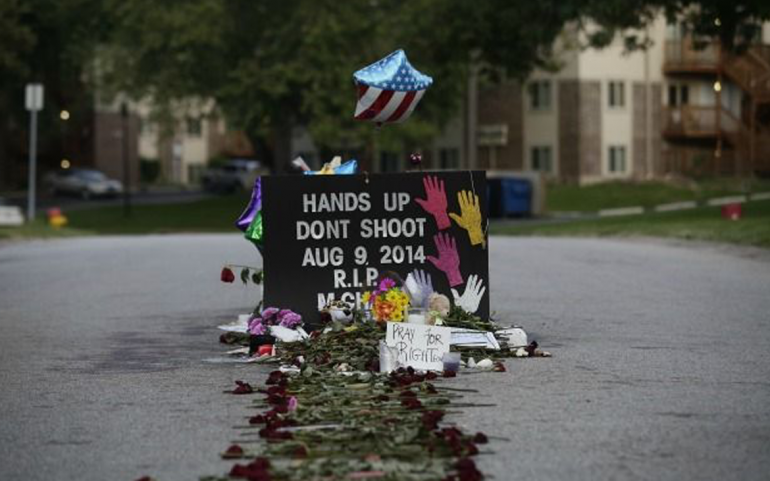 I became an activist advocating for common sense gun legislation four years ago, at only 13 years of age, when Mike Brown was brutally murdered by a police officer in Ferguson, MO. He laid in the street for 4 hours until an ambulance picked up his body. That day opened my eyes to the true value of blacks in America – more specifically the lack thereof. The image of Mike’s lifeless, bloody body left a psychological scar that I still feel to this day. Mike Brown's death led to lots of unrest in my city, and with the intense emotions I was feeling, I couldn't just sit back and do nothing. I thought of him as my very own black brother lying dead in the street.

As painful as it was to be black in America at that time, I decided to fight…even if I did it alone. Soon after, I organized a walkout at my middle school as an 8th grader. We walked out of our classrooms and we all sat in the cafeteria. There, I spoke of my concerns along with many other students. We discussed how we could move forward with healing: by taking action, being involved in the community, and by registering to vote when the time came. We strived to make changes for gun violence on the streets but also in schools and environments that were once deemed 'safe enough.'

I recently became more active than ever, for two key reasons: 1) I am nearing voting age, and 2) Parkland. When I heard of the Parkland shooting, I found myself brushing past the story as if school shootings were normal occurrences, though I prayed it wasn’t true. After a video circulated over social and mainstream media of students ducking and covering while bullets entered their classroom window, I realized that it was in fact very real. Then, it began to sink in as the news came in about casualties. I froze, and was in complete shock before I could even cry. I’d felt that pain before and it was hard to ignore it.

It's so unfortunate that it took mass shooting after mass shooting for us to finally band together as students to use our voices for change. I've never been hopeful for this generation until now, as we come together en masse for something that could truly help to shape the future.

On February 27, I was one of the organizers of my high school student-led walkout, as we protested for stricter gun laws and stood in solidarity with Parkland students and students all over the US that are affected by gun violence. While protesting out there all day, I felt my fragility. I’d been traumatized going to school for days, even weeks following the Parkland shooting. I was very easily startled by everything, from the littlest of noises to the sounds of lockers slamming and echoing through the hallways. I shouldn't be afraid to go to school to get an education, and neither should my peers. So I decided from that day on I would do everything possible and within my power to ensure that no other students would feel like I did.

Honestly, the only thing I can say that I am afraid of as a young black activist is being overshadowed, and only becoming a whisper in this conversation that intensely affects me and my community. Black Lives Matter has been protesting and marching for common sense gun legislation and for individuals, including police officers, to be held accountable for their actions. But when the focus was on the deaths of black kids, the movement couldn’t catch steam.

After the Parkland shooting happened, the nation had a completely different response to those individuals affected and there were marches all over America. This is so important, and I don’t take anything away from it. But if we talk about being inclusive, everyone should have a voice and media shouldn't decide on whose story is more significant. Gun violence is gun violence and it affects us all – especially the black community. We can’t forget that. Our stories are important and as long as we're still here to tell it, we should be able to. I certainly will.

My name is Kenidra Woods. I am 17 years old. I live in St.Louis, MO. I am a author, advocate for mental health, and activist. At the age of 16, I wrote my first book called, "A Heart Of Hope," which is about the hardships that I have faced in life and how I overcame them. This book play a big part in why I am as vocal and as transparent as I am now in my activism. I am not only pushing for common sense gun legislation but also safer schools, parks, concerts, and environments that were once deemed safe. At first I was simply asking for change, but now I am demanding it.