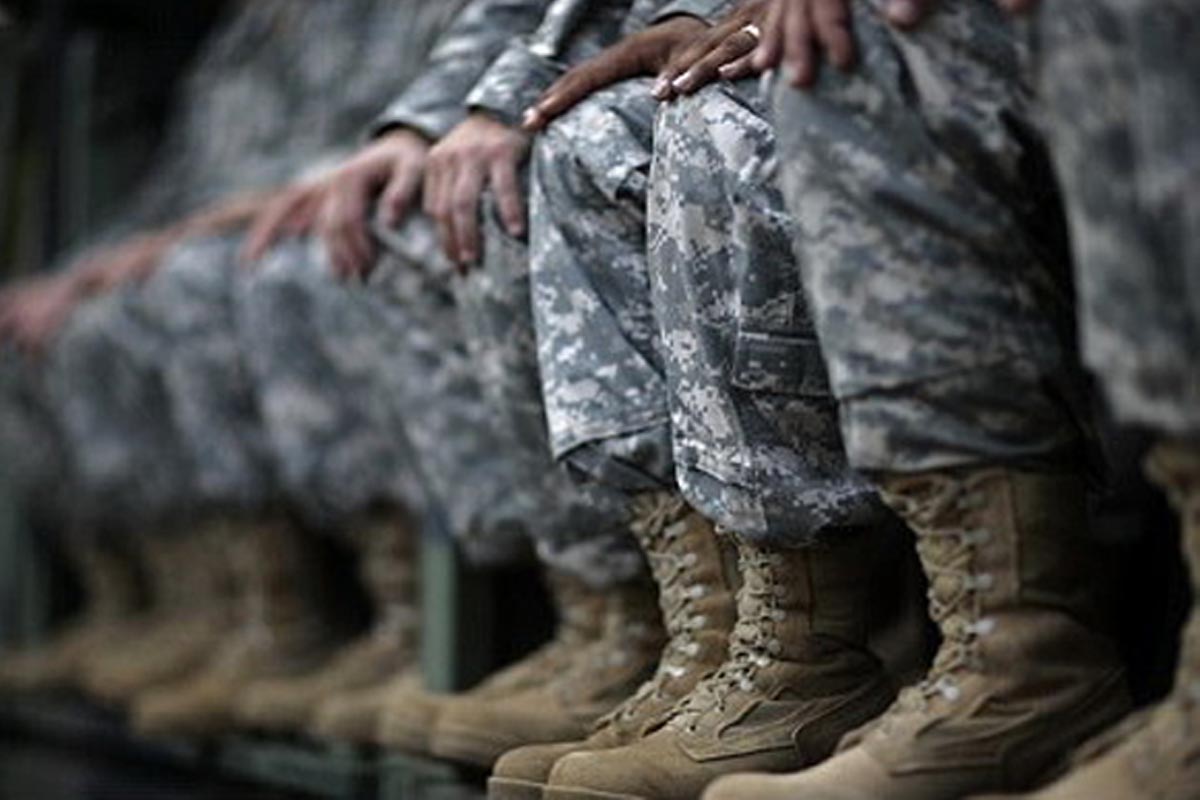 Recently, I tweeted this:

I have more to say about it than a tweet will allow. Here goes.

I served in the Army from the ages of 18 to 22, but, despite being on active duty during the Panama conflict and the first Gulf War, my specialized position as a Military Police K-9 Handler kept me in the United States throughout my enlistment. So, yes, I'm a veteran, but I'm not a combat veteran ... and because of that distinction, I, for many years after my honorable discharge, never truly thought of myself as a "veteran."

Both of my late grandfathers served during World War II. My maternal grandfather was in the 4th Marine Division and experienced heavy combat on Iwo Jima and Saipan. My maternal grandmother lost a brother and a nephew to the Vietnam War. My father served in the Navy on a battleship off the coast of Vietnam, and an older cousin saw major action in the jungle there.

When posting to Facebook on Veterans Day several years ago, I noted that, at the time, I still did not think of myself as a veteran, particularly as compared to those in my family who served in combat. The aforementioned cousin, who continued to serve as both a civilian police officer and a military reservist for decades after the Vietnam War (including deployments to the Middle East during the second Gulf War), responded thusly:

"Jon, you served. That makes you a VETERAN."

His response meant a great deal to me. Only through circumstances beyond my own control did I avoid going into a war zone, but I was willing to, I trained to, and I would have if so ordered. I made the choice to serve my country, and my country chose not to send me into combat ... but I have since come to realize, accept and fully embrace the fact that I am a veteran who served honorably.

I am extremely proud of my time in the Army, and of my family's history of service to the United States. I always feel great pride at the sight of the American flag, and have always stood and saluted when attending an event during which the national anthem was played.

And so it was with no small amount of trepidation and introspection that I composed and sent the tweet shown above ... not only because of my own feelings about duty, honor and service, but because I'm quite certain that the veterans in my family - including my own father, my aforementioned cousin, and, were he still alive, my grandfather the Marine, whose opinion I valued above most others - would be completely disgusted with me for it. And I would understand their disgust. We don't see eye to eye on many things, and I believe they have some horribly misguided social and political views, but they've certainly earned the right to have an opinion on a matter in which veterans are being used like political pawns.

You know who hasn't earned that right? This motherfucker right here:

Donald Trump is a draft-dodging, race-baiting, jingoistic fraud who wraps himself in the flag not because he's a true patriot who would fight and die for his country, but because he is a sick, twisted, self-serving, narcissistic coward who has perfected the art of using racism, anger, fear, hatred and controversy for his own personal gain. Neither he nor anyone in his family has ever served this country. They are a family of grifters, takers and bullshit artists ... Donald Trump chief among them.

Colin Kaepernick and the athletes who have joined with him in taking a knee during the "Star Spangled Banner" are not hateful, anti-American reprobates; they are brave, civic-minded citizens who, at great risk to their careers, their own personal safety, and the safety of their loved ones, are using their First Amendment rights to bring awareness to the very real issues of racial inequality, race-based police brutality, and the need for criminal-justice reform. You don't have to agree with what they're doing, but you do have to be grateful we live in a country whose founding principles are based in part upon their right to do it ... and you do have to realize that many of the veterans who served to defend that right-veterans whom our so-called president likes to invoke and hide behind when attempting to gin up his base—are offended not by people fighting for justice and equality, but by a vile, morally bankrupt, unfit, unqualified, draft-dodging "president" who defiles the presidency with every embarrassing thing he says, who exploits for his own personal gain the flag we served under, and who then claims to speak for us while assuming we support him.

I am heartened by the knowledge that many of us do not.

worried about getting shot while driving around out of uniform in a country I spent 12 months getting shot at for #VeteransForKaepernick pic.twitter.com/ZoNsbCBhtu

My grandpa is a 97 year-old WWII vet & Missouri farmer who wanted to join w/ those who #TakeaKnee: "those kids have every right to protest." pic.twitter.com/LurCj7SLUB
- Brennan Gilmore (@brennanmgilmore) September 24, 2017

The President of the United States is charged with defending and protecting the rights of all Americans. When the guy occupying the presidency describes as "fine people" those who marched with white supremacists and as "sons of bitches" the predominately black citizens who are peacefully protesting the well documented injustices perpetrated against their race-and when that President does so for wholly selfish and political reasons rather than any true concern for the greater good of the country he's supposed to serve-then I believe we must all rebuke him in no uncertain terms.

I've heard and read a cacophony of primarily white voices argue that, if Kaepernick and others wish to exercise their First Amendment rights, they should do it at a more "appropriate" time and/or in a more "appropriate" setting. It is a flawed argument for at least two reasons: 1.) A protest that disrupts nothing accomplishes nothing, and 2.) white people don't get to decide when black people can fight for fair and equal treatment-especially when the injustices they're fighting against a.) primarily are perpetrated by white people, and b.) often are matters of life and death.

It saddens me to know that my stance on this issue puts me at odds with some friends and family members, a number of whom are veterans and/or law-enforcement professionals-and it further saddens me that many, if not all, of those same people support Donald Trump-but I am proud nonetheless to join with the many veterans who believe in Kaepernick's right to protest, and in the reasons for which he is doing so.

I am equally proud to join with other veterans who share my belief that Donald Trump is both an embarrassment and a threat to the country we served, and that he least of all is entitled to use our service as a means of political cover.

Jon Zal is a writer and former U.S. Army Military Police K-9 Handler. He blogs at JonZal.com. His Twitter handle is @OfficialJonZal.