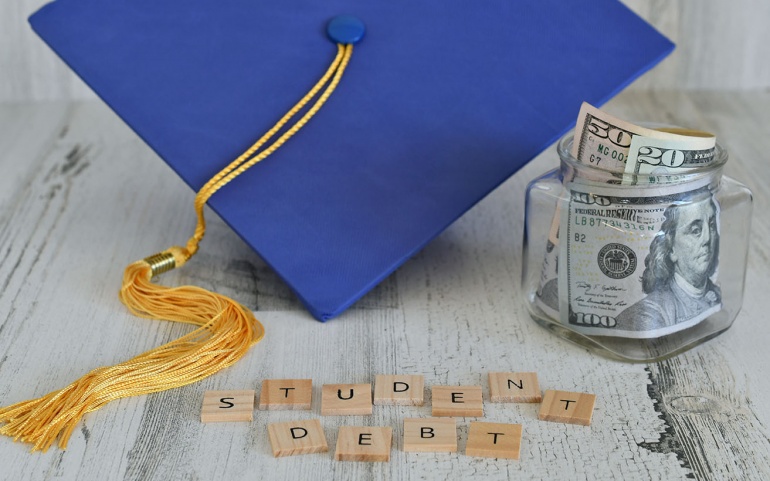 Sam is an eighth grade American History teacher in semi-rural Ohio. He’s great at it. He dresses up as Abe Lincoln to deliver the Gettysburg Address, and his “Best Beards of the Civil War” competition has students discussing important names and dates on their lunch breaks. Each day, Sam’s passion for history overcomes teenage apathy and anxiety and replaces them with an appreciation for the people and events that made us who we are. Sam’s value to the community and to America as a whole is immeasurable.

America’s student loan debt sits at about 1.78 trillion dollars; this is slightly more money than what we gave away to the wealthy in the 2017 Trump tax cuts. Over two-thirds of today’s students take out loans to attend college, and the average amount of debt is just over $37,000, or roughly the cost of a brand-new mid-size sedan that no one ever gets to drive. Educators like Sam are hit particularly hard by this issue, since pricey graduate degrees are often required, but not rewarded financially. According to a new survey done by StudentDebtCrisis.org, “46% of education workers are currently unable to afford their student loans despite federal COVID-19 relief.”

Sam faces these numbers from a relatively privileged position. His wife works, so the home has a second income. Both Sam, his wife, and his kids are currently healthy, and his teaching job is somewhat safe at a time when most jobs aren’t. Things could certainly be worse, and for many of his students, they are. Some of the nicer cars in town can be found parked in the lot at the local food pantry; no one is immune to the troubles. So Sam considers himself lucky, believe it or not, that he only has to pay a quarter of his take home pay to service his loans. But that doesn’t make it right.

This is one story out of many, but it is representative of the larger problem. Over and over we see people making the impossible choice between accepting the diminished opportunity available to those who do not earn a degree, or seeking that opportunity and getting the financial anchor that comes along with it. Today’s young people, taught as toddlers that their dreams are their birthright, they never really had a chance. The student debt crisis is as inevitable as taxes, and as American as a rich man’s yacht.

Sam’s friends and neighbors are proud people; they are not quick to call themselves victims, and they are even slower to ask for help. When they do discuss the student loan debt that many of them owe, they often fall into the same old bootstrap mythology that simply oozes out of right-wing white spaces these days. They assume that college is more expensive because of wasteful spending or some other such nonsense, when the reality is that the people they vote for have been cutting school funding to finance those yachts mentioned above, and have been doing so for a generation now.

In Ohio, for example, state support for the average student dropped from roughly 75% in the early 90s to just over 20% today. That 55% gap between what we used to give schools, and what we give them now, that became tax cuts for the wealthy, and student debt is just us and our children paying the tab. These numbers vary from state to state, but across the board, the trend is the same; everywhere we look, we find cratering support for schools that were once affordable, and predatory lending filling the gap. It’s the oldest of American games. We climb the ladder, then pull it up behind us and blame the next person up for not having a ladder. This is what we like to call “personal responsibility.”

Sam doesn’t know these numbers and neither do his students or their parents with the nice cars at the food pantry. Sam knows he is doing what he is best at, what he feels he is supposed to be doing. He never expected wealth, but he expected a fair exchange of work and value to the community to be met with a humble living free of the constant worry he faces now, and in this expectation, he is all of us. It is not a handout to make good on a deal we promised but never delivered. It is not a handout to tell the truth to the deceived and make amends for our theft of their futures. And it is certainly not a handout to free up the money spent on interest payments so Sam can buy the things that keep his friends and neighbors employed and volunteering at that food pantry rather than lining up in front of it.