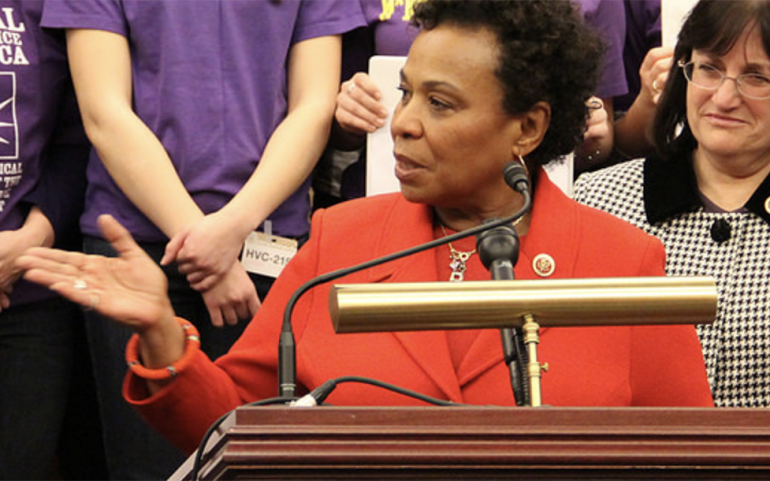 Lee, longtime progressive champion, would be the first Black woman in Congressional leadership.

WASHINGTON, D.C., NOV. 20, 2018 -- Following Representative Barbara Lee’s announcement to run for Caucus Chair, a coalition of progressive organizations, activists and leaders have kicked off the “Barbara Lee for Caucus Chair” campaign. This grassroots action is seeking to generate support for Lee’s campaign to win a seat within the Democratic House Leadership by mobilizing progressive organizations and individuals. The election will be on Wednesday, November 28th.

The campaign is being led by a set powerful progressive organizations, including Color of Change, Common Defense, CREDO, Courage Campaign, Democracy for America, Feminist Majority, Indivisible National, Millennials for Revolution, MoveOn, NARAL, National Organization for Women, Progressive Democrats of America, and the People for Bernie Sanders.

Ady Barkan, who is helping organize the campaign, said, “Barbara Lee is a visionary leader who has been fighting for equity and justice her whole career. The progressive movement—and black women in particular—deserves to have Lee in leadership. I want to do everything I can to help her win."

Congresswoman Lee has shown wisdom and courage on issues of war and peace, opposing the provision of unlimited warmaking authority to the President. She has been a champion for the right of all women — including low-income women — to access reproductive care. On every important issue facing our country, Congresswoman Lee has fought for public policy that promotes human dignity and justice.

Alan Minsky, Executive Director of Progressive Democrats Of America added, "Rep. Barbara Lee's unwavering support of the 99% makes her philosophically the perfect person to be the Democratic Caucus Chair, and her years of experience  promoting peaceful resolutions of conflicts in general shows a temperament that will serve the position well."