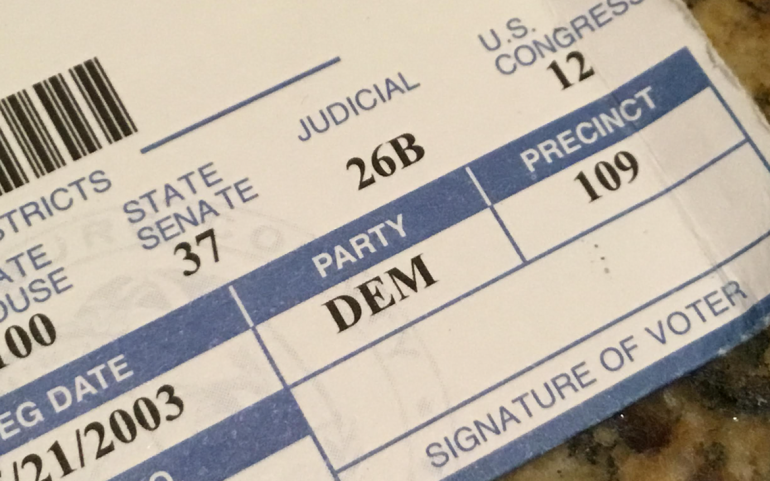 “If there must be trouble, let it be in my day, that my child may have peace.”  -- Thomas Paine

The 2018 midterms are rapidly approaching and Democratic enthusiasm is higher than most of us can ever recall.  As a recent convert to the Democratic Party, I am inspired by our mix of conviction, fury, and energy.  I have hope that we will continue building the momentum necessary to right America’s currently rudderless ship and return control of our nation to ‘We the People.’

Enthusiasm aside, I believe Democrats are a bit too focused on what we are fighting AGAINST.  Of course we should fight against bigotry, misogyny, Russian meddling, and the assault on our Bill of Rights.  We are rightfully appalled at the rollback on environmental regulations and the naked cruelty of the DACA repeal.  We are infuriated at a POTUS who incessantly works to concentrate his own power, demonstrating his lack of knowledge or concern that America was founded in direct opposition to authoritarianism.  It is tempting to spend all of one’s waking time merely opposing Trumpism instead of realizing the goals of our movement.

I think all Dems agree that our ultimate goal is to place ‘We the People’ back in control of America.  If we merely oppose Trump, we allow a conspiratorial con man of middling intelligence to define us.  We are much better than that.  We need to construct a platform of beliefs to launch our candidates into Congress and beyond.  On that note, I’ve constructed a succinct, four point set of truisms which will serve our party well in critical upcoming elections.  We must sustain our energy while continuing to win even more hearts and minds if we are to ride this Blue Wave into November.

#1:  American Independence is sacrosanct and non-negotiable.  There is a Kremlin cancer in this government.  It must be cut out before it metastasizes further.  The Trump Administration’s links to Russia, the 22 indictments and five guilty pleas in Mueller's investigation, and the tepid responses by Team Trump to Russian aggression in the West illustrate America’s pitifully soft position on this dangerous global superpower.  While military action against Russia doesn’t yet seem necessary, our leaders must develop the spine to defend us from Vladimir Putin and his band of murderous Stalinists.  Stiffened sanctions, expulsion of diplomats, freezing of Russian oligarchs’ financial assets in the West, and strengthening of American cyber security were needed months ago, yet still aren’t happening.  If we want Putin out of American government, the first thing to do is stop holding open the door for his minions.  The time to get tough on Russia is dreadfully overdue.  Without our independence as a nation, all of our other rights as Americans are negotiable.

#2:  Human rights are for all humans.  Say it with me – BLACK LIVES MATTER.  Acknowledging that African-Americans are more likely to be poor, disadvantaged, and to feel the “long arm of the law” doesn’t take any rights away from white people.  Slavery was only abolished about five generations ago, and social mobility is excruciatingly slow.  Empowering all disadvantaged Americans, especially African-Americans, with the tools to achieve that mobility improves our entire society, not just a segment of it.

Additionally, a woman’s body is her own.  Readily available contraception gives women an element of control in their own lives, as well as saving millions of dollars.  I see nothing wrong with discussing subtleties and nuances regarding abortion, but Roe v. Wade was decided almost half a century ago.  An abortion prior to the age of fetal viability should remain legal.  There should be room to individualize options in cases of rape, incest, or imminent harm to the mother.  The abortion debate is not going away, and Democrats should remain steadfast in their resolve to uphold basic points of it.

In a similar vein, Democrats should continue to fight the attempted scapegoating of entire races, religions, or orientations of people.  It is infuriating in 2018 to see American Jews, Muslims, the disabled, Latinos, or LGBT individuals singled out for threats, ridicule, and physical violence.  Being nice to everyone cannot be legally mandated, but hate speech, threats, and the incitement of violence should be recognized for the crimes they are.  There is no room for bigotry in this movement, and our unity as a party will be strengthened when we all commit to this tenet.

Human rights abuses continue around the globe, and especially in places like Syria, Yemen, and sub-Saharan Africa.  The United States cannot fight these battles alone, but it does carry enormous responsibility to advocate for those who are at risk.  We must renew our commitment to the United Nations and NATO to ensure massive, sustained efforts exist to help those who need it most.  Throughout her history, America stood tallest when she used her strength to fight for those who couldn’t fight for themselves.  History has proven that a stance of American nationalist isolationism brings horrors and financial ruin for the US and the rest of the world.  America can either learn the painful lessons of history, or she can repeat them.

#3:  A full-time worker deserves a living wage.  America is capitalist by design, and though capitalism has inherent evils, a capitalist society which is able to balance the opposing, but mutually-dependent forces of capital and labor can thrive.  The United States, and much of the world, is out of balance.  Income inequality and wealth distribution in America have trended such that a miniscule, highly privileged few force the majority of our population to struggle financially or live in abject poverty.  Surely, inequality is a fact of life.  An overly burdensome tax or regulation code is destined to suppress the innovation and ingenuity which help define America.  But there is a balance to be struck, and a healthy society aims to create an economy which allows every worker a chance to enjoy some actual fruits of their labor, instead of the need to toil perpetually for mere survival.  Every American who works a full-time job, however unskilled, should earn a living wage.  The revised GOP tax code which favors corporations and the ultra-wealthy places an increased burden on the very Americans most ill-equipped to handle it.  Additionally, the right of workers to unionize should be wholeheartedly supported.  For working Americans, there is no bargaining without collective bargaining.  The Democratic Party has historically been the party of working Americans.  It’s time to reclaim that honor.

#4:  Congress was designed to represent the people, not corporations.  Political lobby money, super PACs, and corporate mega-donors have warped our representative government into a dystopian yard sale.  Ever-increasing numbers of Americans are killed due to mass shootings and gun violence, but a bought off Congress lacks the courage or conviction to stand up to the NRA and its money.  This example highlights the problem of placing corporate interests above the interests of the populace as a whole.  The NRA is based on an industry which boasts about $10 billion in revenue.  Those who advocate sensible gun reform generate no revenue.  As it stands now, the political machinations in Washington will always favor those who can spend more.  This has to change.  “Citizens United” must be repealed.  Congressional votes were never intended to be sold to the highest bidder; they are intended to reflect the collective will of the constituents represented by each Congress member.  The amount of money flowing through Washington to influence Congressional votes has bred a degree of corruption which would have been unfathomable to the Founding Fathers.

I was heartened to see some Democratic Members of Congress vow to refuse corporate super PAC donations in the future – Connor Lamb won his improbable victory in Pennsylvania without a dime of corporate super PAC money.  Yes, it takes money to win big elections.  The reality is that American candidates stand little chance of winning high-level elections without PAC donations.  But Dems should recognize that money raised via small donations in a grassroots manner is most important, because this money speaks for the people.  If the people are to control this country, we must wrest the reigns away from corporations which write their own laws by throwing their weight and money around.

The 2018 midterms are a crossroads for America.  The path of the Trump Administration leads us off a cliff, and if we continue our current course, that’s where we are headed.  We don’t have to turn 180 degrees to save this nation – we just have to veer left and guide her back onto the path of independence and common decency.