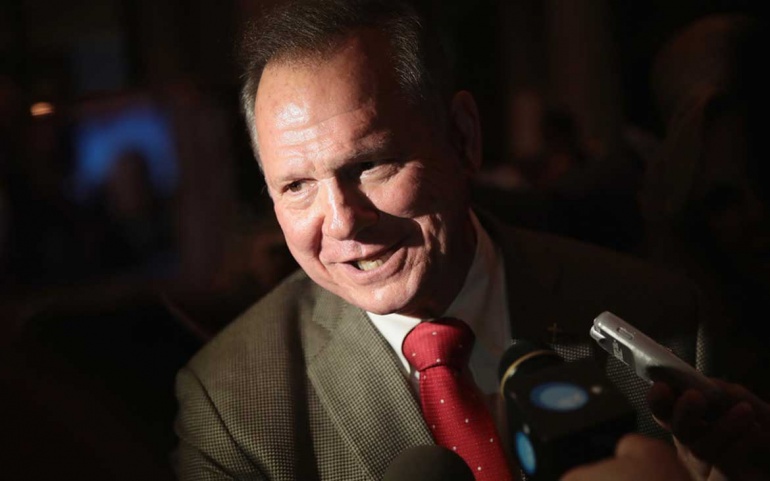 Let’s begin with what is known. On November 8, 2017, Alabama Republican Senate candidate Roy Moore held a lead on his opponent of anywhere from seven to ten points, depending on the poll referenced.

On November 9, 2017, The Washington Post published a bombshell article detailing a number of allegations of serious sexual impropriety, and at least one case of sexual assault, all based on the accounts of women who were, at the time, teenagers.

The article goes on to tell their stories in great detail. It even explains their reasons for not speaking up until now. After all, the stories are nearly forty years old, and stem from a time in which Roy Moore (now 70 years-old) was a 30-something assistant district attorney for Etowah County in Northern Alabama.

While the immediate response to the story was what we would expect it to be, it didn’t take long for the shock and anger over the acts themselves to be overshadowed by the shock and anger with which Roy Moore’s supporters answered back. The campaign itself fired the first salvo:

“National liberal organizations know their chosen candidate Doug Jones is in a death spiral, and this is their last ditch Hail Mary.”

“Judge Roy Moore is winning with a double-digit lead. So it is no surprise, with just over four weeks remaining, in a race for the U.S. Senate with national implications, that the Democratic Party and the country’s most liberal newspaper would come up with a fabrication of this kind.”

And while claiming that the whole thing is all a big liberal conspiracy might not fly in most parts of the country, in Alabama the only words more popular than “fake news” are “Roll Tide!” But then things changed; the defenses offered by Moore’s supporters started taking on a really ugly and familiar tone:

First, Alabama’s state auditor went biblical, reminding us that “Mary was a teenager and Joseph was an adult carpenter. They became parents of Jesus.”

Bibb County and Covington County GOP Chairs both said they would still vote for Moore over a Democrat, even if they had proof.

And pulling one right out of the victim-blaming handbook, Alabama State Rep. Ed Henry said “If they believe this man is predatory, they are guilty of allowing him to exist for 40 years. I think someone should prosecute and go after them. You can’t be a victim 40 years later, in my opinion.”

Shortly after these defenses were presented, the Moore campaign went looking for cash. That’s right; after being accused of acts that would make any decent human being vomit in disgust, Roy Moore went fundraising. 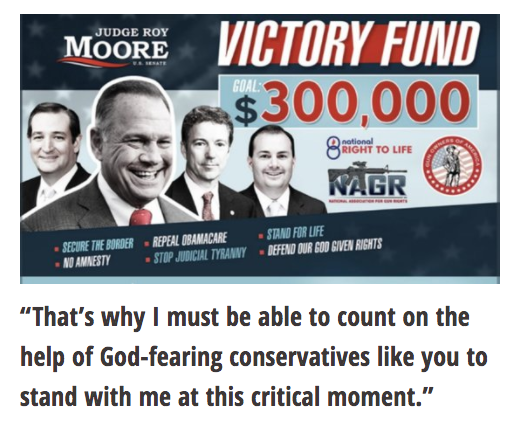 This is most of what we know, but there is one more thing that we just learned.  As of Saturday, November 11, 2017, according to the most recent polling, Roy Moore is still in the lead.

Let’s be clear: After reading a story that no one could possibly ignore, a story in which four women who have never met make shockingly similar claims of sexual misconduct, including one vivid story of sexual assault on a child, public opinion shifted by less than seven percent.  People either denied, justified, or simply didn’t care. Knowing this, it’s probably safe to say that Thursday night was a pretty good fundraising night for the Moore campaign. A charge of sexual assault on a minor was almost certainly, in a financial sense, a big win for the campaign.

When asking around about this, I got a number of interesting responses from smart people in a variety of fields, but many simply dismissed it with clever comebacks like “Because Alabama.”

Surely it must be more than this. I’m not from Alabama, but I refuse to believe that any state, even one with Alabama’s long history of inhumanity, injustice, and just plain old indecency, could actually endorse something as vile and wretched as pedophilia. Not even Alabama would do that. There has to be another reason.

After questioning friends and colleagues, I turned to social media as a part of my research. It was only then that I put my finger on what was really going on. I’ve heard pundits and talking heads chatter on about tribalism and the massive, unprecedented divide between right and left in today’s politics, but not even Trump could show me this with the absolute precision that Roy Moore’s tighty whities could offer. As I read the replies, mentions, tweets and retweets; as I listened to people call me a Demorat, a cuck, a libtard, a communist, and so on, all for defending a woman who was once a little girl abused by an older man with power, I had what some call a moment of clarity, and I shared it with my wife.

“Honey, do you believe in God?” We’re fairly regular church-goers, so she thought this was an odd question. “You know I do,” she said.

“But what if I had proof that He wasn’t real?”

“Seriously. What if?” She gave me the fish-eye, the one that lets me know she not going to put up with much more. “That would never happen,” she said.

I continued my line of questioning until she eventually threw something heavy at me, but she never budged an inch. Never, not with any evidence of any kind, will I ever shake her belief in the existence of God, not that I want to.  It is a belief she has no evidence for, and will accept no evidence against.  This is what it means to have faith; it is not knowledge, but it is unshakable. And if God asked her to ignore a little girl’s pain and vote for a pedophile, she would get in line and do it, just as Abraham obeyed God’s command to sacrifice Isaac, his own son, as an act of faith and devotion (Gen 22:2-8).

Faith is a decision. It is a choice we make, or don’t, but rarely if ever is that choice made using logic. It’s an emotional decision, and this is what makes it precisely the same as the decisions made by Alabamans after hearing that Roy Moore is almost certainly a pervert of rather extraordinary proportions. They just didn’t accept it. It had to be false, and even if it wasn’t, he was still a better option than voting for a Democrat. This is how far tribalism has come; it is no longer even a matter of logic at all. It is now a matter of faith, and as surely as Abraham would have plunged that knife into his own son’s chest if God had not intervened, Alabamans will pull the lever for Roy Moore on December 12, and they will likely elect a pedophile to the United States Senate, all as an act of worship in service to their beloved GOP. 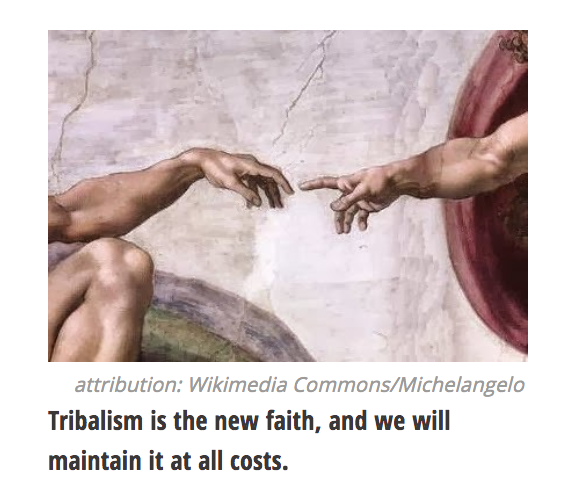 This is perhaps the proper time to explain that this is not a partisan argument. Sexual impropriety has no party, and through the years, many perpetrators from both major parties have been exposed, shamed, and ended. Some have survived the accusations, but most don’t, at least not politically. But these days, with a tribalist in the White House and several more running a right wing media juggernaut that sees liberals and Satanists as one and the same, even the simplest of logical missteps is easily overlooked by an audience that long ago abandoned facts for faith.  As evidence of this, I offer the following: The same people who raged in response to a ridiculous fake story about a Clinton-run child sex ring in the basement of a pizza place that had no basement are the ones who are immediately willing to dismiss any and all accusations against one of their own. Pizzagate is real, and Moore is innocent, and both decisions were made without a moment’s thought, even though they directly contradict each other.  A fictional story made up by an alt-right baby-faced monster is instantly and fervently believed, yet a story of abuse with over 30 sources, compiled and reported by one of our nation’s oldest and most prestigious newspapers is instantly denied as fake news. It’s not logical. It’s tribal.

Our forefathers, who created the first chapters of our national story, were men of the enlightenment. While certainly not perfect, they sought a better world. They valued both faith andscience, tradition and change, right and left. And above all, they valued reason, debate, and the coming together of many different ideas and thoughts.

You’re not thinking, Alabama. You’re worshiping, and it’s time to lift up your heads.

Nov. 15 Update: As of this morning, Roy Moore has increased his lead in the polls to six points, even after another accuser goes on record with reports of a sexual assault that occurred when she was 16.  Also, there are several reports that Roy Moore had been banned from the Gadsden Mall years ago, due to his many troubling advances on young girls.  Details can be found in The New Yorker.

Brett Pransky is your standard Midwestern English professor, minus the tweed jacket, the bushy beard, and the pipe. When he’s not using his red pen to combat the evils of the comma splice, Brett can be found at his desk, fighting larger injustices and proving to as many people as he can reach that the essay is still the most powerful form of argument in American public discourse. Brett holds degrees in English, Philosophy, Rhetoric, and Business, and while he is terribly uncomfortable talking about himself in the third person, he’s not going to let this keep him from showing everyone that the best way to change the world is to throw clever sentences at it.  Brett can be found on Twitter @BrettPransky.
Featured Image: Getty Images
Tags: #Al-Sen, #Alabama, #DougJones, #politics, #RoyMoore, #Tribalism