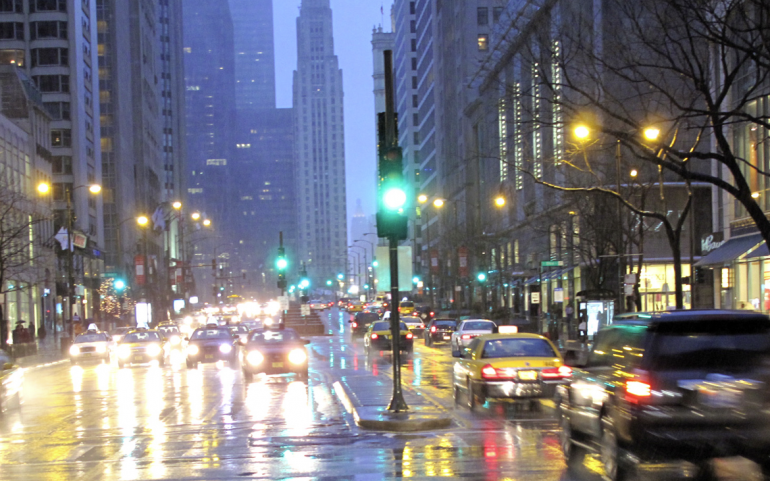 It was a cold night on October 30, 2017, in downtown Chicago. I was in line, outside, with hundreds of people waiting to hear a speech. I saw people from all walks of life. The ladies from the Gold Coast, the men from the south side, the nice, elderly ladies from Suburbia, the college kids from universities far and near, and everyone in between. Who, on this cold night, were all of these people in line to see?  None other than the former Secretary of State, Hillary Clinton.

As we took our seats, the room was electric. Hillary took the stage around 7:30 p.m. She was insightful, funny, charming even. It was one of the greatest delights of my entire life. Near the end of the night, Hillary spoke of her election night loss. The entire evening I felt great, but in that moment I felt something else. I felt an overwhelming sense of sadness. Not just sadness because she lost the election, but sadness because every single American, whether they know it or not, lost that night also. As I left the venue I could think only of three things:

The third question was on my mind the entirety of the following day. She is the single most qualified person in our nation to ever run for President. Hillary Clinton earned a J.D. from Yale in 1973 and served as a congressional legal counsel, all before she married President Bill Clinton. In 1977 she co-founded Arkansas Advocates for Children and Families. She was also the first woman to chair the Legal Services Corporation in 1978. Hillary went on to become the First Lady of Arkansas from 1983 to 1992.  While First Lady of Arkansas, Hillary became the Chair of the Rural Health Advisory Committee, where she advocated for the poor. In 1992 she became the First Lady of the United States. While in that position she was a constant advocate for women and children. In 2000, she ran for the New York Senate seat and won. She advocated for her constituents in the aftermath of 9/11. In 2008, after an unsuccessful run for President, she was appointed Secretary of State.  I am typically drawn to candidates who have experience in the field, but with Hillary, even with her experience, I felt no excitement over her candidacy. After internally pondering all day, the answer finally hit me: I wasn’t eager to vote for Hillary Clinton because of an archaic image I had developed of what a “good” woman should be.

For the record, I am not sexist; I fully believe that women should be limited by their skill set and nothing more, like their male counterparts. With Hillary, however, I subconsciously wanted her to be more maternal. As a child, I was taught that being a mother was the most important job a woman could have. This was repeated to me as a young boy by family, movies and media. Many men tend to view women who have reached the end of their twenties as nothing more than a maternal, motherly figure. Yes, being a mother is an important job. However, the problem with this line of thought is that it is not EVERY woman’s job to be MY mother. It was never Hillary’s job to be maternal as a candidate for the highest regarded office in the United States. We as a country were electing someone who, if need be, would go to war to defend this great nation. We were not electing someone based on their ability to successfully make banana nut bread.

Men, in large measure, are taught that women are there to nurture us, coddle us, and treat us delicately when we are going through a difficult or stressful time. When women don’t exemplify these tendencies, some men view them downright negatively. This is how women unfairly become associated with words like “b*tch.” Women, in large measure, are taught to be agreeable, accommodating, and passive. All of this, solely in an attempt to not “earn” the title of “b*tch.” Hillary Clinton was none of the above-mentioned qualities in public during the election because these are horrible qualities in an effective leader. That is the juxtaposition that women face when they try to become leaders, as it completely contradicts everything they have been taught about being “good” women. It is the way we, both men and women, were raised that has handed us all the biggest loss in this nation’s history.

Hillary Clinton could have been the greatest President this country has ever seen. She did win the popular vote (it should be noted that she won more votes than ANY white man in the history of the United States), but what she didn’t win were the hearts of the voters. Hillary wasn’t running to be our mother, our friend, or the charming lady in the office who can’t figure out how to use the scanner. We, as a nation, should have held her to the same standards that we hold all candidates who run for President. Unfortunately, we did not. We held her to the same standards that we hold Julia Roberts doing a Barbra Walters interview. We expected her to be endearing, not strong.  We expected her to be well-dressed and unprepared. We expected her to be smart, but not strategic. During the campaign she stated facts, she had a clear-cut plan for every agenda about which she spoke, and she was honest. Hillary ran her campaign in a dignified manner that should have made America proud. What Hillary Clinton taught America is that sexism still exists. What Hillary Clinton taught me was much deeper and more profound; she taught me that I am not entitled to have ANY WOMAN handle me like a baby, but like the adult man that I am. For that, I am eternally grateful.