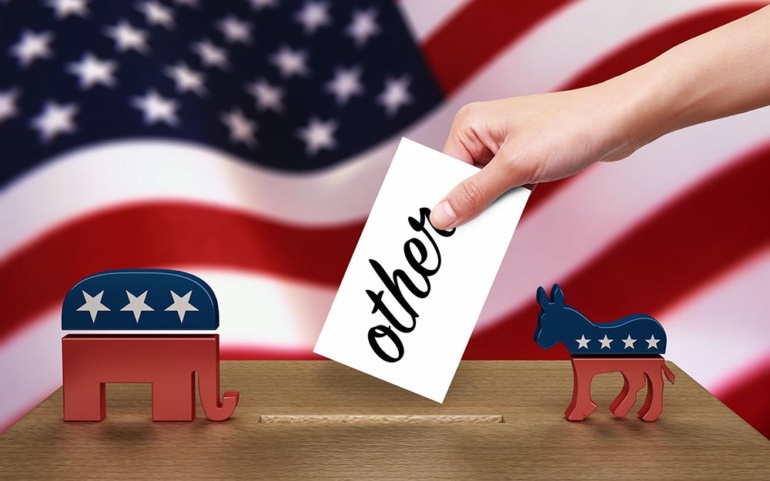 The Trump administration is actively deconstructing America’s democratic values and processes, but there is an even more dangerous underlying consequence of Trump’s rise to power. Too many people — especially those on the left — believe the fallacy that either Trump’s removal or his failure will automatically restore the nation’s balance. Uniting against Trump does instill a sense of purpose and strength for a majority of Americans, but unification must ultimately include a broad range of diversity in political representation for the survival of democracy.

According to the European Election Database, ten major political parties will vie for seats in Italy’s next election. In other European democracies, the number of major political parties varies from six and eight in Germany and Switzerland, to seven in France. Each of those countries has an abundance of minor parties registered with national election councils. In Canada, Elections Canada identifies five major parties sharing the table with eleven other minorities. An interesting note about the democracy north of the U.S. border, is that very often the federal party branch may have little or no semblance to the local party objectives. Most democratic nations have developed a broad scope of major and minor political parties that represent the diversity of their populations.

The United States, the so-called world leader on all topics democratic, can learn a lesson from its closest neighbor and European allies. Since 1852, America has been saddled with a two-party system that forces voters to choose between the constantly warring Democrats and Republicans. For the past century and a half, the two parties that govern the United States have been pigeonholing Americans into uncomfortable and cramped categories. For a nation built on diversity, it is insulting to make voting decisions like a test-lab monkey; flicking a red switch or a blue one.

The present crises facing the nation and Congress did not begin recently with the inexperience and unpredictability of Donald Trump. They originated as early as 1796 when men in Washington, D.C. — and other seats of government and power — pursued what evolved to a consolidated two-party system by associating their campaigns with either Federalists or, ironically, Democratic-Republicans. There is little suggestion or evidence that the founding fathers intended America’s democracy to grow into a polarized partisan system of only two choices.
The two-party system dominated by republicans and democrats for the past 200 years not only limits voters’ choices, but it narrows the political principles and agendas represented in government. Unfortunately, it is also self-perpetuating. Once the red-blue vortex of conservativism and liberalism caught America, it was like a sinkhole sucking down the creative juices of the budding young democracy.

For years, a third choice — the bland, and equally non-creative amorphous Independent party has tempted some American voters. The press and public have ridiculed recent independent candidates as the scourge of elections because they draw away pivotal votes from the main contenders. In reality, however, a third, fourth, or fifth party addition would strengthen the nation’s democratic model and ensure that mistakes like Trump never happen again.

America’s founding fathers imagined a system of government where the people voted and distributed power across the various branches of government. Beyond the basics of checks and balances, multiple parties further the fundamental goal of eliminating what frightened the framers the most — consolidated power. Even as Congress pushes back against the current administration, the collapse of the Republican Party and the threat of two parties joining forces in opposition to Trump presents a new hazard in the prospect of emerging as a one-party nation in four years.
If America exits the dark tunnel of the Trump regime, but does so with only one major political party, the nation and its people will have lost. A one-party system represents the very consolidated power that terrified the founders. The fewer the parties, the more danger there is in tyranny, abuse, control, and a collapse to some unitary form of rule that will fail democracy’s most basic test.

When Democrats and Republicans in Washington begin speaking of joining efforts to defeat Trump, it is unsettling, not in a political sense, but because it is an unstable step in a short-term solution to a long-term problem. For the past two centuries, one poor decision after another has increased the consolidation of power that threatens democratic values. From dueling two-party elections to the elimination of Super PAC regulations, each minor change has caused a significant ripple effect on our nation’s democratic functions.
In Stephen Hawking terms, our government began collapsing to a black hole a few years after the Declaration of Independence was signed. When the present two-party system reaches singularity proportions, democracy will fail, and Donald Trump is ushering us across the event-horizon too quickly.

In a system that functions with limited definition and an often-arbitrary application of rules — because of its very nature of protection from abuse of authority and power — it is a tragic irony that we have such constraining chokeholds on the expansion of political parties. The United States is the land of opportunities and choices.

Americans have 25 brands of coffee to choose from at the grocery store; 50 kinds of yogurt; hundreds of pastas; and entire aisles of cereal, bread, chips, and soda. As a nation, and a democracy, we should be able to do better than having to pick either red or blue in the voting booth. There is a rainbow of colors we are not using to represent the people of America, and like all rainbows…ours is fading.

Einar Rathgeber is a reclusive freelance writer and partner with Idea Dogs Media. He is a passionate advocate for civil and human rights issues. With a degree in writing and over ten years of legal experience, he believes that anyone’s pen is mightier than their opponent’s sword.
Einar can be contacted directly if necessary at einar.rathgeber@protonmail.com
Tags: