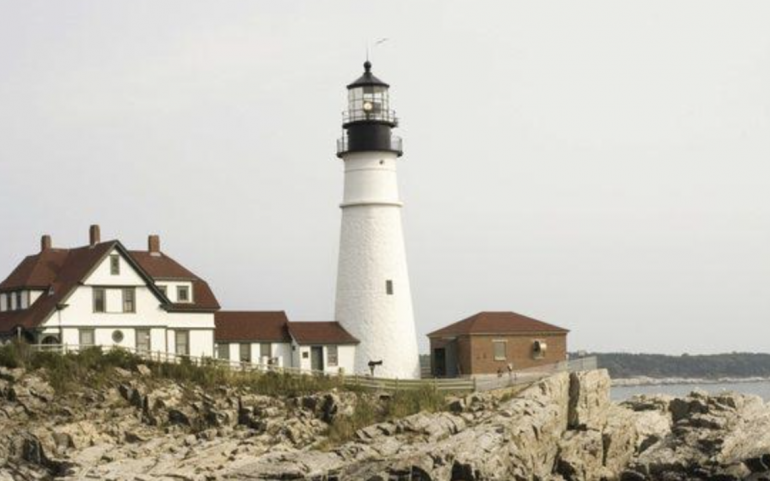 Like the Founding Fathers, I strongly support the separation of church and state.  But like the Founding Fathers, I arrive to every political discussion carrying decades of Judeo-Christian teachings in my mind.  I am not naïve enough to pretend my religion doesn’t influence my thoughts and behaviors, I rather hope that it does.  I’ve read a lot about Jesus, and I’ve concluded that He was a kind, patient man who fiercely advocated for the disadvantaged.  And so anytime His lessons influence me to action, I view it as a good thing.

Our family doesn’t make it to church every week.  Work, sports & activities, travel, and sometimes poorer excuses keep us away.  But when we go there as a family, no one ever leaves disappointed.  Each church service we attend together strengthens our bonds, and the parables discussed there enlighten all four of us, even our Kindergartener.  This week was no exception.  I arrived at church like I typically do, with my head in the clouds, pondering politics, world events, and when I’d get to exercise later.  The news of the Special Counsel’s indictments against Kremlin agents and Russian corporations was fresh in my mind.  I understood my country had been attacked, and that the attacks were ongoing.  I also understood that my POTUS has yet to do anything to defend my country, and that his inner circle is currently swept into an investigation of a conspiracy against America.

I’m a “big picture” thinker.  When I am confused or troubled, I tend to retreat back to the top of the hill and view the maelstrom from higher and at a distance, in hopes of gaining more clarity.  I imagine this is much like how a quarterback heads to the sidelines after a scoreless possession and looks at aerial photos of how the defense was aligned on various plays, or how a general views a map of where his forces are stationed, as well as his enemy’s numbers and the location of his encampments.  When things are unclear, it has always made more sense to me to zoom out instead of zooming in.

So zoom out with me, if you will.  About 250 years ago, America fought a war to become America.  The colonials lined up against the greatest military power on Earth at the time.  Why did America fight its bloody Revolution?  Upwards of 35,000 Continentals died in that seven year war, and our frequently barefooted soldiers literally starved and froze to death during its winters.  In what did these early Americans believe so strongly to justify risking so much?  They believed that they were not beholden to a king, and they would risk their lives to fight him.  They believed that the American people, not some rich, coddled European ruler thousands of miles away, should make the laws which govern America.  They believed that, for generations to come, Americans should be the ones running America.  They believed in American Independence.

Quite miraculously, the War for Independence was won by the American colonials.  Without that victory, the Declaration of Independence would have been nothing but a piece of paper, and those who signed it would have met a traitor’s fate.  The reason the Constitution followed the Declaration and Revolution should be crystal clear – without independence, a nation exists only in hearts and minds.  Only when a nation gains independence from foreign powers does it exist on terra firma.  Independence is the solid bedrock upon which America was built.

I imagine that for most Americans, there was a point in each of our lives when we understood the vital role independence plays in the existence of our country.  I aim to re-awaken this point, and again place it at the forefront of American minds.  Without a rock solid foundation of independence, America’s house cannot weather a storm.  Without that foundation, America’s house will collapse and wash into the sea.

Today, a previously unthinkable attack on America’s Independence rages.  We’ve recently learned that Russia’s “election meddling” spoken about for over a year was much worse than just meddling.  It was a conspiracy against America, unprecedented in scale or scope.  Though there is clear evidence that Kremlin agents intended to “sow discord” in America, we mustn’t lose sight of the fact that Vladimir Putin wanted anyone but Hillary Clinton to be elected POTUS.  The Kremlin desperately wanted an American POTUS who would soften our nation’s stance on Russia, as well as a weakened American commitment to NATO allies.  In helping to elect Trump, it achieved both of its goals.  "Washington is ours," said Aleksandr Dugin, Putin’s éminence grise after Trump’s surprise victory last November.  Trump’s refusal to enact a new Russia sanctions bill, which sailed through Congress in a combined 517-5 vote and he himself signed, should infuriate Americans not only because it makes a mockery of the separation of powers outlined in the Constitution, but also because it illustrates his deference to Putin.  Are we truly independent if our POTUS places Russian interests above the will of the American people?

As the Mueller probe piles up indictments of both Russian and American actors, the Trump camp continues to crow, “No collusion!”  I imagine that in regards to semantics, they are correct.  This wasn’t collusion.  It was, and is, a conspiracy.  The Russians, non-NATO aggressors whom the US was actively sanctioning, found willing co-conspirators in the United States to cooperate with them.  They conspired in secret, and intended to hide their actions from American intelligence and law enforcement agencies.  Their only hint of shame is the furious manner in which they attempt to cover it all up.  Among many others, the President’s own son is an undeniable participant in this conspiracy.

It isn’t a stretch to assert that these American conspirators have willfully placed the nation, as well as her very independence, at risk.  I imagine the Kremlin courted some of them due to their actual debts and bankruptcies, and others due to their moral ones.  Whatever the reasons these men hold for aligning with a hostile foreign enemy, we should understand that the conspirators in the Trump campaign and administration weren’t chosen in spite of their lack of honor, shame, and reverence for American Independence.  They were chosen because of these character flaws.  The utter disregard for American Independence among them isn’t a bug – it’s a feature.

Each of the conspirators must be discovered, prosecuted, and punished to full extent of American law.  Our nation’s independence is neither partisan nor negotiable, and there are plenty of politicians, pundits, and rank and file Americans across the political spectrum who recognize this.  Each American who values our nation’s independence should join voices and shout for justice.  We must rid ourselves of those who jack-hammer away at America’s foundation.  If the rock of independence is broken, the entire house lies in peril.  If Americans wish to save our house, we had better focus on saving its foundation.