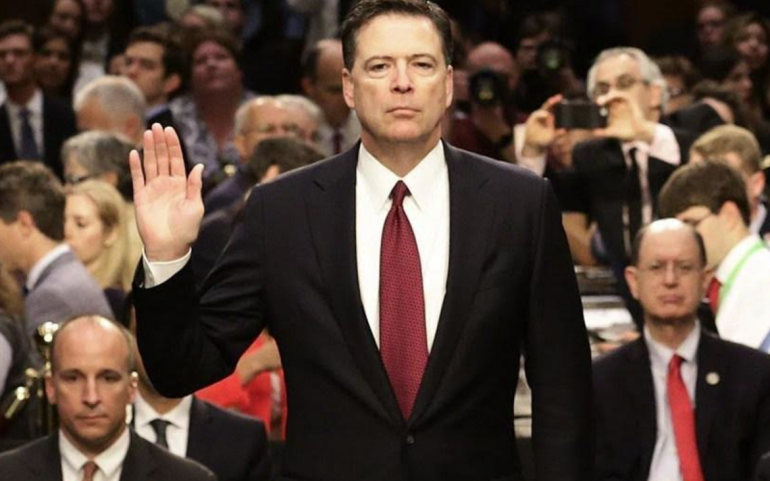 I’ve had some time since last summer to process the events surrounding former FBI Director James Comey’s firing, as well as his role in influencing the 2016 Presidential election.  My opinion is now solidified.  The man is a well-read, loyal, experienced, humble, and passionate American throwback.  He is Donald Trump’s character foil, for he is everything Trump is not.

I didn’t know what to make of Comey prior to the 2016 election, and was somewhat dumbfounded when he publicly announced an ultimately unfruitful investigation into Hillary Clinton shortly before Election Day.  Initially, Comey seemed like the movie character whom the viewer can’t really decide to love or hate until the final scene.  When he was fired by Trump this past May amid the simmering Russia scandal, my understanding of the man was clouded further.  Whose side is Comey on?  Does everyone hate him, or are his fans fair-weather ones?  Now, through the retrospectoscope, the answers to those questions become clearer.

Former Director Comey is a NY/NJ raised kid who double majored in chemistry and religion (a natural match, honestly) at the College of William and Mary in Williamsburg, VA.  If you haven’t been to Williamsburg, it is a beautiful and historic colonial town which celebrates revolution-era America.  It is steeped in American history, and every breath of its people whispers the spirit of American Independence.  Williamsburg is a stone’s throw from Jamestown, VA, America’s first successful English settlement.  It’s also a country mile from Yorktown, VA, the site of British General Cornwallis’ surrender.  Our nation may have been conceived in Philadelphia, but she was delivered at Yorktown.  Former Director Comey spent a few years immersed in the early history of our nation, and his behavior over the last few months makes it quite clear that he romanticizes the founding ideals of America.

This past June, I was awestruck and inspired to see that after 57 years as a citizen, and 24 years in public service, Mr. Comey still romanticizes American ideals.  “We remain that shining city on a hill, and Russia doesn’t like it,” he passionately expressed in his hearing.  “The reason this is such a big deal is, we have this big, messy, wonderful country where we fight with each other all the time.  But nobody tells us what to think, what to fight about, what to vote for except other Americans.  And that’s wonderful and often painful.”

Wow.  He is an American Idealist at age 57.  I was floored.  Proving his scholarship, he went on to quote Henry II prior to the murder of Archbishop Thomas Becket in 1170.  He was quaint (“Lordy”), he was humble in acknowledging potential wrong turns, he was funny (“it would be like feeding seagulls at the beach”), and at times he was refreshingly self-deprecating (“maybe if I were stronger, I would have”).  He is an everyman whose talents and dedication make him an extraordinary American.

As an aside, I urge you all to re-watch the Comey testimony from last June, and understand that then, Republicans like Richard Burr (R-NC) and others promised a dedicated non-partisan approach to Russian interference in American affairs.  We all should ask ourselves whether this is truly happening now, or not.

Another point of clarity gleaned during the public testimony was why Mr. Comey felt it necessary to publicly mention the Clinton e-mail investigation so close the upcoming election.  He found out about Bill Clinton’s nudge to then AG Loretta Lynch regarding Hillary’s email investigation.  Perceiving impropriety, he felt it necessary to notify the American people if no one else would.  It was not a Democratic move, and it was not a Republican move – it was the move of an American sworn to protect his country.  If we are able to understand why he did this, we may understand why his interactions with Mr. Trump were so awkward and problematic.  If an honest man had a chance to do it all over, he would do it all over again.  Such is James Comey.

The FBI, though housed in the Executive Branch, is to function independently of the White House.  A request for loyalty, a “hope” to end an ongoing investigation, and repeated questions by the POTUS (in confidence, I might add) as to whether he is the subject of an investigation, are out of bounds to an FBI Director.  Mr. Comey states that he was taken aback and stunned, and I believe him.  Eventually, he asked his boss, the AG Jeff Sessions, to intercede because of the impropriety.  Ultimately, Mr. Comey was fired by a nervous boss who couldn’t secure his loyalty.

I’d like to think that all of this comes down to whether the American people believe a measured, intelligent man with 24 years of public service experience, or a bigoted, misogynistic huckster who continues to behave like it is his first day on the job.  But it doesn’t.  It comes down to whether the GOP Congress members want to continue rolling the Trump turd in glitter, or flush it down and wash their hands.