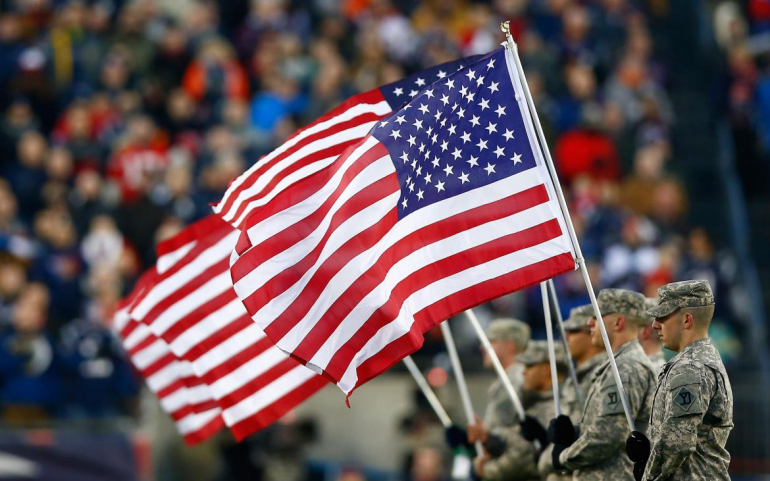 For the few of us who have had the honor of being part of the U.S. military, we swear an oath to obey the orders of the officers above us and, ultimately, the President of the United States. We are citizen soldiers who serve those who elect the Leader of the Free World. During my time in the Army, from 2004-2009, I had to serve the orders of President George W. Bush.

This was mostly in combat and I, a liberal far to the left of him and many of the officers above me, did what I was asked to do. Some of those officers, to include generals, have come out in opposition to the same orders we once followed. This is our cross to bear and it is difficult to square the choices we made when in the military and when we return to a place that so many of our fellow citizens do not understand—the cites and towns we once inhabited.

One thing I did not comprehend upon my return from military service was how deeply the services had buried themselves in popular culture, including in the National Football League. For the past several years this served the interests of the NFL and military as well. The owners and players could feel close to a sacrifice they would never understand but also wanted to honor the servicemen and women who had long wanted to play in a sport they had long admired.

Like most everything, Everything changed following the elections in November of 2016. Many of us saw the future president, Donald Trump, using troops as he had used tax loopholes: a means to bring him accolades. He continues this through present day. Trump will never understand the reality of what so many of us faced.

The President uses veterans as a cudgel to achieve his selfish aims just as he is using NFL players as a means to an end. Those players, who should see the brutality of the authoritarianism and the lottery they won becoming the new elite of America, would best realize the difficulty of their new situation.

In the military, I had to follow the orders of those above me. NFL players have contracts of service too but they have the collective power of a player’s union and an ability to stage walkouts or strikes that the military does not. While they signed a contract or have agents who provided them with largesse, they do not face decades of military prison for walking away. They have a national stage to provoke action yet only face the loss of potential earnings and a career at a time when this nation faces yet another dire, existential threat.

If I, an enlisted leader who worked with some of the most elite forces our nation has ever had the privilege of enjoying, had a choice at this moment in time I would choose to do something that demonstrates the danger our American democracy now faces. I would stop playing. I would kneel. I would not play as my masters want me to. I would be as disobedient as possible. The nation is watching the behavior of these sports celebrities with the same interest as they do the troops. Popular culture has tied us together and we can do something so powerful with it.

This would break contracts and deals. It would place so many in the spotlight. But this moment exists as a means to put pressure on those gave us the struggle we are now presented with.  Whether it is the simple act of kneeling outside of the new NFL rules, players will have support of many of us who have played in far more difficult and deadly places. Whether it is the more difficult act of boycotting games to draw attention, you will have support. Whether it is the act of joining us on the National Mall to protest the actions of America’s first, and only, dictator, you will have the support of many troops.

I signed up to protect this nation from forces both foreign and domestic. I spent many years doing my best to prevent threats from an enemy outside our borders. I will willingly spend my next years preventing a threat that has now grown inside our borders. I (we) need all the help we can get. May those players we cheer week after week join the cause. We have your six.

Josh Manning is a former U.S. Army Intelligence Analyst, combat veteran, and spent several years as a counterterrorism analyst at the Defense Intelligence Agency. He currently lives in Montana and works as a civil rights investigator for the state. He also serves on the leadership team of Common Defense, a group of progressive veterans joining together to affect political change. You can follow him on Twitter @joshuamanning23