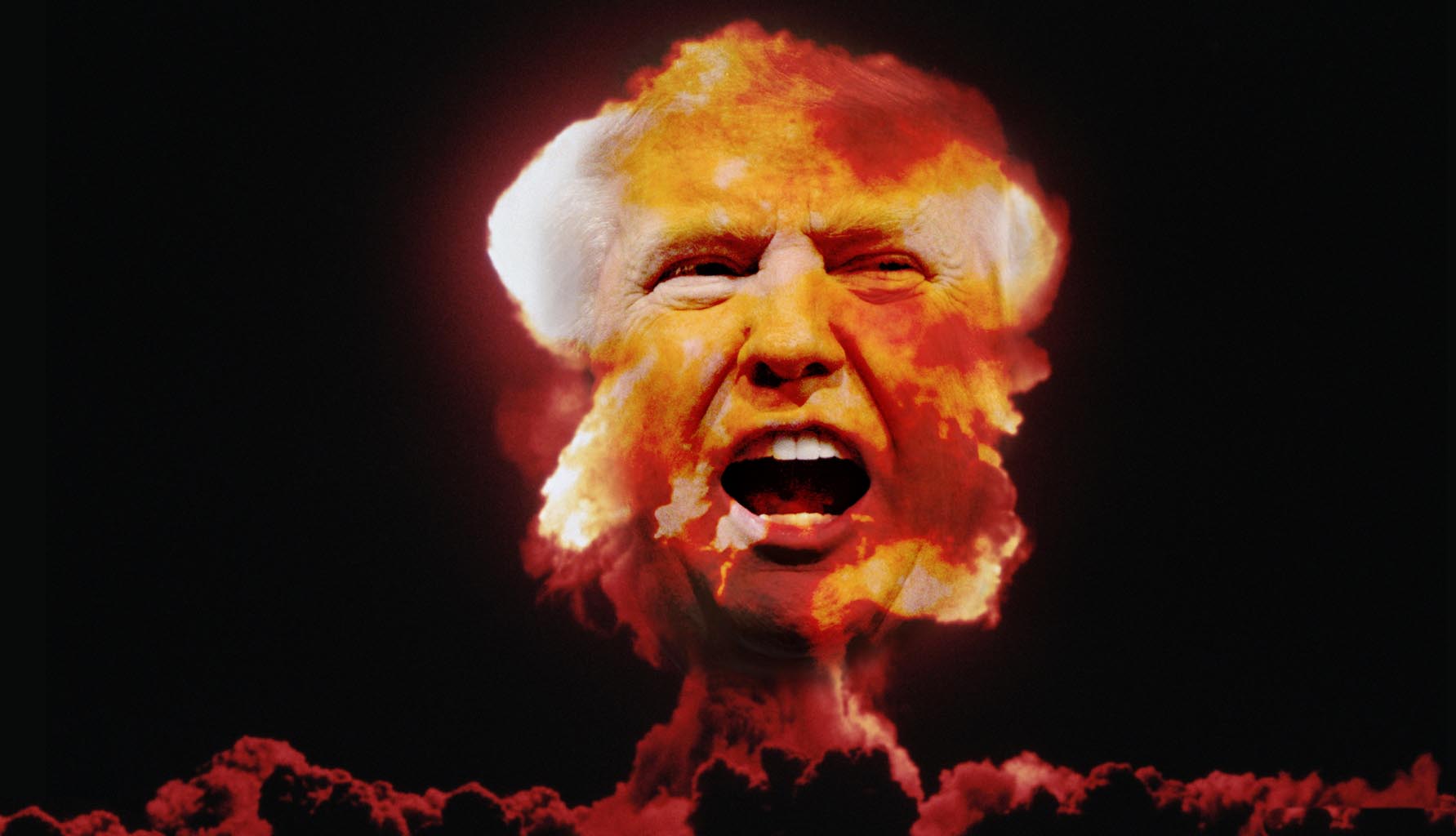 Donald Trump neither is fit to be president, nor qualified to issue an order for a nuclear first strike. His inability to seek counsel, weigh consequences, or consider the well-being of 325 million Americans not only handicap Trump's capacities for office, but also dynamically endanger the health and safety of every American - civilian and military alike.

On Tuesday afternoon, Trump spontaneously converted his Bedminster, N.J. golf club into an instantaneous war room for the growing conflict with North Korea. Seated next to Melania, instead of his generals, Trump responded to a reporter's question with his usual hyperbolic rhetoric and an added dose of unrestrained bravado. One could surmise that Trump was showing off for Mrs. Trump, but his intimation of a first strike against North Korea none-the-less demonstrates why threats of war should not be made in the presence of spouses - or in Trump's case, any supermodel, young bride, or female White House intern.

Just days after Secretary of State Rex Tillerson expressed a move toward positive groundwork for diplomatic negotiations with North Korea, Trump once again blindsided his staff and advisors. Additionally, by threatening Kim Jong-Un - Trump's equal among the planet's madmen - Trump has severely limited his own options in responding to the North Korean regime. He is drawing lines in the sand that he cannot legitimately enforce and placing the country and America's Pacific allies at risk.

As the crisis escalated Tuesday night, pundits across the nation unleashed a barrage of criticism on Trump and his impulsive approach nuclear war and global diplomacy. If what Trump has sought in his political aspirations is fame, then he has achieved the rare status of being twin to the most despised, irrational, and falsely adored dictator on the planet. As the two adolescent minded tyrants square off, the rest of the world is watching closely without an iota of admiration or respect for either leader.

Earlier on Tuesday, in the hours after The Washington Post broke the news of North Korea's miniaturization of nuclear warheads for a ballistic missile, Trump was too busy tweeting about...the illegitimacy of The Post. It seems obvious that Trump either had not been briefed on the North Korea situation, or if he did, had ignored any expert counselling. His irrational tweets also suggest Trump is suffering a severe disconnect with reality. He condemns The Post in one instance and then reacts to its reporting in another as justification for initiating nuclear war.

As discussions intensified on Tuesday night, some political commentators introduced a legal theory not widely explored since the Reagan-era trials of Oliver North and John Poindexter: the affirmative duty of military personnel to disobey unlawful orders. Their Tuesday night arguments started the debate on whether Trump attempted a first strike to satiate his own ego, if U.S. military leaders - the generals who are supposed to be advising him - would have the sense and courage to prevent a global catastrophe by questioning any cause for illegality.

Article 92 of the Uniform Code of Military Justice governs, generally, issues of following direct orders. As emphasized by Sen. Daniel Inouye (D-Hawaii) in the 1987 Iran-Contra hearings, "Members of the military have an obligation to disobey unlawful orders." Whether an order is unlawful becomes a question of law and fact in a military court. In the abrupt turmoil that Trump caused on Tuesday, analysts talking about unlawful orders covertly urged today's military leaders to "read up on" Article 92.

Across cable news outlets Tuesday night, the opinions of both hosts and analysts waxed strongly against Trump and his mental capacity and temperament for handling the immediate crisis. Additionally, poll numbers released Tuesday suggest that less than a quarter of Americans trust the information coming from the Trump White House and a similar number believe he is qualified to address the North Korean conflict.

Plowshares Fund President Joe Cirincione had perhaps the strongest words for Trump on Tuesday night. The head of a public grantmaking foundation dedicated to preventing nuclear proliferation, Cirincione placed Donald Trump and Kim Jong-Un on the same hotheaded level of diminished capacity. Others - including a wide-range of Republicans - cited Trump's "incoherent world view" and called his remarks "amateurish." Sen. John McCain (R-Ariz.) summed up Trump's comments and mental state by saying, "I don't know what he's saying and I've long ago given up trying to interpret what he says."

Whether it is Trump's temper, his ignorance, or his refusal to seek advice from those in the know, he does not understand that the presidency is not the one-man show he is accustomed to running. The American presidency is a collaborative effort. In a country of millions, with 50 states, and global reach, it is an impossibility that one person can be responsible for each and every decision. The Oval Office is not a Trump Tower boardroom where Trump can dictate policy without consequence.

Photo via Department of Energy/GettyImages (Fair Use) Gage Skidmore/Flickr (CC BY SA 2.0) | Remix by Jason Reed