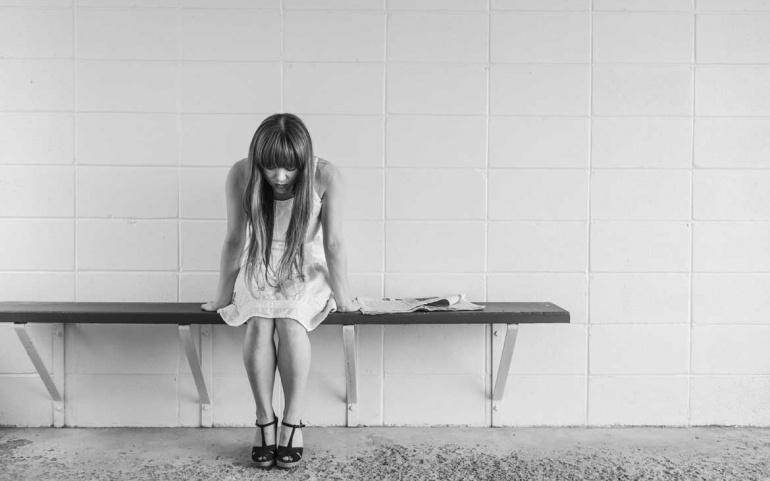 Talk of sexual harassment is everywhere these days. It starts with Harvey Weinstein and leads to Roger Ailes, Bill Cosby, Bill O’Reilly, Al Franken, Roy Moore and to former and current U.S. presidents, including the now 93-year-old George Bush. It’s a boxcar effect. Truthfully, every day I worked on this piece for publication, another high-profile offender slid into the spotlight. And tomorrow—no matter what day you read this—there will be another.

Most of the talk centers on workplace harassment, but it’s not like all of a sudden we women walk into the workplace and are hit with sexual harassment for the first time. We’ve been dealing with weird and unwanted sexual behavior from men since we were 7, 8, 9, 10, 11 years old.

I asked my circle of friends one simple question: How old were you the first time you were flashed? The answers? Downtown at age 12. Nine years old at the soccer fields in the park. Ten years old on a street car. Eight years old outside my neighbor’s house. Whether girls grow up rich, middle or poor; in urban, suburban or rural settings, sexual harassment begins everywhere very early in a woman’s life.

My dad said, “Well, that’s the first I ever heard of this. Why didn’t you tell us?”

Even at that young age, I knew I’d be the one who would suffer if I reported.

Which is why women of all ages don’t report. Reporting ends up costing them their autonomy or reputation or both. So, for the most part we just deal with sexual harassment. We come up with strategies. Some of them not so well conceived because we hatched them with our ten-year-old buddies, but they’re really all we have, because no one taught us differently.

So the question is not “Why don’t girls and women speak up when they’re sexually harassed?” The question is “Why is our society grooming young girls to accept grotesque and frightening behavior from men as simply part of becoming a woman?”

What does society get out of that? The answer: Women who accept grotesque and frightening behavior from men.

Grotesque and frightening behavior from men scares women and is an attempt to keep them from taking their place in society. It ensures the stratification of society for the benefit of those at the top.

Two themes have stood out for me in the wake of the recent, sexual-harassment outings: 1) Women weren’t exactly silent. They were quiet. To protect each other, women would warn each other about the treachery of being alone with men such as Harvey Weinstein and Roy Moore and 2) Women cannot change this pernicious behavior alone. Men need to help us in this struggle.

Women do have power in this society. Not on a macro level, but within their personal relationships. Women’s power comes from talking and connecting. It’s why sewing and knitting circles began. Groups of women sharing the scuttlebutt is their power—it’s their way of sharing information that is “useful for navigating the social world.”1

Women are hugely influential on their sons, husbands, brothers, male business colleagues and close male friends. Women must speak to the good men in their lives, and these good men—who, too, are outraged by gendered violence and harassment—must risk their autonomy and their reputations to reverse this illegitimate social contract. Good men must speak man-to-man to other men and call them out on their behavior.

Sometimes only a man can speak to another man and have an impact. I learned this in a very separate, unrelated way. At a certain point in my son’s sports career, coaches just did not want to hear from mothers anymore. When boys get to be about 12, men (fathers) must be the ones to bring complaints to coaches. Male coaches give more weight to fathers than to mothers. They like moms to get involved to plan parties and bring snacks, but they do not want to hear our theories on base running or the use of bubble screens; our feedback on how practices are being run; or our peppered questions about the week’s schedule. I have just accepted this—to the point that I have used my husband’s email account, making it look like my message is coming from him, to get a coach to pay attention to my concerns. And it works! Sometimes, a man needs to approach another man to get behavior changed.

To start any new relationship, to start any new beginning, someone always needs to take a step forward. Women need quietly to talk, not just with the women in their lives, but with the good men in their lives about the harassment and violence they face as women. And men, for their part, need to be brave enough to take on the power establishment on behalf of women. Cuz they’re scared, too. They’re likely not part of the controlling cadre of men who run this society.

We can’t expect children to drive this change. But we as adults, in our own intimate worlds, amongst our dearest relationships, can take risks to change the conditioning that all of us have received that allows us to walk around every day accepting crass inequality that should outrage us.

Tia Creighton is a fourth-generation San Francisco Bay Area native. She received a bachelor’s in English from UCLA. Her work has appeared in Redbook, San Jose Mercury News and Tenderloin magazine. She is a contributing editor for The Stoneslide Corrective and lives in Silicon Valley.