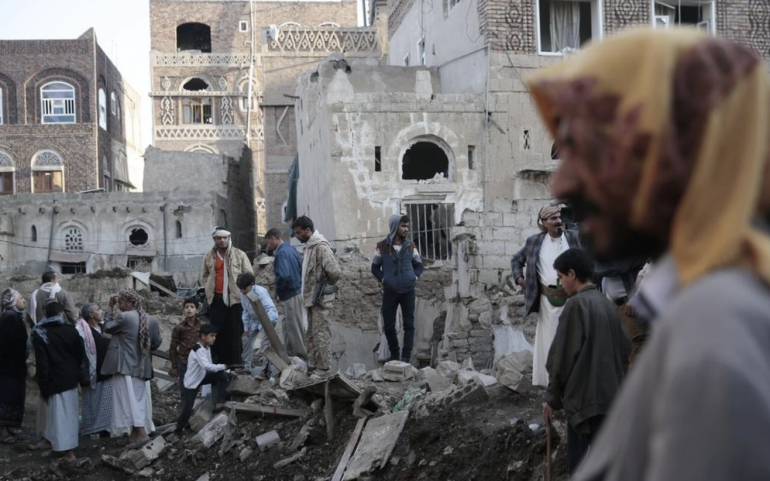 There are two things you should never let your children see being made: sausage and policy. The House & Senate War Powers Resolutions were complicated to begin with, so most journalists and politicians aren’t able to explain half of it.

For the wonkiest of wonks, here is some information about the two separate Resolutions invoking the War Powers Act to end U.S. support for the now widely reported Saudi-led war.

What’s driving this nearly four-year-old war to finally be debated, to the actually get votes, is the horrific human toll it’s taking. The United Nations is calling the war in Yemen the worst humanitarian crisis in recent history. New estimates show more than 60,000 people have been killed in the Yemen war in past two years, according to the UK-based independent research group Armed Conflict Location & Event Data Project (ACLED).

Sen. Bernie Sanders has been repeating over and over that 85,000 children have died of starvation. According to Reuters, “Some 1.8 million Yemeni children are malnourished, making them more vulnerable to disease,” and the U.N. Children’s Fund (UNICEF) estimates that 400,000 lives are at risk from severe acute malnutrition.”

The War Powers Act (also known as the War Powers Resolution) was passed 45 years ago to reassert Congressional authority to go to war as per Article 1, Section 8 of the U.S. Constitution that states “Congress alone has the authority to determine whether the United States shall use offensive military force.” In 1973, it passed, overriding a veto by President Nixon. That veto giving us some insight into the growing Imperialistic nature of the U.S. Presidency that we saw with George W. Bush in the Afghan and Iraq Wars.

The U.S. Congress hasn’t adhered to the Constitution’s requirement since 1942. Truman ignored it, taking the U.S. into war with North Korea. Similarly, Congress never declared war in Vietnam. President Johnson used the Tonkin Resolutions to use military force. Each President, from Johnson to Trump, has worked most often with Authorization of the Use of Military Force commonly known as AUMFs.

What’s so unique and powerful about the War Powers Act is that it’s one of the few authorities given to any individual member of Congress through what’s called “privilege status.” This means it can be invoked, heard and voted on as long as the Bill is approved by the Parliamentarian, followed by a 15-day waiting period. It doesn’t have to go through a Committee to go straight to the floor for a vote. The Foreign Affairs committee could even mark it up and vote on it in three days.

First let’s clarify that we are at war against the Houthis, who overthrew the Saudi-friendly leader, Hadi, on March 23, 2015. We had to appease Saudi Arabia over the Iran Deal. The U.S. has been giving military aid, refueling jets and providing logistical support. In March of 2016 the New York Times published a piece titled “Quiet Support for Saudis Entangles U.S. in Yemen,” highlighting that “the Obama administration needed to placate the Saudis to complete the nuclear deal with Iran,” by offering support for the war through arm sales and military assistance.

This war with Yemen has never been authorized by Congress.

Why are we supporting the Saudis in a war against Yemen?

1.) To control the trade routes of the Bab-el-Mandeb Strait and the port of Hudayhad in Yemen.

2) To sell weapons to the Saudis with a couple hundred billion dollars under Obama and Trump.

3) As a potential military strategy to a lead up to war with Iran.

6) Because politicians get money from military contractors and Saudi lobbyists to support war.

7) To maintain U.S. Military presence in the Middle East.

The Bill, heavily debated this past month in the Senate, was sponsored by Senators Sanders, Murphy and Lee, and attempted the first time on March 18, 2018 that got tabled then. The Senate’s version is a Joint Resolution number 54 (referred to SJRes54) and passed the Senate 56-41 on December 13, 2018. The type of Bill was a 'Joint Resolution' which means that that has the power to be heard in both the House and Senate and sent to the President and turned into law.

Previously, Rep. Ro Khanna tried to pass companion legislation in the House with a Concurrent Resolution (HConRes138) that addresses the sentiments of both Chambers but is not submitted into law.

Unfortunately, House Republican leadership stripped it of its ‘privilege’ status, which grants precedence over ordinary business and does not require debate. On November 14, 2018, Congresspersons Massie R, Gabbard D Jones R and Pocan D sent out a bi-partisan letter saying, “Despite our efforts, the Rules committee has inserted language into the rule of H.R. 6784 that would “de-privilege” our resolution and deny us a vote.” This Rule was attached to the Wolves Act.

Last Tuesday night the Rules Committee approved this rule by a vote of 206 – 203, stopping any hope of passage of a Yemen war powers resolution in the House by the end of the year.

After the Senate passage of SJ Res 54, the legislation now goes to the House this week. Speaker Ryan could still bring it up for a vote, but he is expected to block it, just as he has repeatedly blocked war and peace legislation throughout the last year. That means S.J. Res. 54 will die by the end of the year, and in order to pass both chambers of Congress and be enacted into law, the legislation will have to be reintroduced next year, and voted on in the House and the Senate.

Representative Ro Khanna’s Yemen war powers legislation has repeatedly been blocked by the House leadership, and for this legislation to be enacted, we need to pass it in both houses of Congress. We have the votes in the House and Senate but we have to put pressure on the House Democratic Leadership to allow a vote on the floor in early January. One Senator can force a vote, but in the House, leadership can stop these votes.

It’s almost impossible to find journalists or members of Congress who would have known how hard it is to make anything like this happen, and to keep pressure on the President and Defense Department for passage of a Bill to save thousands of lives every month in Yemen.

To those who worried the Resolution had “loopholes” because the 2001 Authorization for the Use of Military Force still allowed for the U.S. to go after Al Qaeda in Yemen, here are a couple of points to consider:

It’s called a carve-out, not a ‘loophole’ and carve-outs simply mean that when it comes to ending US military involvement in Yemen, the drone wars are simply not covered by this legislation. It doesn’t authorize any U.S. military activity in Yemen, it simply limits it.

I find this to be an important take away. If you remember, Bernie and Ro Khanna not long ago introduced bills to force companies with employees that were on Social Services (like Food Stamps) to pay more in taxes to cover the Government for subsidizing Amazon’s employees and other companies. The politicians knew they wouldn’t get the votes needed but the threat of the bills got Amazon and other corporations to increase their wages to employees. It was called the Bad Employers by Zeroing Out Subsidies (Stop BEZOs) Act. This is a great example of how pressure in the face of challenges can be effective to bring solutions to terrible and complicated problems.

Both Bills are expected to come back in January with the new 116th Congress, requiring a new set of votes with the new members, different titles, numbers and another set of compromises and problems, but for now many Yemenis’ and Humanitarian Organizations are very optimistic by the results and believe that this has put immense pressure on the success of the Peace Talks and will mitigate future aggressions.

Arn Menconi is a former Colorado County Commissioner, who has run for both U.S. Senate and Congress in Colorado. He is a peace activist and foreign policy analyst. Follow him on Twitter @arnmenconi