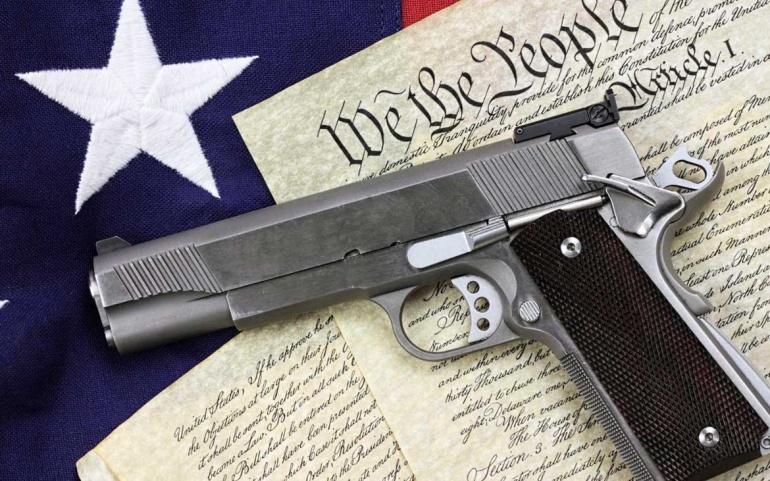 Washington, D.C., June 26, 2018 - On June 26, 2008, the Supreme Court issued a landmark decision in District of Columbia v. Heller, finding for the first time that the Second Amendment gives law-abiding, responsible citizens the right to have a gun in the home for self-protection. While leaders in the gun lobby boasted that the decision would lead to the dismantling of gun safety regulations throughout the country, an examination of the legal landscape in a post-Heller world shows a far different reality.

A new report published today by the Brady Center to Prevent Gun Violence takes a close look at the Heller decision and how courts have addressed gun issues in the ten years since. “10 Years Later: The Second Amendment and Public Safety After Heller” surveys how the Supreme Court interpreted the Second Amendment and what that’s meant for subsequent legal challenges.

“One thing that the Supreme Court made absolutely clear, despite what the NRA likes to say, is that clear and reasonable restrictions on who can own and carry guns is entirely consistent with the Second Amendment,” stated Brady Center co-president Avery Gardiner. “Heller is the law of the land. And as court after court has ruled, that means that there are limits on what gun ownership can and should mean.”

In the ten years since Heller, more than 1,200 legal challenges have been heard by state and federal courts. And in more than 90% of those cases, the courts have rejected the Second Amendment challenge and ruled that the Heller decision can and does coexist with common-sense gun laws. Courts have consistently ruled over the past decade in favor of assault weapon bans, concealed and public carry restrictions, prohibited purchasers and background checks, and other gun safety regulations.

“The Constitution has always protected a right to live that properly limits the Second Amendment and places public safety first,” stated Jonathan Lowy, Brady’s VP of Litigation. “The gun lobby likes to say that the right to bear arms is ‘America’s 1st Freedom,’ but it’s actually the right to live, and courts must and do consider that whenever considering whether to uphold gun laws facing Second Amendment challenges. Sensible gun laws have continued to hold fast post-Heller, and we will continue our efforts to defend Americans’ true first freedom - to be safe from threats to their safety.”

In addition to looking back on the past ten years, the report speculates on what the coming decade might hold. While the Supreme Court has declined to take on substantive Second Amendment challenges, there is a real possibility that a court reshaped by President Trump’s appointees could extend the reach of Heller.

“There’s no question that the Supreme Court plays a critical role in interpreting our Constitution,” added Brady Center co-president Kris Brown. “A court stacked with justices by a president in league with the NRA would undoubtedly be more hostile to gun safety, and it makes Brady’s work to defend common-sense gun laws that much more important in the years to come.”

The Brady Center to Prevent Gun Violence is dedicated to reducing gun injuries and deaths in America by stemming all of the causes of gun violence. Through its legal work, the Brady Center works in the courts to reform dangerous and reckless gun industry practices that give criminals and dangerous individuals access to guns. Brady’s legal team has won rulings in courts across the country holding that gun companies can be held accountable for shootings that result from their negligence, including in the Supreme Courts of Kansas, Indiana, and Alaska, and lower courts in New York, Pennsylvania, Utah, West Virginia, Washington, and Wisconsin.

The report and other materials on the Brady Center’s legal work can be found at www.bradycenter.org.