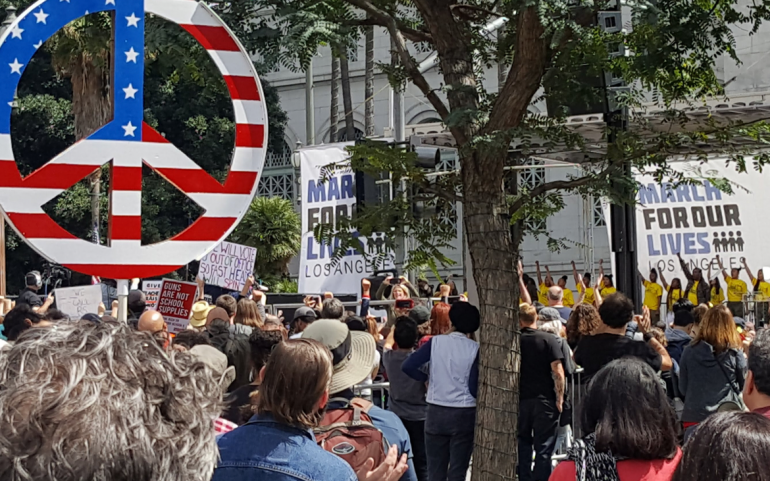 A few years ago in the month of March, my partner got me an all day package at LAX Firing Range in Southern California as a birthday present. She figured as a former pro athlete who did archery & rifles at youth summer camps, that it would be a welcome surprise, and it was. Shooting with her that day, and learning even more about firearms & gun safety was an amazing experience.

A few days ago in the month of March, I found myself in downtown Los Angeles at 'March For Our Lives', honoring those who've been impacted by gun violence (including 17 Floridians), and advocating for a new type of gun safety, empathic gun safety! 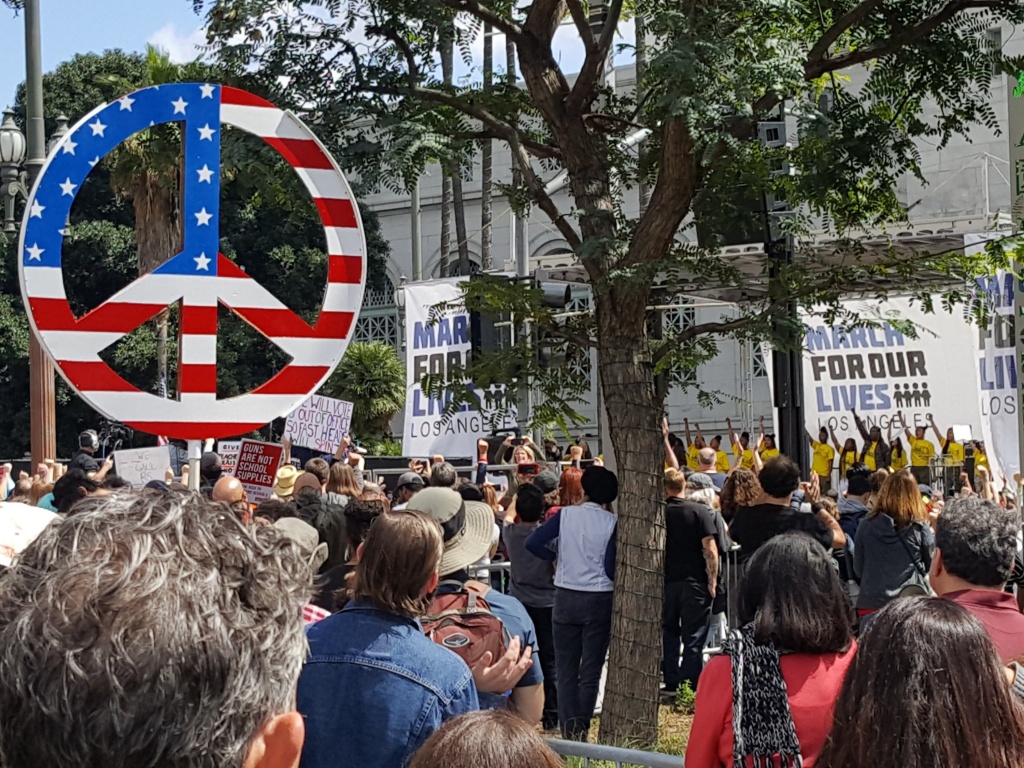 Empathy (which is a Gift, a Language, an Action & a motivation...GLAM if you will) is any version of understanding the emotion & motivation of another person (along with ourselves). It's been said that 'human behavior is complex, but human motivation is not. We seek the common needs and nothing else'

What are some of these common needs? Respect? Freedom? Dignity? Equality? I believe we all want these things, and other common needs as well. Where we differ, where we get thrown off track of our mutual motivation (the WHY we do what we do), is in the 'ant tunnels' (the HOW we get to where we do)

When I saw Alyssa Milano with her husband and two children at the march in LA, I guessed that some of her motivations (the common needs) were the same as any mama bear around the world: Love, Safety, Dignity, Protection & Expansion. 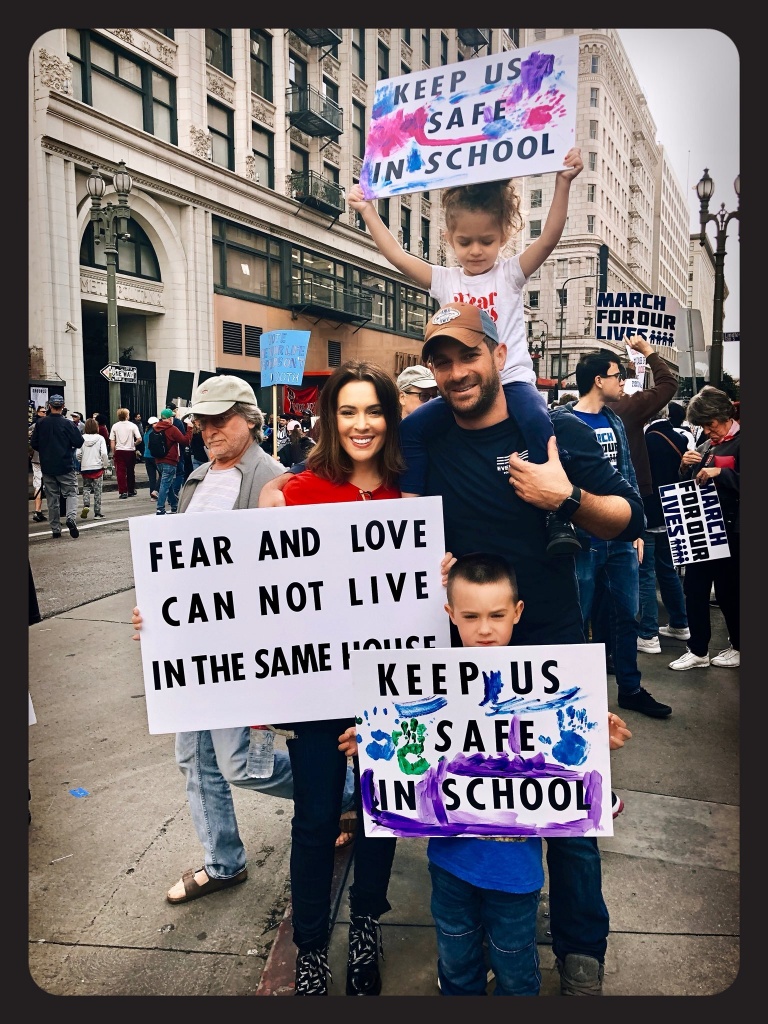 When I heard Emma González speak (& not speak) at the march in DC, I guessed that some of her emotions were the same as any human around the world who has experienced direct or indirect trauma: pain, sadness, grief & frustration.

If debates are win/lose & conversations have the potential for win/win, I believe we've been missing a great conversation about a constitutional cornerstone (The 2A):

"A well regulated Militia, being necessary to the security of a free State, the right of the people to keep and bear Arms, shall not be infringed" (1789/1992)

Empathy looks at objective observation, so what is the objective observation here? The 1st thing that jumps out for me is the phrase 'keep & bear Arms'. If 'arms' in latin refers to weapons, and 'bear' refers to carrying something, isn't the objective observation 'keep & carry weapons'? Firearms & ownership seem to be a subjective overlay, don't they? What's your observation? If we unpack what it is that 'shall not be infringed' it appears that what shall not be infringed is THE 'right' in relation to THE 'weapon' (or the 'arms'). So does that mean Americans can choose to 'keep & carry weapons' (but not which weapons they can carry & keep)? (unless they're in jail, or on a plane, or at the WH, or...wait. That 2A right is infringed upon everyday, in multiple ways. I can see why folks are frustrated. Btw, it's just ONE right, right?)

...and before I forget, wasn't it something that an African-American spokesperson was the one coming down on 'the kids'? As an American of African-Ancestry myself (whose shade of brown is not as light as some of my Caucasian friends), it messed with my whole implicit bias and group-privilege mojo!

Back to The 2A. With those multiple commas is it possible that 'a well regulated militia' is what 'shall not be infringed'? What is 'necessary'? Who are the 'people' that have this 'right'? Are they the one's in the 'well regulated militia'? And again, what is it that 'shall not be infringed'? It's like a chunk from the middle after the words "free state" is absent, and we've been debating (vs empathically conversing) ever since! I tip my hat to you if this is crystal clear. Given context and semantics, to me it seems anything but.

So Empathic Gun Safety does these three things, and also introduces transformational vocabulary to the conversation (where we take as much judgment out of the communication as possible). We talked about mutual motivation above. One of our strongest motivations as human beings is AUTONOMY (doing things because we choose to, not because we believe we are being forced). Words release bio-chemicals into our system, so when we hear the term 'gun control,' biologically & empathically we resist (can you feel the difference between that term & 'gun safety'?). So as you go out into the world after digesting this, think of our mutual motivations (the common needs) and think of any term that doesn't align with what you want. As Coach Wooden taught us at Ucla, thank whatever has gotten you to where you are, upload the new empowering alternative, and delete the previous version!

Known as #TheEmpathyGuy Tony Scruggs is a nonviolent-empathy coach (& Sag/Aftra member) who speaks on empathy & compassion at home, in the classroom, in society & in the workplace! Tony is an author ('Excellence Off The Field' testimonialized by the late Garry Marshall, along with Mr Danza, including Dave Roberts), a nonbullying consultant & a former professional athlete (who now hits homeruns for the Tony Danza softball team). You can find Tony on Twitter @Ucla444 (UnConditional Love & Acceptance, with the number of the angels)
"Together We Rise, Together We Fly" ~The Empathy Guy
Tags: empathy, gun safety, lax, march, march for our lives