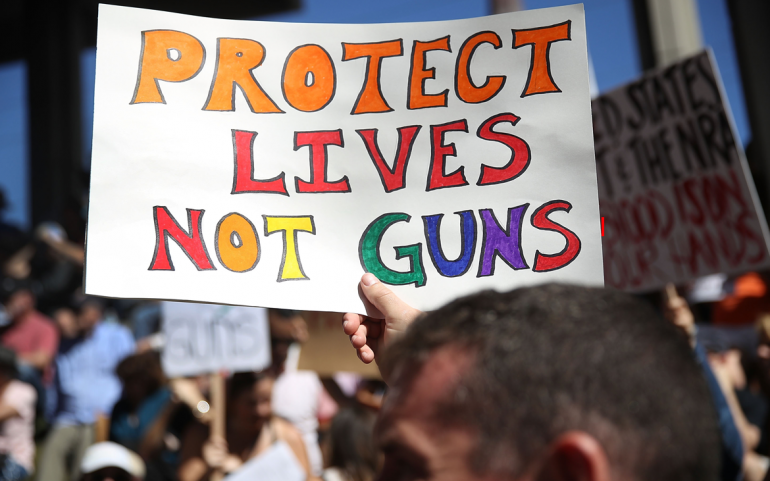 Following a Nearly 24-Hour Standoff That Began When Officers Responded to a Domestic Violence Call, Gunman Killed Four Children Before Taking His Own Life

ORLANDO, Fla. – The Florida chapter of Moms Demand Action for Gun Sense in America, part of Everytown for Gun Safety, today responded to reports that four children were shot and killed in Orlando. On Sunday evening, police received a domestic violence call and attempted to arrest the alleged gunman when a shootout began, injuring Officer Kevin Valencia. At some point during the nearly 24-hour standoff that followed, the alleged gunman killed the four children – aged 1, 6, 10 and 11 – before killing himself. Reports indicate that two of the children were his and two were the children of the domestic violence victim.

The majority of mass shootings between 2009 and 2016 – 54 percent – were related to domestic or family violence. Additionally, gun violence has a devastating impact on children. Every day, an average of 47 children and teens are shot in America, killing over 2,700 a year and injuring nearly 14,500 more. Sadly, gun-related deaths are now the third leading cause of death for American children.

STATEMENT FROM GAY VALIMONT, VOLUNTEER LEADER WITH THE FLORIDA CHAPTER OF MOMS DEMAND ACTION FOR GUN SENSE IN AMERICA:

“I am utterly heartbroken to wake up to news of yet another tragic act of gun violence in our state. This time, four children were killed and a police officer was critically wounded. As a mother, my heart aches for the victims and their families. We can and must do more to prevent these senseless acts of gun violence from devastating our communities. It’s time for each of us to stand up and demand the policy changes that are necessary to save lives and allow our children to grow up safely.”

About Everytown for Gun Safety

Everytown is the largest gun violence prevention organization in the country with nearly 5 million supporters and more than 250,000 donors including moms, mayors, survivors and everyday Americans who are fighting for public safety measures that respect the Second Amendment and help save lives. At the core of Everytown are Mayors Against Illegal Guns, Moms Demand Action for Gun Sense in America and the Everytown Survivor Network. Learn more at www.everytown.org and follow us @Everytown

About Moms Demand Action for Gun Sense in America

Moms Demand Action for Gun Sense in America is a grassroots movement of Americans fighting for public safety measures that respect the Second Amendment and protect people from gun violence. Moms Demand Action campaigns for new and stronger solutions to lax gun laws and loopholes that jeopardize the safety of our children and families. Since its inception after the tragedy at Sandy Hook School, Moms Demand Action has established a chapter in every state of the country and, along with Mayors Against Illegal Guns and the Everytown Survivor Network, it is part of Everytown for Gun Safety, the largest gun violence prevention organization in the country with nearly 5 million supporters and more than 250,000 donors. For more information or to get involved visit www.momsdemandaction.org. Follow us on Facebook at www.facebook.com/MomsDemandAction or on Twitter at @MomsDemand