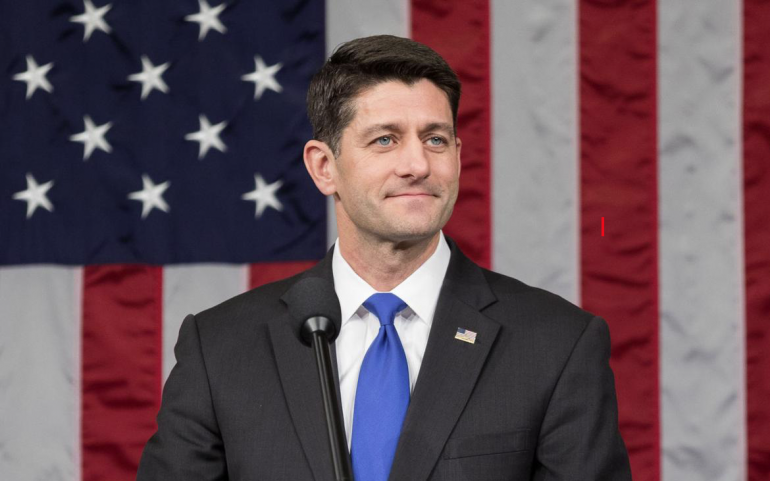 “On Friday, a gunman used his father’s shotgun and a .38 revolver to kill 10 students and educators and injure others in Santa Fe High School in Texas. We send our love to the Santa Fe community and we encourage Santa Fe community leaders to reach out to us to access our resource folder created to support communities that have experienced similar mass shooting tragedies.

We have warned all Americans that if a mass shooting can occur in Newtown, Connecticut, then it can happen anywhere in the United States. The gun lobby influence on Congress is killing our children in our schools, on our streets and everywhere in America. We demand that House Speaker Paul Ryan reject all money from the gun lobby and immediately call a vote on the 56 gun control measures outlined below. There is absolutely no justification for not passing these common sense policies.

Speaker Ryan sent his thoughts and prayers to the Parkland community after 17 students and educators were brutally murdered by a 19-year-old gunman with a Smith & Wesson M&P15 assault rifle on Valentine’s Day, but he ignored our call for him to allow a vote on the 56 House Task Force Member gun safety bills. Consequently, the number of gun deaths and injuries continues to rise.

According to the Center for Responsive Politics, a nonpartisan think tank that tracks money in politics, 232 of the 435 members of the House of Representatives received money from the gun lobby in 2016.

It’s clear why Speaker Ryan refuses to allow a vote on the following gun control measures. He was the recipient of the highest contributions from the gun lobby groups in 2016.

It’s time for Speaker Ryan, Senate Majority Leader Mitch McConnell, all members of Congress and Donald Trump to make the #NoNRAMoney pledge and begin to pass these sensible gun laws to protect our children, families and our communities across the nation or prepare to lose their jobs on Election Day.”

H.R.3947
Title: Automatic Gunfire Prevention Act
Cosponsors: 175
Summary: To prohibit the possession or transfer of certain firearm accessories, and for other purposes.

Rep. Adam B. Schiff (CA-28)
H.R.3984
Title: Equal Access to Justice for Victims of Gun Violence Act
Cosponsors: 33
Summary: To repeal the Protection of Lawful Commerce in Arms Act, and provide for the discoverability and admissibility of gun trace information in civil proceedings.

Rep. Salud Carbajal (CA-24)
H.R.2598
Title: Gun Violence Restraining Order Act of 2017
Cosponsors: 60
Summary: To provide family members of an individual who they fear is a danger to himself, herself, or others new tools to prevent gun violence.

Rep. Mike Thompson (CA-05)
H.Res.367
Title: Establishing the Select Committee on Gun Violence Prevention.
Cosponsors: 163
Summary: Establishes the House Select Committee on Gun Violence Prevention to investigate and report on: the causes of mass shootings, methods to improve the federal firearms purchaser background check system, connections between access to firearms and dangerously mentally ill individuals, strengthening federal penalties for trafficking and straw purchasing of firearms, closing loopholes that allow some domestic abusers continued access to firearms, linkages between firearms and suicide, gun violence's effect on public health, the correlation between state gun violence prevention laws and the incidence of gun violence, the importance of having reliable and accurate information on gun violence and its toll on our nation, the implementation of effective gun violence prevention laws in accordance with the Second Amendment to the Constitution, and rates of gun violence in large metropolitan areas.

H.R. 4240
Title: Public Safety and Second Amendment Rights Protection Act of 2017
Cosponsors: 161
Summary: To protect Second Amendment rights, ensure that all individuals who should be prohibited from buying a firearm are listed in the National Instant Criminal Background Check System, and provide a responsible and consistent background check process.

Rep. David Cicilline (RI-1)
H.R. 2841
Title: Disarm Hate Act
Cosponsors: 37
Summary: To prevent a person who has been convicted of a misdemeanor hate crime, or received an enhanced sentence for a misdemeanor because of hate or bias in its commission, from obtaining a firearm.

H.R.4344
Title: End Purchase of Firearms by Dangerous Individuals Act of 2017
Cosponsors: 3
Summary: To incentivize State reporting systems that allow mental health professionals to submit information on certain individuals deemed dangerous for purposes of prohibiting firearm possession by such individuals, and for other purposes.

H.R.4343
Title: Unlawful Gun Buyer Alert Act
Cosponsors: 5
Summary: To amend the NICS Improvement Amendments Act of 2007 to provide notification to relevant law enforcement agencies in the event that a background check conducted by the National Instant Criminal Background Check System determines that a person may not receive a firearm, and for other purposes.

H.R.4342
Title: Fire Sale Loophole Closing Act
Cosponsors: 8
Summary: To amend chapter 44 of title 18, United States Code, to restrict the ability of a person whose Federal license to import, manufacture, or deal in firearms has been revoked, whose application to renew such a license has been denied, or who has received a license revocation or renewal denial notice, to transfer business inventory firearms, and for other purposes.

H.R.4573
Title: Gun Violence Research Act of 2017
Cosponsors: 27
Bipartisan: No
Summary: To clarify that the Dickey Amendment does not prevent the use of funds for research on mental health, gun violence, and how they intersect, and to provide for reporting on the effects of gun violence.

Rep. Sheila Jackson Lee (TX-18)
H.R.57
Title: Accidental Firearms Transfers Reporting Act of 2017
Cosponsors: 1
Summary: To require the Director of the Federal Bureau of Investigation to report to the Congress semiannually on the number of firearms transfers resulting from the failure to complete a background check within 3 business days, and the procedures followed after it is discovered that a firearm transfer has been made to a transferee who is ineligible to receive a firearm

H.R.62
Title: Gun Violence Reduction Resources Act of 2017
Cosponsors: 1
Summary: This bill authorizes the Department of Justice to hire 200 additional agents and investigators for the Bureau of Alcohol, Tobacco, Firearms and Explosives.

H.R.1983
Title: David’s Law
Cosponsors: 0
Summary: To enhance Federal enforcement of hate crimes, and for other purposes.The bill authorizes the Department of the Treasury and DOJ, for FY2017-FY2019, to increase the number of personnel to protect against criminal interference with federally-protected activities.

H.R. 4268
Title: Gun Safety: Not Sorry Act of 2017
Cosponsors: 21
Summary: To amend title 18, United States Code, to provide for a 7-day waiting period before a semiautomatic firearm, a silencer, armor piercing ammunition, or a large capacity ammunition magazine may be transferred.

Rep. Pete Aguilar (CA-31)
H.R.4650
Title: PROTECT Act
Cosponsors: 3
Summary: To amend the Homeland Security Act of 2002 to develop and make available guidance relating to domestic preparedness for and collective response to terrorism regarding active shooter and mass casualty incident response assistance, and for other purposes.

Rep. Tony Cardenas (CA-29)
H.Res. 370
Title: Amending the Rules of the House of Representatives to require that a standing committee (or subcommittee thereof) hearing be held whenever there is a moment of silence in the House for a tragedy involving gun violence
Cosponsors: 117

Rep. Steve Cohen (TN-9)
H.R. 630
Title: National Statistics on Deadly Force Transparency Act of 2017
Cosponsors: 26
Summary: To require the Attorney General to issue rules pertaining to the collection and compilation of data on the use of deadly force by law enforcement officers.

Rep. Keith Ellison (MN-5)
H.R. 1079
Title: Campus Gun Policy Transparency Act
Cosponsors: 4
Summary: To amend the Higher Education Act of 1965 to require institutions of higher education to disclose their concealed carry or open carry policies with respect to firearms, and for other purposes.

Rep. Elliot Engel (NY-16)
H.R.4721
Title: Armor-Piercing Bullets Act of 2017
Cosponsors: 6
Summary: To enact into law a framework for deciding whether certain projectiles are `primarily intended for sporting purposes' for purposes of determining whether the projectiles are armor piercing ammunition.

Rep. Alcee L. Hastings (FL-20)
H.R.163
Title: Gun Manufacturers Accountability Act
Cosponsors: 1
Summary: This bill amends the Protection of Lawful Commerce in Arms Act to repeal provisions that prohibit state or federal civil actions or administrative proceedings from being brought against firearm or ammunition manufacturers, sellers, importers, dealers, or trade associations for criminal or unlawful misuse of a firearm by the person bringing the action or a third party.

Rep. Henry C. “Hank” Johnson, Jr. (GA-4)
H.R. 1746
Title: Airport Security Act of 2017
Cosponsors: 9
Summary: To prohibit certain individuals from possessing a firearm in an airport, and for other purposes.

Rep. Daniel Kildee (MI-05)
H.R.3013
Help Communities Fight Violent Crime Act
Cosponsors: 0
Summary: This bill authorizes appropriations to the Bureau of Alcohol, Tobacco, Firearms and Explosives (ATF) for Violent Crime Reduction Partnerships in the most violent U.S. cities. It permits the ATF to transfer appropriated funds to another agency or instrumentality of the U.S. government for the purpose of conducting activities under such a partnership.

Rep. Alan Lowenthal (CA-47)
H.Res.90
Title: Expressing the sense of the House of Representatives that gun violence is a public health issue and Congress should enact by the end of the 115th Congress comprehensive Federal legislation that protects the Second Amendment and keeps communities safe and healthy, including expanding enforceable background checks for all commercial gun sales, improving the mental health system in the United States, and making gun trafficking and straw purchasing a Federal crime.
Cosponsors: 41

H.R. 1708
Title: Firearm Risk Protection Act of 2017
Cosponsors: 6
Summary: To prohibit the sale of a firearm to, and the purchase of a firearm by, a person who is not covered by appropriate liability insurance coverage.

H.R.2380
Title: Handgun Trigger Safety Act of 2017
Cosponsors: 7
Summary: To provide for the development and use of technology for personalized handguns, to require that all handguns manufactured or sold in, or imported into, the United States incorporate such technology, and for other purposes.

Rep. Gregory W. Meeks (NY-5)
H.R. 4786
Title: Protecting Communities from Lost or Stolen Law Enforcement Weapons Act of 2017
Cosponsors: 18
Summary: To require State and local law enforcement agencies to promptly report the loss or theft of any firearm to the National Tracing Center, and for other purposes.

Rep. Stephanie Murphy (FL-7)
H.R.1478
Title: Gun Violence Research Act
Cosponsors: 132
Summary: To repeal the provision that in practice prohibits the Department of Health and Human Services from sponsoring research on gun violence in fiscal year 2017, and for other purposes.

Title: Safer Neighborhoods Gun Buyback Act of 2017
Cosponsors: 16
Summary: To authorize the Director of the Bureau of Justice Assistance to make grants to States, units of local government, and gun dealers to conduct gun buyback programs, and for other purposes.

H.R. 4290
Title: To require the Attorney General to study whether an individual's history of domestic violence can be used to determine the likelihood of such individual committing a mass shooting.
Cosponsors: 20

H.R. 4471
Title: NICS Denial Notification Act of 2017
Cosponsors: 12
Summary: To provide for the reporting to State and local law enforcement authorities of cases in which the national instant criminal background check system indicates that a firearm has been sought to be acquired by a prohibited person, so that authorities may pursue criminal charges under State law, and to ensure that the Department of Justice reports to Congress on prosecutions secured against prohibited persons who attempt to acquire a firearm.

Rep. Jamie Raskin (MD-8)
H.Res. 666
Title: Amending the Rules of the House of Representatives to observe a 60-second moment of silence in the House for those killed by gun violence in the United States on the next legislative day after any such individual dies.
Cosponsors: 0