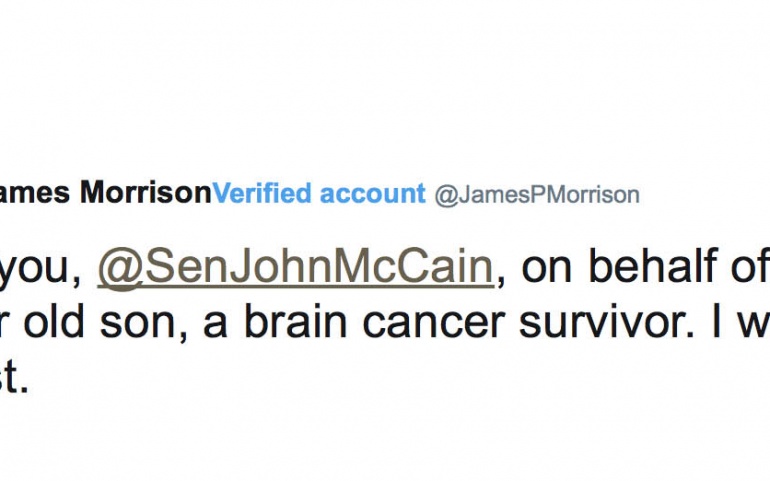 The skinny repeal went down. Trumpcare is defeated. (At least for now. Word is, Trumpcare may come back for debate. It’s like Jason in the “Friday the 13th” movies. It refuses to really be dead!) Obamacare lives. Depending on your party affiliation, you are either cheering or angry. Or maybe party affiliations don’t matter to you. Perhaps you have gone through a health crisis that has affected your view.

Obamacare. Trumpcare. Say either word on social media or in your daily life and you are guaranteed a passionate response. President Obama and President Trump both have very outspoken supporters and very outspoken detractors. But healthcare shouldn’t be an issue that divides America down strict party lines. Republicans aren’t the only ones that get heart attacks. Cancer doesn’t just choose to prey on Democrats. And yes, sick kids have both Democrat and Republican parents. Every single one of us has either gone through a major health crisis or has someone close to them who has. In my case, I don’t have to look past the mirror to see a cancer victim.

In 2012, I was diagnosed with stage 4 colon cancer. At that point, it had already spread to my liver. Radiation treatments and Chemo treatments were first. After allowing my body to recover, I had my first operation which removed my rectum. I now had a permanent colostomy. After recovering from that operation, I had a liver procedure to stop the blood flow to the cancerous part of my liver. Sometime later, I had a liver resection, in which a large portion of my liver was removed. My next scan revealed that cancer had returned to a spot on my liver and I had my third liver procedure to remove the cancer. A new round of Chemo followed. It was a bit too much for me this round and I landed in the hospital for a week, dehydrated and wheelchair bound. I recovered and finished the Chemo sessions. My next scan revealed that the cancer had spread to my lung. I had a section of my lung removed.

The cancer has not returned since.

All these hospital stays, operations, medications, radiation treatments, chemo treatments, colostomy supplies, doctor’s appointments, home visits from nurses and so much more added up to well into the 7 figures. Luckily, I had solid medical insurance. It still left me with some unpaid bills, but owing thousands was better than owing millions.

I am a lucky man. I battled Cancer during the days of Obamacare. Is Obamacare perfect? No. But at its core, it protected people like me. Without proper insurance, you would be reading another piece from another writer. I would be dead.

So, what about Trumpcare? What about that skinny repeal? Well, even if you are an avid Trump supporter, you must look closely at this disaster of a plan. And plan, may be too strong a word. There seemed to be no plan. Trump and Republicans were so determined to take Obamacare away, they put their pride ahead of what is good for the American people. Cancer patients, the elderly, the poor and yes, the average common American citizen would be in danger under Trumpcare. The skinny repeal? Looking deep within the skinny repeal reveals huge cuts to people in need. People would have died.

I started this post with a tweet from my friend James Morrison. James’ heroic son Seamus battled brain cancer and won. When I battled cancer myself, Seamus was my inspiration. I looked at his kind, determined young face and said “If that boy can do it, so can I.” Seamus is alive thanks to Obamacare. Seamus is ready to attend college and has an amazing future. Is Obamacare perfect? No. But Seamus lives. I live. James has his son. My Mom has her son. Don’t tell either one of them Obamacare is a disaster.