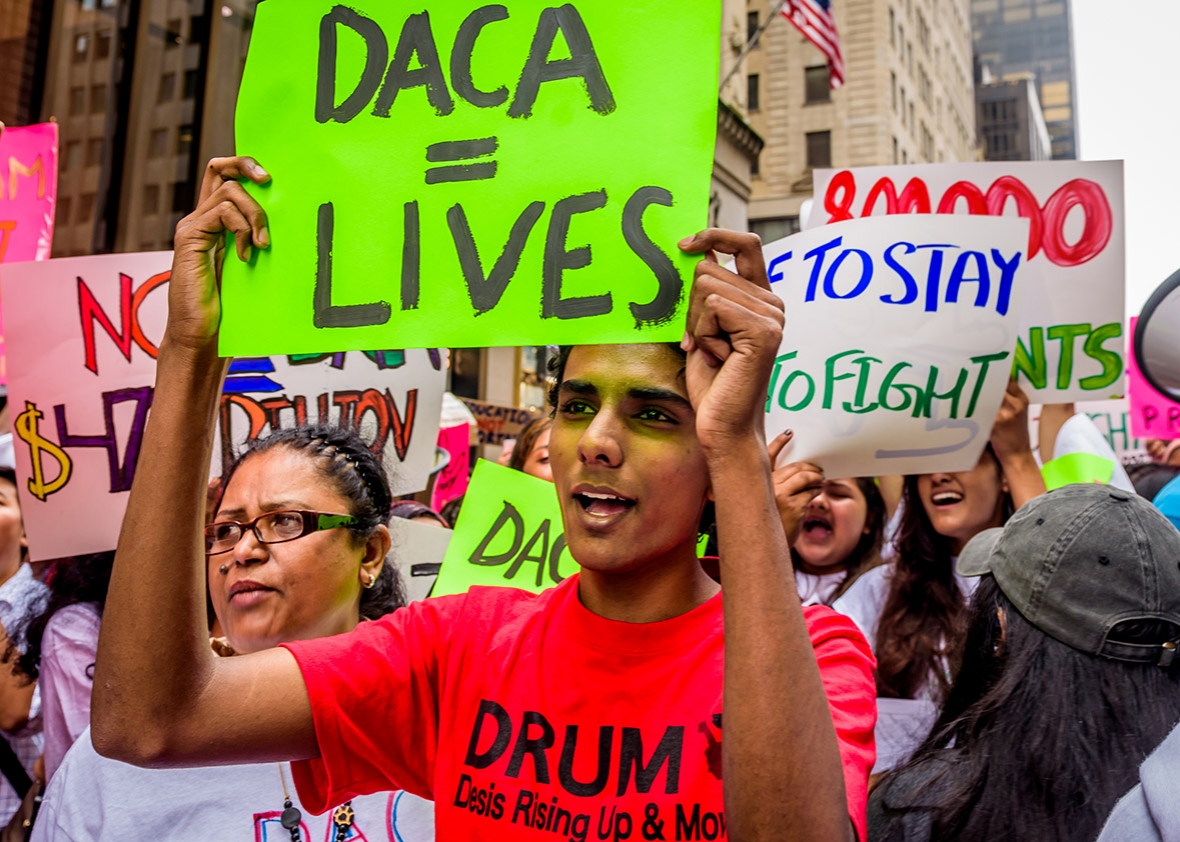 One of the oft-heard retorts in the current debate over the fate of Dreamers - immigrants brought to the United States at a young age - is "why don't they come legally?" Those who are unfamiliar with the immigration system frequently presume that Dreamers are simply lazy and never bothered to file for citizenship.

Of course, they could not be more wrong. The Deferred Action for Childhood Arrivals, or DACA program was necessary precisely because the current law prevents most Dreamers (and undocumented immigrants) from taking the steps to normalize their immigration status. It wasn't always like this, but with the relentless push toward more enforcement and less options, this is the corner we have backed ourselves into: Should we banish good people who were brought here through no fault of their own?

How, exactly, does the law prevent legalization of status? Let's take the example of a 35 year old Dreamer. His DACA is expiring in March 2018. He came to US with his parents at age 4. He has no criminal record, has never left the US, and has paid taxes. He goes to see an immigration lawyer his family has been working with for years.

First, it's important to recognize that our Dreamer is privileged, because many cannot afford counsel. Though they're maligned as "lawbreakers" and "criminals," the government doesn't provide them lawyers.

Now: Let's figure out how to help our Dreamer!

"Leave and come back legally."

Leaving the United States will trigger a 10 year bar to reentry. A waiver (forgiveness for unlawful entry and/or presence) exists, but our Dreamer doesn't qualify, because he has no parents or spouse who are US citizens or green card holders. One uncle is, but that doesn't help. Let's say he has US citizen kids. Unfortunately, to qualify for this waiver, hardship to kids doesn't count. He's out of luck.

"Afraid to go back? File for asylum!"

General fear of return is insufficient to win asylum. It must be on very particular grounds. Despite being federal, asylum law doesn't operate the same in all states. Failure to win asylum results in being placed in removal proceedings. And that's if our Dreamer had no prior contact with ICE. If he has, he likely has a deportation order hanging over him. Moreover, asylum usually must be filed within 1 year of last entry into the US. That means he would likely be barred from applying for asylum, unless he can show some extraordinary circumstance excusing his failure to file within 1 year of entry, or some new personal circumstances or conditions in his country of origin that have changed to create a new type of fear he didn't have before. Filing to reopen an old deportation order, if denied, would put him on the radar for deportation. In other words, ICE would now know where to find him to execute the order of removal.

"Just wait for the law to change."

Probably the best advice so far; "best" being relative. In the meantime, he probably can't go to school, work legally, or (in many states) even drive. The Dream Act has failed for 17 years and counting.

And set down deeper roots into a country refusing to let him stay?

Even if he did, he still needs to win a waiver and return home to reenter due to his unlawful entry at age 4. This waiver he would qualify for as the spouse of a US citizen, but it wasn't allowed to be filed inside the US until 2013. It's not guaranteed either: he still needs to show hardship to his spouse. Hardship to our Dreamer is legally irrelevant. If he has that old deportation order, he has to file to have that reopened first, and ICE's lawyers have, of late, stopped agreeing to help. Note: This means ICE refuses to help even for immigrants who are trying to follow the law. (It is not beyond notice that ICE also expects local police to help them do their job - hence the pushback against so-called "sanctuary cities.")

"What about TPS or something?"

TPS, or Temporary Protected Status, is only available to nationals of select countries. Very few Dreamers have it. The largest proportion of Dreamers are Mexican and Mexico has never been designated for TPS. (And probably never will.) But forthe few who might - usually countries like Syria or Haiti that were designated for TPS more recently, even this option is being taken away by the administration, country by country, determined to leave dedocumented as many immigrants as possible.

Bad idea. This is only serving oneself up to ICE. They're not there to help: this is not setting up a payment plan with the IRS. Our Dreamer is on his own. And he doesn't get a lawyer, either.

"Ever been a crime victim? Maybe can get a U Visa."

No, our Dreamer says (thank God). He's had the bittersweet fortune of never having been the victim of a crime. So a U visa, given to victims of certain crimes, is unavailable to him. Suddenly, he remembers, "Wait...I remember one time my work permit and valid SSN were stolen. I spent months fixing it. Does that count?

No. Not a qualifying crime. Sorry.

"Get your employer to sponsor you."

Our Dreamer is not eligible for a green card inside the US if because he has more than 6 months of unlawful presence. So although his employer could start the process, no green card application can be filed based on it. So what's the point in even starting? The only way to get a green card based on an approved petition filed by the employer is to file at the US consulate in the home country. As soon as he leaves, the 10 year bar is triggered, and there's no waiver. That means, including processing times, the employer would have to wait approximately 12 years for our Dreamer to show up to his first day of work.

By the way, the employer has to test labor market first and give job to qualified US workers first.

"I'm from El Salvador. I've saved up $120k. Can't I invest and create a business that'll hire US workers?"

No. El Salvador isn't on the treaty investor country list.

No. Honduras is on the list but (once again) unlawful presence prevents you from getting a visa. Even a single day can prevent it. There is a waiver available, but E-2 visas can be very complex and uncertain, with the waiver even more uncertain.

No such thing. There is a rumor that if one has been here for 10 years (and, in some versions, has children) then one cannot be deported.  There is no such law, and there has never been any such law.

One of the dangers lurking for Dreamers and people like them is the bad advice floating around.

"What if I serve in the military?"

There was a program called MAVNI that allowed getting citizenship for certain noncitizens with certain skills. But It expired in 2016. The current administration has failed to renew it. So, our Dreamer can't serve.

"Can't I change status to a student visa?"

No. Unlawful presence requires our Dreamer to leave. And once you do, you trigger the 10 year bar to reentry. That applies to any other temporary visa (such as tourist, exchange student, or religious worker.) Moreover, nearly all such temporary visas require one to show they intend to go back home after the status expires. That would be nearly impossible for someone who's spent nearly their entire life here.

"Good news! I found out my grandpa became a US citizen and filed for all of us back in May 2001! I'm good now, right?"

So close, but no. Unlawful presence makes it impossible to qualify for a green card even though you have an approved petition. An old law allowed these types of petitions to allow for a green card - but it sunset on April 30, 2001 and has never been renewed.

"Ok my brother was born here. He can file for me, right?"

Yes, he can file a petition, but no, it won't lead to a green card. Our Dreamer still have to leave, triggering the 10 year bar. Even if there were a way around this, sibling petitions take 13+ years to become current, while giving no right to stay in the US. (Think of it as getting a number at the DMV and waiting for it to be called). Filing a petition, then, gives ICE 13 years to find you. If our Dreamer is Mexican (as most are) the wait is 20 years.

I could go on and on. Immigration lawyers reading this will identify with a lot.

Remember: This isn't your granddaddy's immigration system. It is usually impossible to comply with. It is full of legal pitfalls. One mistake and our hapless immigrant is standing in a courtroom before an immigration judge. Unlike criminal court, people in immigration court don't get lawyers unless they can find a free one or pay one. There's no jury. No right to a speedy trial. In many cases, they are mandatorily detained - just like a criminal, but without corresponding constitutional safeguards. Once the government proves they are not American (usually right off the papers) they will be ordered removed unless they can convince the judge there is a law allowing them to stay.

So before you judge the 800,000-some Dreamers, or the rest of the 11 million plus undocumented population, or the forcibly dedocumented, or the ones currently in legal status struggling to remain so, ask yourself: "Were they given a fair chance to fix their status?"