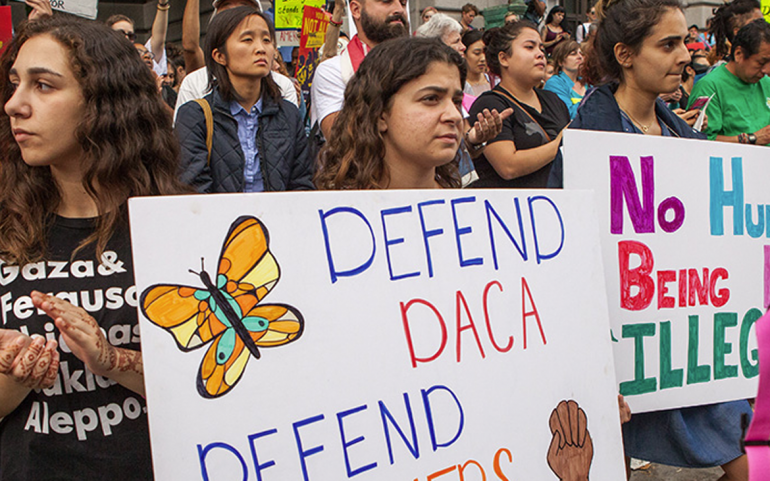 In response to a Twitter thread on the hurdles placed in the way of Dreamers and other immigrants seeking to get right with the law, I received this story from someone who didn't make the cut for DACA. Legal hurdles are no stranger to her - but as she says so eloquently, she is more than her status - HMA

I’m 22 years old I was brought to the US when I was 3. My mother married a citizen 3 years later and had my 2 brothers with him. He helped her get her residency and they required us to go back to Mexico where we stayed for 2+ years and then returned legally in 2007 with a visa. After a few years in the US we had our appointment and she received her green card. Because of a mistake by the lawyer my green card was denied, and the money we spent to get it was lost. I was 14 and I have been undocumented, unable to work & drive legally ever since.

We were advised that because I had lived in Mexico for 2 years, which we were required to do to legally live in the United States, and because I came back months after the DACA cutoff date, I was not eligible DACA.

I was in the top 10% of my high school class and had high scores on the ACT and SAT, but because of my status I couldn’t get financial aid or accepted into college. I graduated from an Early College high school in TX where in addition to the credits awarded for passing the AP tests, I took dual credit courses and accumulated more than a year of community college credit. Thankfully, it was all free. But when graduation approached and I began applying to universities where they asked for a social security number I became increasingly discouraged. I was rejected from A&M and U of H after paying full price for the applications. Senior year was a hard time for me and it was when I discovered that being undocumented would put my dreams on hold.

My story is one of millions of undocumented immigrants. And I’m sure that I’m not the only one who feels like these past 2 years have been especially stressful. Being undocumented doesn’t only prevent you from having a social security number or a driver’s license, it forces you to make the difficult decision of either doing nothing and depending on someone else or putting yourself at risk to provide for your family and drive with fear because sometimes you just have to take your kids to the doctor.

I sat in front of the TV and listened to a man who was running for President say Mexicans are criminals and rapists and I couldn’t believe it. I watched him become President and expose this country’s prejudices and ignorance. I read comments on the internet from strangers who hate me for committing the crime of passing through an imaginary line as a toddler and being raised on “their side”. People don’t understand what a psychological toll this takes. All the stories of families being broken up. Good people being deported. I live in a constant state of anxiety. But I try to stay strong because I know I’m more than my legal status.

I’m currently married to an American citizen and have gone to an immigration appointment where they told me that I needed 3 thousand dollars. I hope to apply for my residency next month. Marriage in my early twenties wasn’t my first choice but it’s the only thing keeping me from being thrown back to a country I only knew for 2 years. Of course I didn’t get married just for my residency or else I would have done it when I was 18 instead of waiting 4 years.

I’m sure you’ve read many stories like these but I’m just sharing it because, although I’m not a dreamer who’s successful and a college graduate, I deserve respect and to be treated with dignity. I didn’t know I was breaking the law, I did all I could but the system was set up against me. However, this isn’t a tragedy. I have two beautiful children who I am raising to be smart and kind. I pray the world changes for the better for them.

I'm not asking for anything. Just another story of a real person that is affected by these unjust laws. I am a human being. Not an illegal.
Thank you for your time.