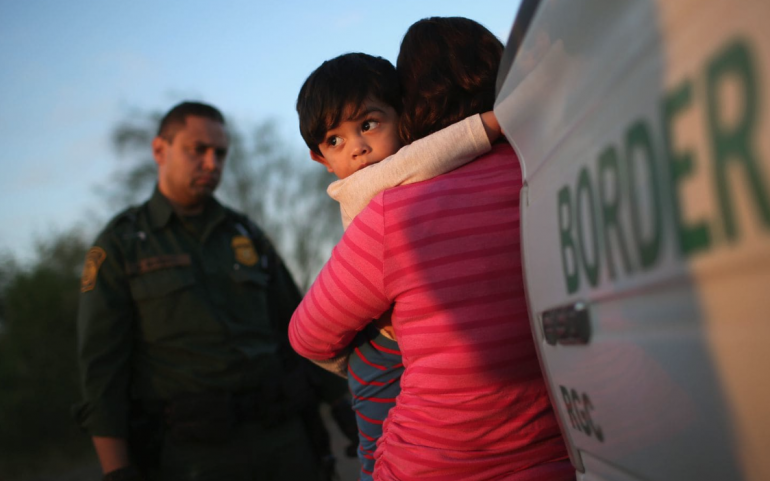 I have spent the last week debating the morality of placing children or anyone for that matter in warehouses and tent camps. I’m done appealing to the better nature of people who approve of such behavior from our government. It has mattered little to them that these are people acting in desperation. It matters little to point out that an asylum seeker has to be physically present in the United States to apply or that the law states that if they are seeking asylum it doesn’t matter how they came to be here. (Source: Immigration Services) So instead of appealing to their better nature, I now seek to show them how this could affect them and how this is a legal issue not just a moral one.

Let’s start with relations with other countries. The UN has already issued warnings about this particular issue. Trump has also begun the beginning processes to beginning a trade war. If the UN goes a step further and institutes tariffs that make normally affordable goods inaccessible to the general population, the general rule here is for one of two things to happen. Either such goods become so expensive that they become luxury items or they are rationed out. I say this because we have only to look to the wartime practices that governed shortages of that nature. Germany in World War 2 comes to mind, but the United States instituted such rationing as well even down to things such as clothing.

It is said that you are reflected in the people you surround yourself with. Given the proliferation of concentration camps ( “a camp in which people are detained or confined, usually under harsh conditions and without regard to legal norms of arrest and imprisonment that are acceptable in a constitutional democracy.” ) in both Russia and North Korea, it is chilling to note the friendliness with which our current government is treating both of these countries. If you look again to history, you see where this trend leads. It started with criminals and those deemed “asocial”. Today, the justification I see being used is that these immigrants committed an illegal act and so this behavior is warranted.

Moving on to rights,the other reasoning says that since these people are here illegally they have no rights under our laws and as such are entitled to no benefits such rights would give them. Let us set aside the morality and humanity of the issue and look at legality. First, I’ll quote a founding father that weighed in on this issue. James Madison wrote: "that as they [aliens], owe, on the one hand, a temporary obedience, they are entitled, in return, to their [constitutional] protection and advantage." Madison was the fourth president of the United States and he was very clear on this front. It seems that, though it took a while, the Supreme Court agrees with him. Zadvydas v. Davis (2001) states that "due process" of the 14th Amendment applies to all aliens in the United States whose presence maybe or is "unlawful, involuntary or transitory."

That isn’t the only case that states they are entitled to rights. Wong Win v. United States (1896) stated that “It must be concluded that all persons within the territory of the United States are entitled to the protection by those amendments [Fifth and Sixth] and that even aliens shall not be held to answer for a capital or other infamous crime, unless on presentment or indictment of a grand jury, nor deprived of life, liberty or property without due process of law.” Yick Wo v. Hopkins (1886) guarantees the rights of the fourteenth amendment to them as well as chiding officials about applying laws with an uneven hand and an evil eye.

There are numerous examples of why we should care about these people. The idea that this is even debatable is slightly nauseating on a personal front. However, that isn’t the only concern. We should worry about the direction our government is headed with these camps. During WW2 it was our Asian brethren that suffered this fate. We seen the health risks posed to them and the shame we inflicted on American citizens. The fact that we were at war was no excuse then, but we don’t even have that excuse now. First, it is the “criminal element”. With the talk of loyalty to Trump, how long before it is extended to government opposition?

We stand on the razor edge of a historical crossroads. Where we end up depends on the actions of the American citizenry. We are not 1930’s Germany. We are America, a land renowned for being a beacon of hope for the world. A land where the people dictate what is acceptable and what is not.

A nation of laws not men.

I leave you with this thought and chilling reminder of the lessons history has taught us.

Everything Hitler and the Nazis did in Germany was legal.