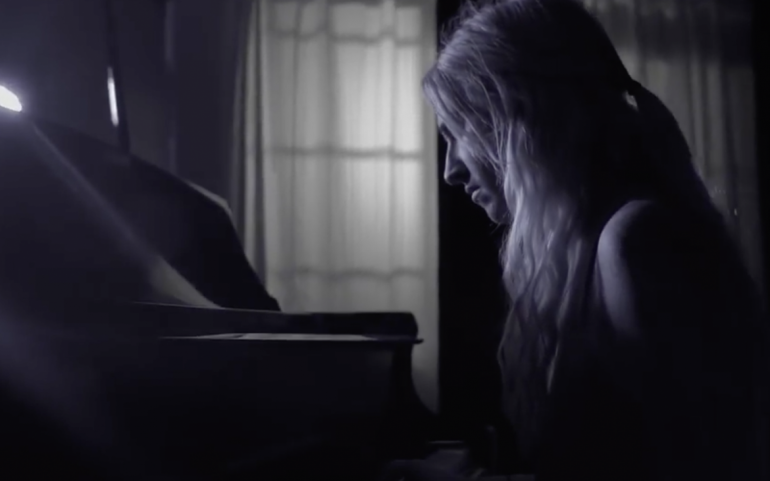 On March 3rd, 2017, I sat down after work to write a song. Songwriting has always been a sort of diary for me; I find that no matter how hard I try, I cannot be dishonest in it. Everything I write pulls from my own experiences and perceptions. I sat down with the intention of writing something “sexy”. I was trying to change my pattern of writing lyrically dark and/or melodically slow songs. I didn’t realize that I was going to write a song about sexual assault. As soon as I began writing lyrics, what became “I Am Not Yours” just poured out onto paper. As I stated previously, I cannot write something dishonest. Trying to force something “sexy” at that point in my life would’ve been exactly that.

I am a survivor of sexual assault. When I wrote “I Am Not Yours”, a sexual assault that I endured was still very fresh, and I had not really dealt with it on an emotional level. I tried for six months to ignore my trauma. This was a pre-Weinstein scandal, post-Brock Turner/Bill Cosby era. There was not much evidence that if I was to pursue criminal charges, anything would come of it beyond further disrupting my life and forcing me to relive the traumatic incident, likely over the course of several years. As far as dealing with it on an emotional level, I didn’t know where to begin. My assaulter was someone that I and most of my friends knew, which complicated matters even further. It’s a lot easier for people to demonize a stranger than to demonize someone that they consider to be a friend.

After several months passed, I finally started telling friends of mine about what happened. I couldn’t hold it in any longer; I could barely eat and was lucky to sleep more than a few hours a night. A few friends I told responded as appropriately as possible; they really comforted me, respected that I didn’t know what I wanted to do going forward, and most importantly- validated my reality. None of them asked me what I was wearing, or if maybe he could’ve just been confused. However, the collective responses I got from the majority of my confidants can be summarized as “I’m so sorry, I just can’t see him doing something like that, I wish you hadn’t told me.” All in all, I felt slightly lucky that nobody directly accused me of lying or questioned my account. However, those people continued go out of their way to act friendly towards him. That spoke a lot louder than their half-hearted words; they would rather be friendly with someone who violated their friend on the most fundamental level than face the uncomfortability of confronting that they had been friends with a rapist. It reinforced to me that society was once again going to take the side of the oppressor, and I was going to be the crazy floozy who lead some poor nice boy on until he felt it appropriate to have non-consensual relations with me while I was near unconscious. I quickly decided that I would not speak about it any further, and would continue to try to bury it.

To my point, when I sat down to try to write something sexy, it would have been very dishonest. Thus, my feelings on my own sexual assault came pouring out. The bridge of the song switches the focus from my experience to reflecting upon the societal attitudes towards sexual assault. For every stance society has that signals to women that it is not safe to speak about it and that they asked for/deserved it, there’s one that signals to men that this behavior is acceptable. I find it crucial to take note of both messages if there is to be change. Of course, I acknowledge that women can be perpetrators and men can be assaulted, but within the confines of a 4 minute song and short article, I’m generalizing to encapsulate the systemic issue. Rape culture is just as detrimental to the men of today’s society as it is to the women. Perhaps if Brock Turner had not been raised to believe that he was entitled to womens’ bodies; that his actions would have severe consequences, he may not have grown up to be a rapist. Perhaps he would’ve been the star athlete that the media tried to hard to portray him as, rather than the rapist that he is.

I decided to share this song with the world, despite already having made an agreement with myself to stay silent about my own sexual assault, because I felt that the message of empowerment could help other survivors. While I was writing it, I was using my outlet to finally begin to deal with the emotions that resulted from my assault, and for the first time since it happened, began to feel power over myself and my body. The title itself was drawn from the lyrics that I wrote while feeling overwhelmingly powerful, angry, passionate, and all of the things that lead me to believe again that I AM my own. My body is my own, I am more than my body, I said no, and no matter what anybody does, I will never belong to anyone. I finally began to feel in charge of myself again, like there was hope for me to direct the turmoil I was left with towards a greater good. In part, I shared this song to bring awareness to the way we as a society treat sexual assault, but mostly because I don’t want other survivors to feel as helpless and silenced as I felt. I felt this so strongly that my own fear around releasing it felt less important. Truly, it came down to the feeling that had I heard songs like this in the media and other representations of survivors finding empowerment, perhaps I would’ve felt less silenced; less alone.

Known as Chega, 22-year-old unsigned alternative artist Megan Mortensen grew up in the Pittsburgh area listening mainly to rock ’n roll, alternative, and pop music; notably The Beatles, Queen, and Alanis Morissette. In time, her music choices began to expand into grunge, soul, r&b, and indie music. Influences from both her childhood favorites and artists discovered down the line can be pinpointed in her upcoming debut EP, “Compulsive”, set to release in early 2018. Megan grew up playing piano and singing, and began writing music in her teenage years. Her writing does not shy away from heavy, controversial subject matter, as can be heard in her debut single “I Am Not Yours”, a timely song about sexual assault. “I Am Not Yours" showcases her ability to write a catchy melody while displaying her alternative and pop roots, and giving listeners a taste of what is to come.