I met Ken Mejia-Beal at the pizza restaurant where folks gather after local Township Democrat meetings. I took a seat across from this handsome African American man who had an infectious laugh and a slight Southern accent. Ken Mejia-Beal immediately struck me as an authentic, "what you see is what you get" kind of guy. He is intelligent, warm, and curious. I watched Ken over the past year and a half create a political podcast, facilitate conversations between community members and leaders to find answers to heavy problems, engage with audiences as a public speaker, and work in Springfield on behalf of issues like affordable housing, climate justice, and healthcare.

As a member of the Advisory Panel of Equality Illinois and the DuPage NAACP, Ken has dedicated a good part of his career towards alleviating socioeconomic struggles faced by all communities using common-sense and bipartisanship.

A little about the District he is running in. It is District 42, and it is one of the reddest districts in the state. However, for the first time, we have a candidate that will be able to flip it. The current state representative voted against Women’s reproductive rights, minimum wage increase, LGBTQ issues, and to prohibit private prisons in Illinois. Ken is the candidate with both the social reform abilities and the fiscal awareness to fight this fight.

I had the chance to sit down with Ken Mejia-Beal and talk about issues and why he's running for the Illinois General Assembly.

Anne : Tell me a little about your background.

Ken : I worked in the financial sector for over a decade. During the financial crises in 2009 , like many others in my field , I was laid off. In between looking for jobs, I started doing volunteer work with various organizations. That led me to meeting local politicians. In turn, because of my background, it led to me helping candidates and later moving into the world of community organizing.

A: How has this led you to run?

K: My professional experience led me to run because not only am I an activist, but I can write and understand policy and regulation. I am always happy to see fellow activist run, however, we also need some policy folks and regulation people at the table. I am a combination of all 3. In my private life, I have dealt with losing friends to HIV, suicide, gun violence, and sub-standard health conditions- these are all fights that I have seen close up.

A: I heard you give a speech once, before you were running, about your work with HIV.

A: Do you mind sharing that story

K: Not at all, before I turned 30, I lost 6 friends to AIDS. By 2030 1 in 2 African –American gay men will have AIDS or HIV. This is an epidemic. We have one African-American gay man in the entire General Assembly in Illinois –one. For me, it’s not about “we need to elect more gay black men” but it is about acknowledging that some of us are 100% qualified to lead and should be allowed to do so , especially in the middle of such an epidemic. And make no mistakes, this is an epidemic.

A: How will you use this message in your campaign?

K: I will use it to say “Hey, we need to work together”. That’s what Americans do. I think sometimes we allow our differences to divide us, and it shouldn’t. Mayor Harold Washington (of Chicago) once said something like “America should be a mosaic where all these different cultures come together to make a beautiful picture” I believe in that. We are all different and that’s ok.

A: District 42 has been a traditionally red district. How are you going to flip the voters?

K: My goal isn’t to flip voters. I think that has been a problem in my district. I’m not running and saying “Republicans are all evil and if you change to a Democrat I can help you”. What I am saying is look at my platforms and policies and if you like them you can vote for me. I am running for everyone.

A: The current State Rep is staunchly conservative and anti – LGBT and anti-choice measures. You’re the opposite of that. How will you appeal to conservative voters?

K: The reality is, I probably won’t appeal to social conservatives. I am truly a liberty candidate. I cannot win over every voter in my district, but once elected I will still Represent them to the best of my abilities. I will still have an open door policy. We can discuss the issues that we do agree with.

A: People are fleeing Illinois because it cost too much to live here.

K: People are fleeing Illinois because the cost is too high based on what we are getting paid.

K: It’s a two part issue really. Is Illinois an expensive state to live in, yes. I am against what I call “Vice “taxes. We rank in the top 3 for alcohol, wine, and beer for example. I think we pay a little over our fair share right now, so I will be a consistent no vote on increasing it. If the goal is to get folks to stop drinking, then we need to educate on the dangers of alcohol, but the constant increase is not something I agree with. We also need to make sure our employees are getting paid more. We tend to look at unemployment numbers and say “We are doing well” but if folks are working 2-3 jobs just to get by that’s not ok. I have a labor plan that would include bringing in higher paying jobs and onsite training.

A: If you are elected, where would you want to see the state shine?

K: Illinois has the potential to shine in every market- being financially stable and a beacon of social progressivism, but we need to keep adding fresh ideas and different kinds of people to the table. We need Democrats and Republicans, young and older, all different races and soci-economic backgrounds at the table. When we add all these voices together and we work together we can have change.

A: Are you willing to work with Republicans on certain issues?

K: It’s not about being willing, it’ll be my job and I will be happy to do so. Republicans want fresh air and clean water. Republicans suffer from chronic illness also. These is nonpartisan issues. I have worked with Republicans, I have voted for Republicans, if the idea is good and can positively impact change, why not.

A: I want to wrap up soon, but I want to hear your take on mental illness in our country. Is this something we can improve through servicing?

K: Yes, but we have a hurdle before that. We can improve on mental health services up and down the country, but if folks are ashamed to get help, nothing changes. Growing up I had a neighbor, she was a wonderful lady. Something happened as she got older, she became paranoid and erratic. My grandma used to host a night for the ladies of the community to get together. Eventually my neighbor stopped coming. The ladies in the group would just say “well, sometimes you just go crazy”. My neighbor, when I was 11 or 12, set herself on fire. I will never forget the screams and glass breaking from the fire department trying to get in. She needed help, everyone knew, but no one addressed it, because we have a stigma issue in this country. If we don’t have a plan in place to remove stigma, than all other plans will fail.

A: Last question – If you were ever stuck on an island what is the one item you would request to make your stay more comfortable.

K: Anne , that’s easy- I’m requesting a working mechanical boat so I can get myself off of said island. 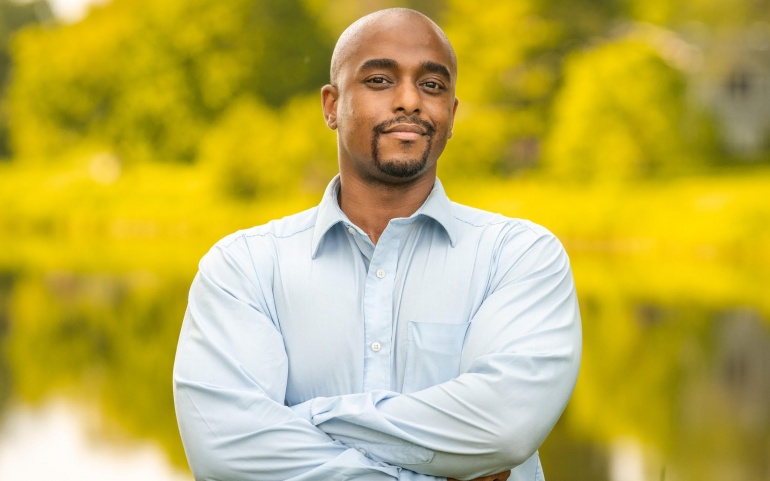 Please go to Ken’s website at kmbfor42.com to check him out and while you’re there, if you can, donate a few dollars, this is a monumental race in our state. When Ken wins he will be the first African – American the county has ever sent to our capital. He will be the first openly LGBTQ. He will be the most qualified. We live in the second largest county in Illinois (930,128 approx.) with only one Representative of color, one. Follow him on Twitter and Facebook at @KMBFOR42

Anne Sommerkamp is an Emmy award winning TV news producer/editor who has worked in Atlanta, Washington D.C., and Chicago. She left the news business to care for her elderly mom and two young children. At the same time, she earned four certificates to work in healthcare; teaching and coaching pre/postnatal women and senior citizens how functional movement can help relieve pain and improve mood. Anne is a lifelong learner who is always up for the next challenge. She has always loved politics and policy so she ran for Illinois State Representative in 2018. After not winning her primary, she continues working for the Democratic Party. She managed a Vote By Mail Ballot Chase campaign that flipped at least three county seats.

Anne enjoys contributing on collaborative teams, creating impactful content, and succeeds by influencing target audiences across multiple platforms. Her motto: Character is doing the right thing even if no one is looking