Donald Trump caused some brief confusion on Tuesday when he announced the pardons of “Drumstick” and “Wishbone.” Some White House reporters scrambled to determine the code names of the two persons possibly targeted by Special Counsel Robert Muller, while others desperately sought records to confirm whether Trump’s two sons had changed their names from Eric and Donald, Jr.

As it turned out, Trump was simply participating in a White House tradition that historians sometimes associate with President Abraham Lincoln, but which did not become an official “pardon” ceremony until President George H.W. Bush in 1989. Trump did pardon two turkeys on Tuesday, but they were not his sons, and they were not any code-named foreign agents associated with the regime’s power grab.

Like most things Trump participates in or touches, the turkey pardoning ceremony turned from light-hearted custom to an egotistical competition. In his usual attention-gobbling style, Trump fanned for the media he hates and used the occasion once again to lash out at his predecessor. By doing so, he did what he always manages to do…ruin the moment with his incessant self-basting boorishness.

Trump boasted about revoking the pardons of “Tater” and “Tot,” whom President Barack Obama issued reprieves to last year. However, Trump admitted his disappointment when White House counsel informed him that the 2016 pardon was one Obama Executive Order that he could not revoke. Instead of letting it go, Trump seized the usually relaxed and jovial affair to affirm that he really has no domestic or foreign policy agenda of his own: He is merely out to undo everything accomplished in the previous eight years.

“As many of you know,” Trump said proudly during the fowl-smelling propaganda event in the Rose Garden, “I’ve been very active in overturning a number of executive actions by my predecessor.” 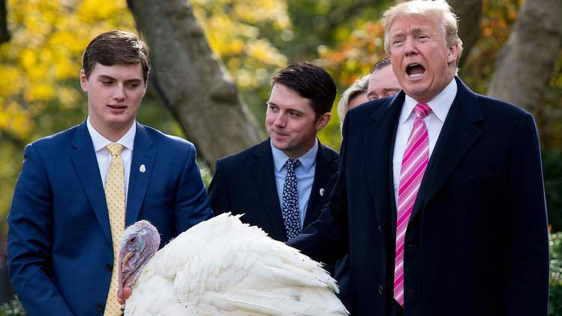 “I have the biggest wattle!” said Trump Tuesday. “Bigger than the wattle of any other president ever. It’s so yuge, you can’t believe it!” (Photo: Jim Watson/AFP/Getty Images)

For the past ten months, Trump has done little to carve out any agenda in Washington. Rather, he has been attempting, unilaterally, to dismantle every Obama-era law, mandate, and executive order — and some accomplishments of former Republicans, too. Whether it is healthcare, immigration, environment, or even such an insignificant issue as a Tom Turkey, Trump’s singular focus is destructive and not constructive. He is not happy unless he is beating his own drumstick against progress.

Despite constantly flipping his snood-like hair for Sean Hennity and Fox News cameras, Trump has not advanced a single achievement of his own. There is no accomplishment in undoing the work of another. It is a shameful and pathetic state of American governance that our leadership rests in a man whose mind is as tiny as his hands — and who is obviously winging it in the White House.

From Trump’s turkey calls to his base of bird-brained followers, to his steady stream of personal attacks on Twitter, he is making one thing clear for all to see. Donald Trump is supremely insecure.

A prime example occurred this week when Trump complained that LaVar Ball had not shown him appropriate homage for obtaining his son’s release from a Chinese prison. “It was ME!” Trump tweeted, seeking adoration and thanks. And despite a year’s passing, Trump still views Hillary Clinton as a rival — tweeting about her on a regular basis as if the election has not happened yet. His desperate need for recognition and reassurance have had Trump so busy strutting like a Tom Turkey since last January that he has no time for governing between rounds of golf.

Two turkeys received pardons on Tuesday, and the saddest part about it is that while Trump waggles his wattle about personal injustices, their continued existence today may be Trump’s most significant accomplishment to date. The 2017 Turkey Pardon is likely the only legal, constitutional, and individual action Trump executes this year.

Mr. Trump, you will not be remembered for undoing what a great president accomplished for the nation. Your legacy will not be that of a leader or a builder. The people who survive your despotic ways and jealous dismantling of our constitutional heritage will not honor your gravy train presidency with historical references. You will be a forgotten featherweight, like a poorly stuffed bird eclipsed by the most American of pies and the nation will rejoice in Thanksgiving when you are gone.

E. Rathgeber is a reclusive freelance writer who is passionate about using his creative style to speak up about civil, political, and human rights. He has ten years of legal experience and calls himself a Democratist to distinguish himself as someone who does not support the party, but the ideals of democracy. His political blogs and anti-Trump insights appear @IdeaDogs on Twitter and Idea-Dogs.com.
Featured Image: Chip Somodevilla/Getty Images
Tags: