There’s a game being played somewhere in Donald Trump’s mind. No one is quite sure of what the game is or what the rules are, or even what the objective is. None-the-less, yesterday afternoon Trump declared, “America is in the game and America is going to win.” While 325 million people scratched their collective heads on Monday, Trump apparently had developed the game strategy, called in the players, and awarded himself a trophy, medal, or maybe even another Time Magazine cover.

Also on Tuesday, Trump unveiled a new national security plan that echoes sentiments of another Uber-maniac who sought to elevate Germany to world dominance in the 1930s. Describing his game plan during a press conference at the Ronald Regan Building and International Trade Center, Trump emphasized that the United States would attain some future position of dominance over all other nations.

Perhaps one of Trump’s remaining advisors, aides, or nurses should explain to him that we are only weeks away from 2018. The world is much different than it was when Hitler wrote Trump’s favorite book and his apparent guiding light for modern political suicide. Trump does not seem to realize that the United States is but one tiny part of a global community and that he is not playing Monopoly in midtown Manhattan anymore. There are no winners in the game of global domination.

There are 195 countries occupying our earth — though Trump does not recognize at least one of them and is perhaps too ignorant to name another 189. The United States accounts for slightly less than 5% of the total human population on the planet and only 16% of the land area. Our country does not hold a majority in either population or land and Trump has no legitimate right to project America as some dominant authority. His imbecilic isolationist perceptions and unchecked grasps for global supremacy demonstrate his complete lack of understanding of modern politics.

The mere fact that he refers to his international policies as a “game” to be won trivializes the entire population of the United States. It is an insult to a nation’s citizens for its self-assumed leader to cast them as simple pawns in a game — much the way America’s founders thought it demeaning to be commoners subject to royal monarchy and the inherent abuses that accompanied their stations. In a matter of one year, Trump has become the modern equivalent of King George III.

So alike are Trump and the King that they share a sentiment about opposition that is purported to be George’s favorite saying: “Everyone who does not agree with me is a traitor and a scoundrel.”

During his remarks on Tuesday, Trump bumbled through a few key portions of his speech, but managed to identify “four pillars” of America’s new security plan focused on protecting the homeland. It would be very easy to confuse Trump’s rambling and sometimes drunken or stroke-slurred comments (especially those about the Korean “peniswalla” — remember he has the best words and peninsula is so commonly boring) with an Adolf Hitler tirade from last century.

Anytime Trump delves into speeches of the “homeland,” it strikes a Nazi chord that is very unsettling in a democratic republic like ours. The homeland in 2018 is a blue-hued rock three orbits from the sun…and not Trump’s America. 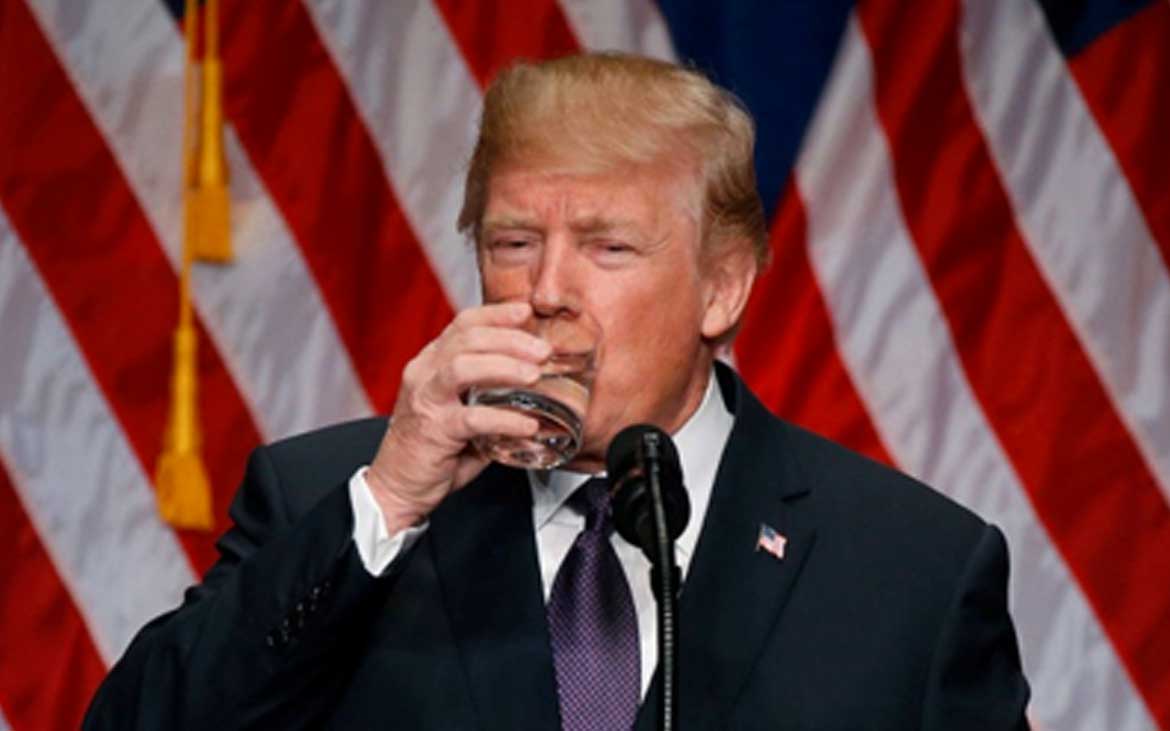 Trump needed a water break only seconds into the game. Photo: Joshua Roberts/Reuters

While a little competition is good, a lot of cooperation is better for the planet and the people of every nation. International diplomacy, nation building, and the earth’s future are not games to be played by infantile millionaires with bad hair and no concept of right and wrong. Trump’s foreign policy and four pillars of America-first doctrine are simply phallic ideations that represent nothing more than his personal and political irrelevance and impotence.

Instead of more hollow ideals, we need a solid foundation that reestablishes the United States as a cooperative global leader and a beacon of rights, freedoms, and democratic values. We need an adult leader and not a child playing a game with the future.