When Dave Roberts (the manager of the Los Angeles Dodgers) and I played baseball at Ucla, one of the many amazing experiences we had was to have Coach Wooden come speak to us and share his incredible philosophy of life with the team. Coach Wooden, for those of you who don't know, was the winningest coach in college basketball history (10 national championships at Ucla), and his 'Pyramid Of Success' philosophy is modeled & marveled at all over the world. From Kareem Abdul Jabbar to Russell Westbrook, the Bruin family is taught, not about winning, but about the underlying principle of being EXCELLENT: 'never try to be better than somebody else, but never cease to try to be the very best that you can be.' That way you don't need the external motivation of an 'enemy' because you always have the internal motivation of perpetual excellence. We also learn that 'Competitive Greatness' (the pinnacle of the pyramid) is built on things like self-control, cooperation & team-spirit (which we're taught are paramount to being a GREAT leader. 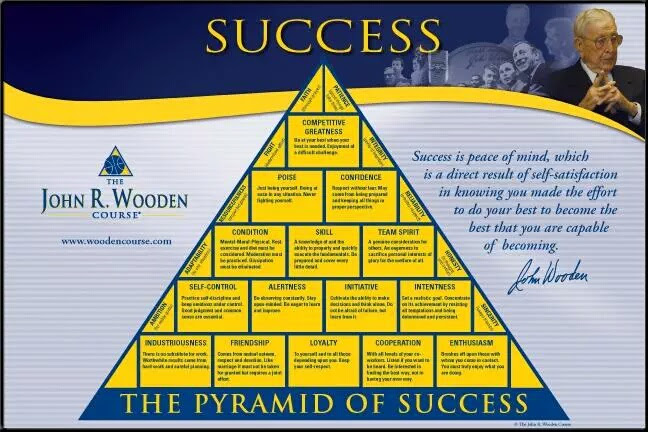 So for folks like Dave and I (where Dave is an American of Asian & African-Ancestry who was born on a military base in Okinawa, and I am an American of African-Ancestry who was born on March Air Force base, here) trying to reconcile this Washington BS about the NFL with the Wooden legacy of 'disagree without being disagreeable' has been painful & disheartening, especially coming from the alma mater of Army Lieutenant, Jack Roosevelt Robinson (who many of you know as Jackie). As children of military men we know that players taking a knee as an empathic plea is not a protest of the flag, the anthem or the troops. As men in groups that are IN THE MINORITY (be careful of labeling yourself or others with a less-than identity like 'minority') we know that players taking a knee as an empathic plea DURING THE ANTHEM (not against the anthem) is a SHOW OF SUPPORT for EQUALITY & JUSTICE! But people in power who are looking for 'enemies' are saying otherwise. And people in power who are saying otherwise are deliberately poking truth in the eye and choosing violence over excellence (where 'violence' is "protective energy turned into attacking force" aka PETI AF)

Now if 'group privilege' is where things work to the benefit of ONE group in comparison to another group, then I am fortunate in that I have academic privilege, athletic privilege and gender privilege. Meaning in all of those areas I don't have to worry about my dignity being snatched at any moment around any corner, like I do when it comes to my lack of ethnic privilege. To be given the benefit of the doubt as a male athlete, and then to be met with detriment of the skepticism energy as an American of African-Ancestry, has been a painful blessing. Painful in that I know what it's like to have a door closed because of who you are, and a blessing in that I know what it's like to have a door opened because of who you are (as an interesting experiment, next time your out look and see who literally gets the door held for them in public, and who seems invisible when it comes to sidewalk passings).

One benefit of being in a privileged group is that the toxic behavior of one group member does not stick to the entire group. So terms like 'lone wolf' and 'mental health' are used as buffers & separators to protect the groups image. With non-privileged groups you get group terms like 'thugs' 'emotional' 'illegals' & 'hysterical' painted onto the entire group, reinforcing STEREOS with emotional word pictures (which when used by people within that group become self-fulfilling prophecies that lead to learned helplessness. Do you see how toxic the circle of violence can get?)

So when Harvey Weinstein gets caught diminishing women's humanity & snatching their dignity by way of harassment & assualt, instead of empathizing with our sisters and creating a 'Compassioning' culture, buffers & separators are used and other women are subjected to a 'bullying' culture. I mean the balls of some news anchors, who are the same ethnicity & gender as Weinstein (& who were indoctrinated by the same misogynistic social clubs that many of us were influenced by), to buffer & separate themselves by blame shifting to Hollywood & Hillary, is such a luxury of group privilege that it's kinda like waving the flag of a group of traitors and criticizing #TakeAKnee.

One thing I've learned as a nonviolent-empathy coach, especially from my time in India with Gandhi's grandson, is the powerful effects of the art of empathic immersion. Where you take the feelings & needs out of one situation and replicate them for someone in an experience that they can connect with. So if a group of people are frustrated because their collective need for respect isn't being met, instead of 'counter-punching' those responsible we immerse them in a virtual experience where frustration & respect are front & center (because even though the creators of pain are logically the fair target, if we really want them to GET IT we need to match their violence with nonviolence, as unfair as that may seem. Unless of course protective force is necessary for self-defense).

Example: Here's an empathic immersion conversation I had with an American male of Caucasian-Ancestry who played pro sports, but dealing with his own personal pain was unable to see others collective pain (especially women)

Dude: This PC shit with chicks is way out of hand. You can't even flirt anymore without some betty crying harassment.

Me: So it's really frustrating when you'd like the freedom to be yourself, and the rules of male/female engagement are different than they were a few decades ago?

Dude: Exactly! I mean I was just joking around with some wench on social-media, and just when I thought we were getting along she went all hysterical on me.

Me: So you feel irritated when you're not being understood, and you'd like to be trusted and know things are safe for you online?

Dude: I mean how hard is that to see? You totally get me man.

Me: I'm guessing alot of women want exactly what you want. Safety, understanding, trust, freedom & certainty. I'm also imagining that since women as a collective have experienced so much terror & trauma, historically, that when an individual woman channel's that much accrued collective pain, it's like having an apple in your throat that men can't see, and not being able to breathe or swallow.

Dude: Wow! I never thought about it that way. Yah that would suck...but hey WHAT ABOUT all the pain I've had in my life?

Me: Ya know how as you moved up the ranks of sports with all of your hard work, you went from being a rookie to being a veteran?

Me: Yah know how even though you didn't like it you got hazed as a rookie?

Me: Well, after being a 10 year veteran in the pros what would you have done if some rookie walked up to you and said 'go scrub my toilet with a toothbrush, you scumbag jackass'?

Dude: WTF? OMG I WOULD KILL HIM. OMG, NO IT WOULD NEVER HAPPEN. WTF ARE YOU EVEN TALKING ABOUT? I'M SO PISSED THINKING ABOUT IT THAT I CAN BARELY BREATHE!

Me: For women (& Btw, your labels for females are JENK), having their dignity & humanity snatched at any moment around any corner is a daily concern. And the next time you think a woman isn't being fair to you, remember the pain that you just felt. And be thankful that yours was only temporary, as she navigates the daily balance between interacting freely & her safety!

Dude: I don't know what to say.

Me: Now there's something I can help you with. I call it nonviolent-empathy, and it's where nonviolent communication meets empathic listening skills.

*Let me give you guys a moment to fully take that in...take a couple of minutes, and if your experience was heard just now in a way that you can feel it behind your eyes, just know that some of us really do have your empathic back!

(at the same time, I've played a role in this culture too. I am NOT innocent. So in this moment I am truly sorry ladies for not always finding the strength to stand up to what I knew at the time was not life-serving behavior. I truly apologize, and I am here for you as a gender ally).

So that's partly where we are. Now where do we go from here?  For my part here's what I'm going to do. I'm going to harness the optimism of the American dream. I'm going to fly with the post civil-rights confidence of a butterfly having no memory of the chrysalis. And I'm going to forever strive to be the very best that I can be and lead/listen empathically. Which means living, applying & teaching the empathic art of nonviolent empathy (& swimming excellently in the pool of self-control, cooperation and team-spirit)! Will you join me (& the #RoseArmy) in the field of all possibilities & 'Competitive Greatness' team-humanity? Will you join in honoring Coach Wooden's legacy of EXCELLENCE by finding ways to 'disagree without being disagreeable'? #MeToo