My name is Ella. I am from Uganda. I identify as lesbian, and I have been in a long term relationship with my girlfriend. Uganda is not tolerant of such relationships so we had to keep things secret. Things were okay until the night of 23rd October 2016.

We were in a lodge making love and people in the city found us. They were enraged. They tied us up and made us march on streets as they beat us. They made us say very many words like we are “curses to the society,” “abnormal,” and “prostitutes.”

So they were beating us with all kind of things – sticks, stones, shouting at us and very many people gathered. They suggested to burn us to ashes. They looked for paraffin gas and as they were collecting car tyres the police arrived. We thought they saved our lives, and they probably did. But then they arrested us for indecency.

The following day our parents came. We thought they had come to save us. Little did we know they had come to tell the police to torture us and beat us so that we should never be lesbians again..it was too much for us. A lot of pain, wounds on our bodies, insults...life seemed hard..so when we left the police station, the discrimination was too much and insults in public we decided to shift and go to the city.

We rented a house we started staying together but still things did not seem to be okay.

I personally would get messages from a strange man telling me a lot of threatening things. How I should get married, how he wants to get me pregnant. It was the night of 4th Jan 2017 when my girlfriend was away, the man came and raped me. It has been the worst thing that has ever happened to me in my whole life that every time I remember about it I break into tears and feel I should not be alive...The gu guy wanted me pregnant. [Editor's note: “gu” means dirty or nasty in the Luganda language.]

In the morning as I was heading to the police station to report the rape I met my cousin and she told me all this was set by my own parents. They wanted me pregnant so that I would get married to that gu guy and “get normal,” as they call it. When I reached the police station, instead of helping me, they arrested me and accused me of recruiting fellow girls into homosexuality. They did not even listen to me. I called my girlfriend and told her I was arrested. She came to check on me on 5th, and they arrested her, too. We were both released out of the police on bond.

I thank God for my cousin. He has been my counselor and he would keep me strong. Sometimes I would take sleeping pills to sleep. Life was the worst. Everything around me did not make sense. After some weeks I felt I should not be alive. I have been through a lot and decided to take over a dozen of the Piriton sleeping pills so that I would die but I did not.

I knew we had to leave Uganda. I applied for a South African student visa, but was denied. I applied for an American conference visa and got denied. But after a few months, I applied for an American student visa and was granted! My heart felt at peace for the first time in a long time. I couldn't imagine being in a place where no one would insult me, where I would not be arrested time and again just for being who I am, where I could live far away from the person who raped me, where I could study, and build a life for myself. I was excited: thank God. At last I felt my heart was going to find peace.

So on 24th of August 2017 - the exact day was to report to police,  I left the country straight to Washington DC, arriving at about 8:00 AM. Reaching immigration, I went through some interview and the lady asked me a lot of questions. She didn't stop. It went on for hours. I tried as much as I could to defend my student visa. I knew it was the only thing to get me to USA. I did not know if I told her the whole truth of my story what the results would be.

I was scared. You cannot imagine what it is like to sit before an officer who has your whole life in her hands.

I have never told any officer about my story. I have never even discussed it with any officer. I was  worried, traumatized, tired, hungry, and speechless. She asked me if I was scared to go back to Uganda. Nothing was running through my mind but the raping, the beating, and being close to burnt to ashes. I really did not know what to do or say. She had taken my phone and restricted me from communicating. I had nowhere to turn.

I started to wish I could get lawyer and open up to him or some one I would trust with my information or talk to my cousin. Even before I left a lot was being talked about the new president of America, and how he is going to ban acts of homosexuality. We thought the new president does not like gay people, and if I told the officer I was gay, she would deport me on the spot.

How do you answer such a question? I lost my words. I told the officer "no," that I was not afraid to go back. But deep inside I was dying. I couldn't think straight. She kept asking questions, my God, so many questions. I did not have the strength to answer them. She forced me to say that my cousin was my boyfriend, because that is what she wanted to hear. I wanted to talk to my cousin. I wanted to talk to a lawyer. I did not know that my cousin was trying to find a lawyer for me, because she took my phone. I just told her whatever she wanted to hear, thinking this was the way for me to enter the United States and be free from my persecutors.
Then she told me I was denied entry to USA. I almost ran mad. I wish I got a chance to talk to Mr. Hassan [Ahmad], a lawyer who eventually took my case. I felt I should shout on top of my voice or run around crying. So much was on my mind.

I went down on my knees and begged the officer to understand me and at least give me a phone. She refused.

She knew if I talked to someone I would get  the legal advice I so badly needed. So she held my phone. I was helpless. I just sat in a chair cried myself out and dozed off. I was there for almost 5 hours, having not eaten the whole day, nor even water to drink. I felt like I was back in Uganda already. I wished for death at that exact point and after some time was taken to a detention room, told to remove my shoes, sweater, and stockings. I was to sleep under the harsh air conditioning until my flight the next morning.

I was being deported back to Uganda. I felt lifeless. Couldn't she let me make a phone call? I should die.

So the next day, still on an empty stomach, no one to talk to, they put me on a plane. My flight was excruciating. There was a brief layover in Dubai. I had to beg the official with my documents to give me at least my phone. He refused, and I started crying. Just imagine what it is like to be completely helpless, completely powerless. It took time, but eventually he gave me my phone and told me to go directly for the connecting flight to Kampala.

That was my chance. I ran. I hid in the airport. And finally, I got in touch with a lawyer, Mr. Hassan Ahmad. He listened to my story, even as airport security and the airline officials were looking for me. He told me he had demanded to speak with me when I was in custody at Dulles Airport. He told me they refused, even though he told them I was traumatized and not able to talk about my fear.

Mr. Hassan was able to contact the United Nations High Commissioner for Refugees, or UNHCR. Through their efforts, I was able to stay in the Dubai airport, but I did not know for how long. Things still were not easy: the first two weeks I slept in chairs, contracted a UTI, suffered nosebleeds, and I was on my period too. I only had the clothes on my back because my luggage flew on to Kampala. Mr. Hassan and UNHCR worked to get me a care package with new clothes and toiletries and hygiene products.  Finally they took me to a hotel inside the airport (since I was not allowed outside into Dubai) and given voucher meals. Eventually I came to Kenya where I have been for a month. 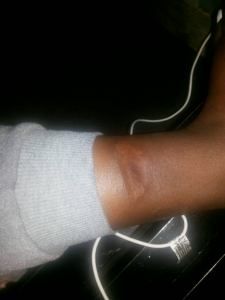 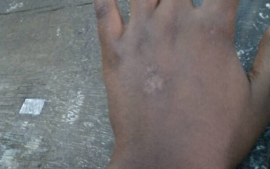 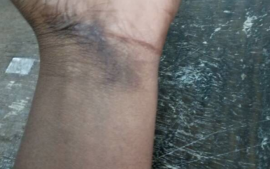 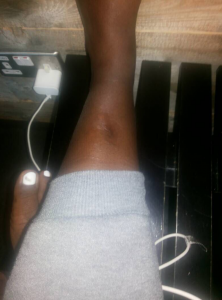 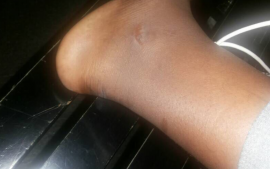 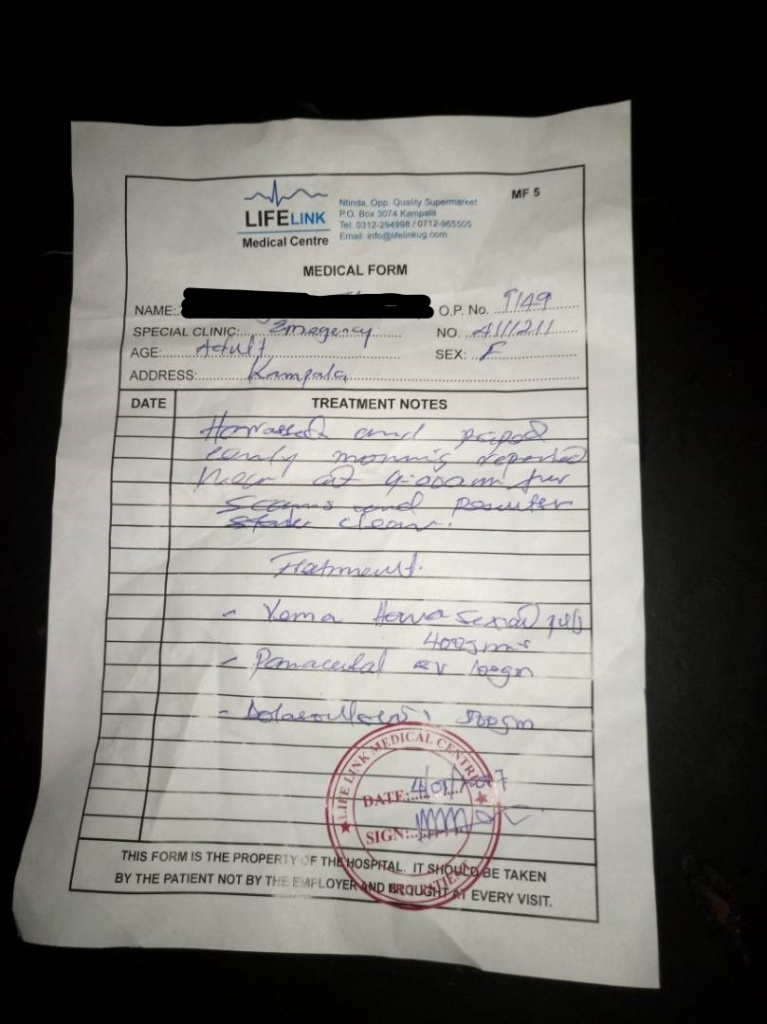 Lawyer's Note: Ella wants the world to know how she has suffered. What kind of country are we that we claim to allow people fleeing persecution and torture to be denied access to a lawyer to learn about their rights? What good is a right if it can be so easily denied? What if someone had a mental defect, or was a small child? Would we also deport them because they could not articulate a credible fear of persecution under 8 USC §1225? Ella lacked the capacity to talk about her fear. But this time she had someone to speak for her, and still she was refused. This is what President Trump and Attorney General Jeff Sessions mean when they call for “rigorous enforcement” of the immigration law. This same rigorous enforcement caused them to try to prevent undocumented immigrant Jane Doe from having an abortion. This same rigorous enforcement caused them to detain  Rosamaria Hernandez, a 10 year old girl with cerebral palsy. It is why they are going after the most vulnerable. It is why they arrest people who are trying to follow the law and legalize their immigration status.

Is this the America we want to be? Here's what you can do: