While the Federal Communications Commission (FCC) voted to kill net neutrality rules on December 14, 2017, I’ve said before and I’ll say again, where the Federal government steps back, Cities step forward to protect an open internet.

Just a week before the vote, Mayor Bill de Blasio joined sixty-eight cities Mayors and elected officials in signing a letter to the FCC in opposition to FCC Chairman Pai’s proposal to roll back the open internet protections.

On the day of the vote, I joined others on the steps of the FCC, adding my voice to millions of others, as a loud collective voice (community organizations, consumer protections groups, other government leaders, and the tech industry) against the vote to repeal. I also noted that we would not stop in our efforts to keep an open internet. 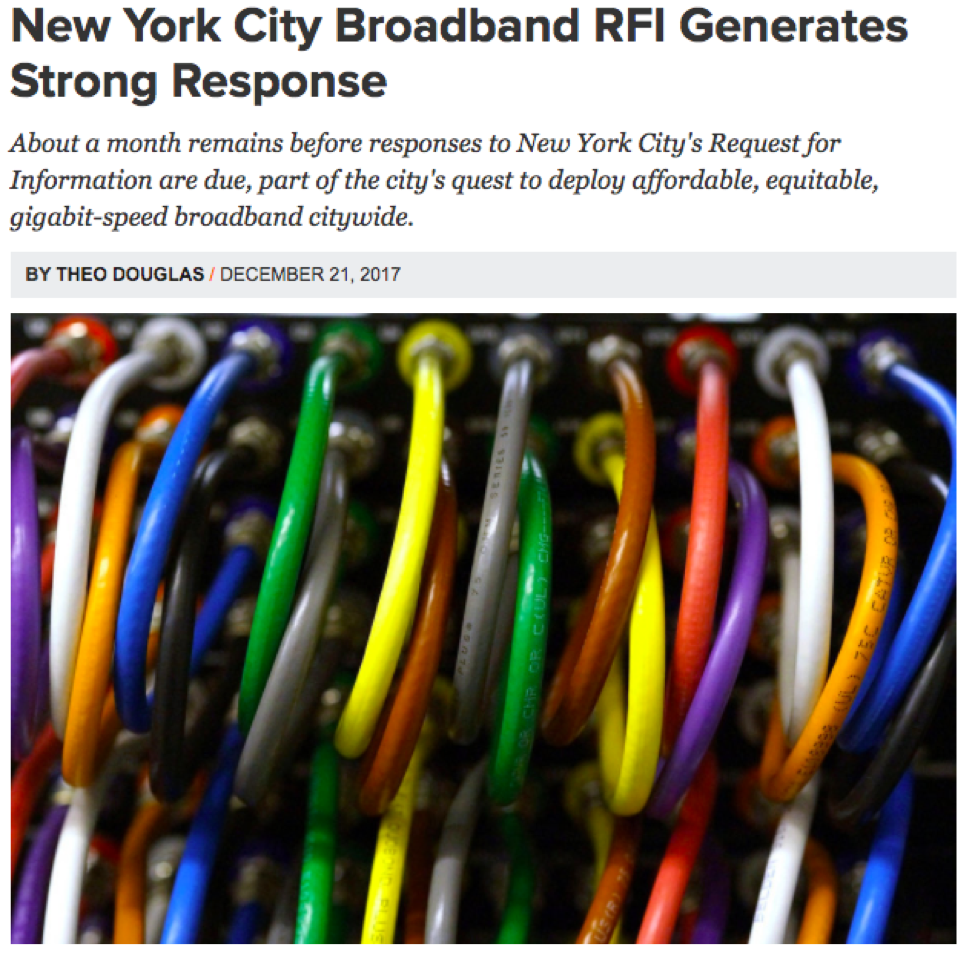 We continue to be forward-thinking and are reviewing the FCC’s standard for internet speed and whether it meets our own performance standard. In a forthcoming State of Broadband report, we will publicly reveal the current state of broadband in New York City and illuminate the barriers to access. The report will inform our path forward in making sure that providers are delivering broadband in a way that meets our five principles for infrastructure and service: Equity, Performance, Affordability, Privacy and Choice.

Today, Mayor de Blasio has coordinated a bipartisan letter to Congress supporting the Congressional Review Act (CRA) resolution. 76 cities from 23 states, plus Washington, D.C., have signed on representing a total population of over 43 million people.

In a repeat of last July’s “Day of Action,” cities, NGOs, and tech are coming together again to galvanize everyone in an effort to secure the #OneMoreVote needed to pass the CRA resolution in the Senate.

As part of today’s internet-wide push, I’m calling on every person, everywhere, who cares about a fair and open internet to lend your voice in support of CRA to save net neutrality. Read the following letter, and if you agree, let your congressional representative know that you support the CRA resolution. Every voice and every vote counts!

The decision by the Federal Communication Commission (FCC) to dismantle open Internet protections cannot stand. It represents a stark and unwarranted attack on our communities and residents. We, the undersigned municipalities representing 43 million constituents, write in support of the Resolution of Disapproval of the FCC’s Order to repeal net neutrality rules.

As local leaders, we recognize the direct and substantial benefit that broadband connectivity and access to a free and open Internet can have for our residents. The cores of our communities — our economies, educational institutions and government agencies — increasingly rely on broadband connectivity. The transformative power of the internet drives economic growth, individual and community development, and better government for all of our residents. As more than 60 Mayors wrote to the FCC in July, “full repeal would have a particularly negative impact on middle- and working-class families, while simultaneously restricting access to certain types of online content and services to those who cannot afford to pay more.” Many of these concerns were shared and voiced in 13,000 pages of net neutrality complaints filed by millions of citizens and hundreds of community organizations and local leaders, which the FCC willfully ignored.

A free and open Internet forms the backbone of the twenty-first century economy. The FCC has thrown away the fundamental democratic principle of net neutrality. We strongly support the Congressional Review Act resolution to right this wrong by reversing the FCC’s Order.