"TrumpRussia" encompasses alleged ties between Russia and Donald Trump and his surrogates, along with Russia's interference in our 2016 election. By now, most Americans are familiar with TrumpRussia, whether or not they think that it's "Fake News."

Spoiler alert: it's NOT Fake News.

The TrumpRussia scandal is incredibly complex and allegedly involves real estate deals, global finance, money laundering, organized crime, "kompromat," espionage, politics, and otherwise. Unsurprisingly, it's incredibly difficult for ANYONE to get one's head around this story. Moreover, the onslaught of media bombshells about TrumpRussia has intensified to a truly dizzying pace. Indeed, just over the past day, three TrumpRussia bombshell stories were reported by the "failing" New York Times and the "Amazon" Washington Post.

What do these latest media bombshells tell us? And how do these stories tie back the infamous "Steele Dossier"?

(For those who don't recall, the Steele Dossier is an opposition research report on TrumpRussia, compiled by former MI6 spy, Christopher Steele and originally commissioned by one of Trump's Republican primary opponents.) 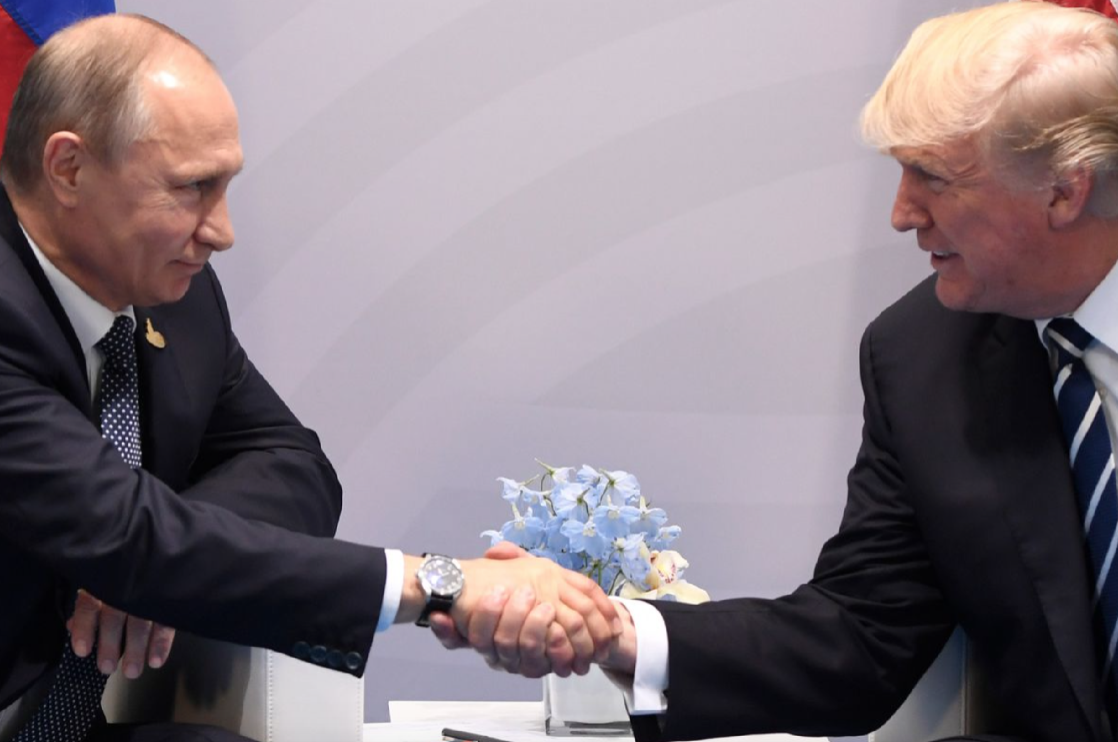 Yesterday, the Washington Post published a bombshell story reporting that, while Donald Trump was running for President, he was negotiating a deal to build a "massive Trump Tower in Moscow". That's right, the guy who vehemently denied having "any dealings" with Russia throughout his campaign was actually in the midst of negotiating a MAJOR real estate deal in Russia. In fact, Trump's company went so far as signing a legal "Letter of Intent" with a Russian company for the Trump Tower Moscow project. 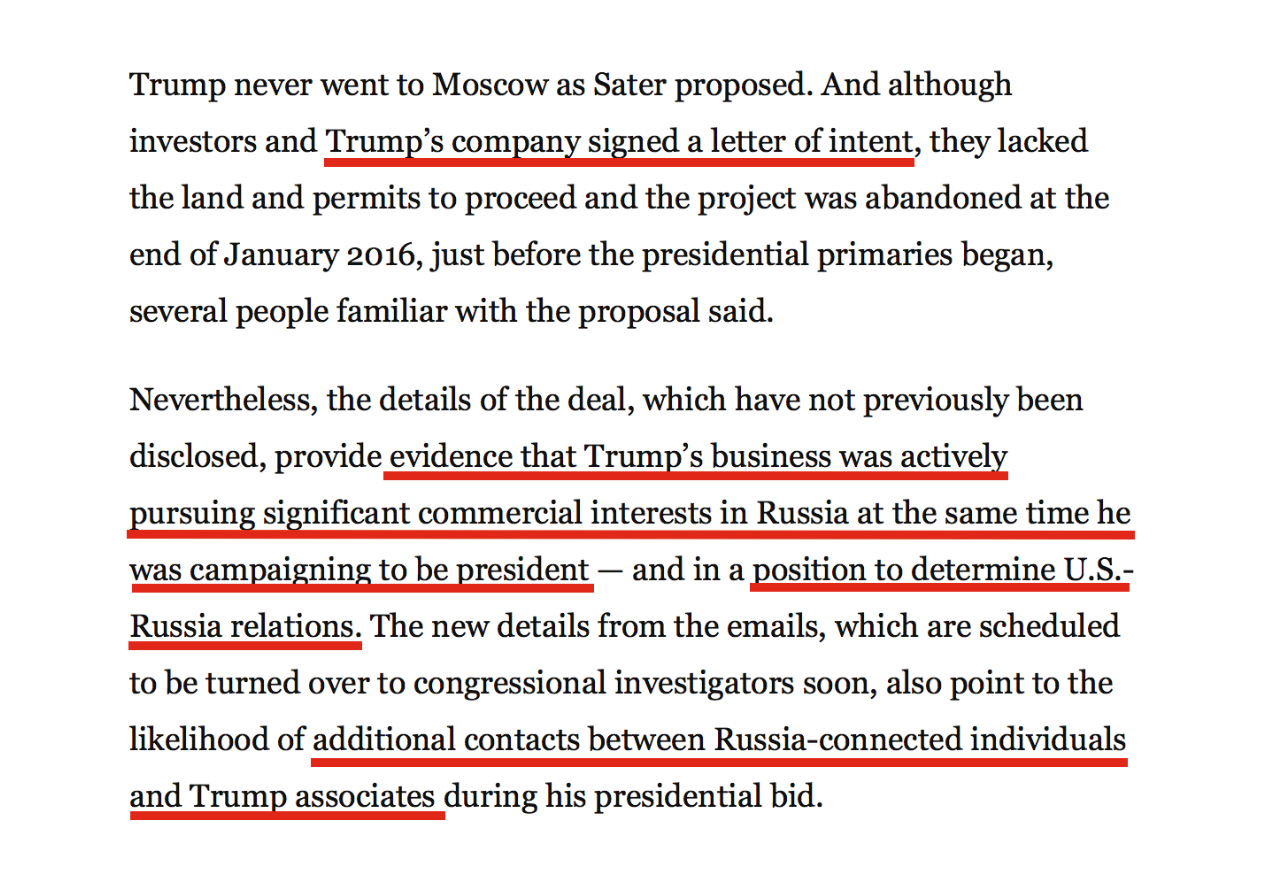 Agalarov's pop-star son, Emin, along with his agent, Rob Goldstone, helped arranged the Trump Tower meeting in early June 2016 between Donald Trump, Jr., Jared Kushner, Paul Manafort, and Kremlin-connected lawyer Natalia Veselnitskaya, along a Russian cast of characters, including notorious "former" Russian counterintelligence officer and hacking expert, Rinat Akhmetshin. According to emails from Goldstone to Don Jr, the purpose of the Russian lawyer meeting was "to provide the Trump campaign with some official documents and information that would incriminate Hillary and her dealings with Russia and would be very useful to your father...(as) part of Russia and its government's support for Mr. Trump - helped along by Aras and Emin." However, the Don Jr maintained that they only discussed adoptions, which is generally understood to mean the U.S. sanctions on Russian individuals.

Today's bombshells added even more fuel to the TrumpRussia fire. Another report by the Washington Post confirmed that Donald Trump himself signed the letter of intent for Trump Tower Moscow on October 28, 2015, over 4 months AFTER launching his presidential campaign. Despite Trump's self-proclaimed deal-making acumen, the Moscow project had stalled by January 2016, prompting Trump's lawyer, Michael Cohen, to reach out directly to the Kremlin. Specifically, Cohen emailed Dmitry Peskov, the Kremlin's spokesman, to request his help with the Trump Tower Moscow project.

You might recall that Dmitry Peskov had a supporting role in the Steele Dossier. According to Steele, Russia had compiled "kompromat" (compromising material) on Hillary Clinton, which was "controlled by Kremlin spokesman, Peskov, directly on Putin's orders."

Despite Don Jr's claims that nothing of import was discussed in June at the Russian Lawyer meeting, the Steele Dossier reported that the "Kremlin had been feeding Trump and his team valuable intelligence on his opponents, including…Hillary Clinton. Moreover, the Steele Dossier reported that, "in June 2016, this Russian intelligence had been very helpful."

And then, Trump's day went from bad to worse, with the New York Times report of multiple emails written by Felix Sater. Sater, a former business partner of Trump, is a Russian-born American, who was convicted of multiple felonies and became an FBI informant, while at the same time, he and his company, Bayrock, allegedly laundered Russian oligarchs' money into real estate in the United States.

The New York Times reports that Sater sent emails to Donald Trump's lawyer, Michael Cohen, bragging of his ties to the Kremlin. Even worse (for Trump), Sater promised to enlist Russia's help with Trump's presidential bid, writing, "I will get Putin on this program and we will get Donald (Trump) elected...Buddy our guy can become President of the USA and we can engineer it. I will get all of Putins (sic) team to buy in on this."

So to recap: Vladimir Putin put his spokesman, Dmitry Peskov, in charge of Russia's dossier of kompromat on Hillary Clinton. Trump's laywer, Michael Cohen, emailed Peskov about the stalled Trump Tower Moscow project. This Trump Tower Moscow project was partnered with Aras Agalarov, whose son, Emin, along with his agent, Goldstone, arranged the Trump Tower meeting with the Russian lawyer, ostensibly so that Russia could share its kompromat on Hillary Clinton. And on the side, Trump's former business partner, Felix Sater, sent multiple emails to Cohen promising to enlist Putin's help with the election.

After all of the denials of ANY involvement with Russia by Trump and his associates, we are supposed to believe this is all a coincidence?