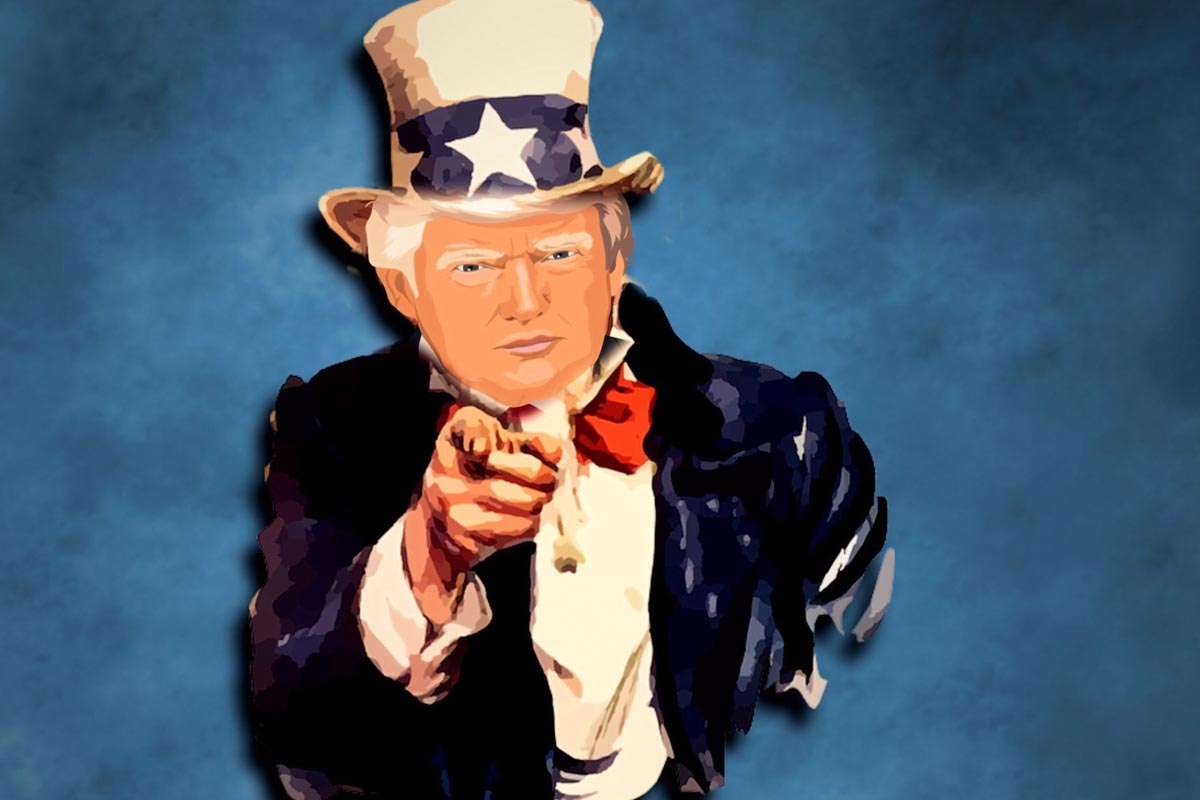 In his book-length poem The People, Yes Carl Sandburg quotes a "battered barrister" as saying, "If the law is against you, talk about the evidence...If the evidence is against you, talk about the law, and, since you ask me, if the law and the evidence are both against you, then pound on the table and yell like hell." Donald Trump clearly has no understanding of the law. Likewise, it is a gross understatement to say that the President has no grasp of or interest in facts, evidence, or the truth. What he does do extraordinarily well is pound the table and yell like hell. In fact, perhaps the only talent Donald Trump has demonstrated in his long career as a showman is a genius for using spectacle and empty claims to so distract a gullible audience that they acquiesce to his egocentric and two-dimensional worldview.

That talent is now on full display as Trump and the Republican Party use social media, administration-friendly talking heads, and weekend news shows to attempt to drown out the analysis of their catastrophically dangerous agenda with the sound and fury of their rhetorical tropes. As college freshmen around the country settle in to their "Critical Thinking 101" courses, it might be useful to use the tools of rhetoric and logic to analyze a few of the sleight-of-hand techniques currently employed by Republicans. Three key topics offer fertile ground for this approach: fake news, kneeling during the national anthem, and misogyny.

The Trump/GOP Response: The actual fake news is the mainstream media. Despite their extensive vetting of articles and sources, their occasional mistakes and - more importantly - their critiques of the lack of factual support for Donald Trump's claims make them "fake news." They cannot be trusted.

Here, Donald Trump and his allies are using rhetorical misdirection that relies on the logical fallacy of equivocation, a fallacy in which the speaker intentionally misuses a word. The tide of public opinion is strongly against "fake news," but the actual meaning of the term - outright fabrications without reliable sources or credibility - hurts Donald Trump, whose agenda relies on it. To counter the effectiveness of the charge, Trump completely redefines it to mean the opposite of its intended use. Instead of being a criticism of the quality of the journalism - whether or not the news outlet reported verifiable facts in a credible manner - "fake news" becomes an attack on the news outlet's unwillingness to support Trump's agenda.

The need for this approach is understandable. Trump wants to keep saying and doing things that run counter to the observable reality of the world. The largest obstacle to Trump's agenda is the ability of the media to point out that reality, over and over again. The easiest solution is for Trump and the Republican Party to convince their base to mistrust any legitimate source of verifiable facts.

The fact that Trump and his allies are doing this disingenuously is obvious in their criticisms, which never address the methods, sources, or evidence used by what Trump calls the "enemy of the American people." Instead, Trump's only basis for his attacks is that the media doesn't agree with his poorly-thought-out and often outright deceitful claims.

What Trump has labelled "fake" is actually "factual," but it gives his base an excuse not to critically examine the overwhelming body of evidence against every virtually every policy and claim of Donald Trump. In addition, Trump's misappropriation of the term, which he now claims to have invented (another lie), undercuts the ability of the public to discuss the actual issue of fake news and how it significantly undermines the electoral process.

Simply put, news sources should be judged based on the rigor of their research, not the consequences of their conclusions. Any educator or political figure who claims otherwise is chipping away at one of the key pillars of our democracy.

Kneeling During the National Anthem

The Rhetorical Fallacy/Red Herring: Strawman Argument
The Public Critique: The government is not adequately addressing the needs of, and dangers faced by, persons of color.

The Trump/GOP Response: How dare these people insult our military personnel!

This bit of rhetorical trickery - a duplicitous implementation of the strawman fallacy - is particularly distressing, because it shows the Republican unwillingness to listen to people of color. In a strawman argument, the speaker ignores what their opponent is actually saying, restates their opponents' point inaccurately, and then attacks the (false) restatement. It is a remarkably effective tool when the audience is not following closely enough to catch the misdirection.

The anthem protests represent a group of people who feel their voices are not being heard, acting in a way that broadcasts their message to an audience that might not otherwise hear it. The protestors want to draw attention to violence against people of color. Yet, rather than listen to what those peaceful protestors have to say, Trump and his minions have completely reframed the issue such that it ignores issues of institutional violence and becomes one of insulting our military personnel.

Any competent leader's first response would be to instead say, "As a wealthy, old, white man I am far removed from the experiences of young people of color in this country. Can you help me understand what you are seeing that I am not?" Sadly, rather than listening, the GOP has parroted in lock-step the claim that they will not affirm any "disrespect of our soldiers."

This is absurd for several reasons. First, it ignores what is actually being said by a silent knee during the national anthem. Secondly, it ignores what those of us who have served or are serving in the military are saying, which is that we do not find anything disrespectful about living out the freedoms we swore to protect. Finally, it ignores the most vocal source of disrespect for our military: the draft-dodging President whom the GOP nominated despite his attacks on a Gold Star family and his insults toward a veteran captured fighting in the war Trump avoided.

It is easy to understand why Trump and his allies are willing to make this hypocritical, strawman argument. The Trump administration record on civil rights is abysmal, and likely only to get worse with Jeff Sessions as Attorney General. If the President is forced to talk about the issues affecting people of color in this country, his policies and those of his party will be shown to be failures, and so they shift the topic to safer ground. It's never acceptable to insult the troops (unless you're Donald Trump), so the Republicans ignore what people of color are actually saying and accuse them of doing just that.

This misdirection could be easily solved. Instead of letting the people in power define what the protestors are saying, we must let those protestors speak for themselves. The Republicans will have their opportunity to respond, but they should not be allowed to frame both sides of the argument.

The Public Critique: The Republican Party, which already has a terrible track record on issues that directly affect women, has placed a famously misogynistic and abusive man in the Oval Office.

The Trump/GOP Response: Democrats are not nearly as critical of Harvey Weinstein as they are of Donald Trump.

In this case, Republicans are relying on the power of the tu quoque fallacy - "you do it too." The goal of this tactic is to shift the focus away from all of the claims that Donald Trump sexually assaulted women, to obfuscate the similarities between Trump and Harvey Weinstein (whom Trump has known "for a long time"), and to instead focus purely on Weinstein's egregious behavior. In so doing, GOP apologists want to drown out the President's own claims that he intentionally barged in to ogle naked women in their dressing rooms, and used his "celebrity" status to sexually assault women.

Theoretically, Trump's behavior should be completely unacceptable to the party of "family values." In fact, regardless of political party, Donald Trump's comments and behavior toward women are patently indefensible, so the GOP does not try to defend them. Instead, their only recourse is to, again, flip the narrative. The real issue, they claim, is the hypocrisy of Democrats in failing to criticize Harvey Weinstein.

Certainly, if Democrats are being hypocritical on this issue, it is a problem. That does not seem to be the case, but - if true - it would be a legitimate critique. That critique, however, does nothing to address the much larger problem of someone who apparently shares all of Harvey Weinstein's character flaws and is the leader of the free world. Nor does it address the Trump administration's refusal to protect victims of sexual assault, and their aggressive moves to turn back the clock on reproductive freedom and LGBT rights.

The Republican attempts to deflect from their failures is easily resolved by the GOP holding themselves to the same standard that they want to set for Trump's critics. If it is never acceptable to accept the leadership of, or money from, a person of low character who lies, abuses their power, and assaults people, then they should have already invoked Article 25 of the Constitution.

The most disturbing observation about the deceptive strategies above is that they work. A significant portion of the electorate is echoing the Trump team talking points, shifting the conversation away from the real issues and undermining the credibility of fact-based critiques. Whether the topic is what constitutes a credible news source, how to treat the protests of those who critique the President and his policies, or the character of the President himself, the President and his political party should not be the only ones allowed to establish the vocabulary and boundaries of the discussion.

Letting the government frame the debate, and only moving that debate forward through government-sanctioned media outlets, are the hallmarks of a totalitarian state. Consequently, it is essential to the vitality of our democracy that Trump and his defenders be called out every time they attempt to subvert the facts with their fallacious rhetorical strategies. Pounding on the table and yelling make for excellent reality television, but evidence and the law should set the standard for our political discourse.