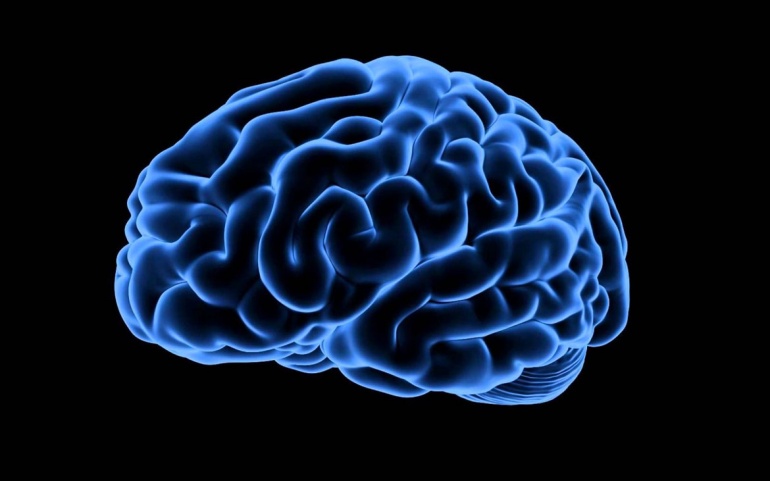 In a brilliant article written for Vox.com by David Roberts, we are introduced to what the author calls an “epistemic crisis” that has changed the very nature of knowing itself, at least for many Americans:

Epistemology is the study of knowledge, and of the rationality of belief.  Some things we think, some things we believe, and some things we know – and there’s a difference between these distinctions that can be studied.  Roberts is arguing that our understanding of what we know is being fundamentally changed and perverted by forces on the right that decided long ago that tricking us is more effective than persuading us.  For evidence of this, we need to look no further than the mountain of lies told daily by the present administration, the sheer audacity of these lies, and how the lies are immediately picked up and repeated by right wing outlets all over the country.  Ten minutes later, unicorns are real, the sky is purple, and liberals are hiding in the bushes waiting for the opportunity to steal our guns and turn our children gay.  It would be comical if it wasn’t the accepted truth for about a third of the US population.

In the past, there have always been a number of sources of information that have been seen as reliable.  While none are perfect, and absolute truth is a wiggly concept, certain entities have a long history of providing information to the public in deliberate and responsible ways.  For example, our free press has always been evidence of our greatness as a nation; after all, the preamble to the industry’s code of ethics states that “public enlightenment is the forerunner of justice and the foundation of democracy.” It’s a noble goal, and pursuing it sometimes means speaking truth to power.  Sometimes, power doesn’t like that very much: 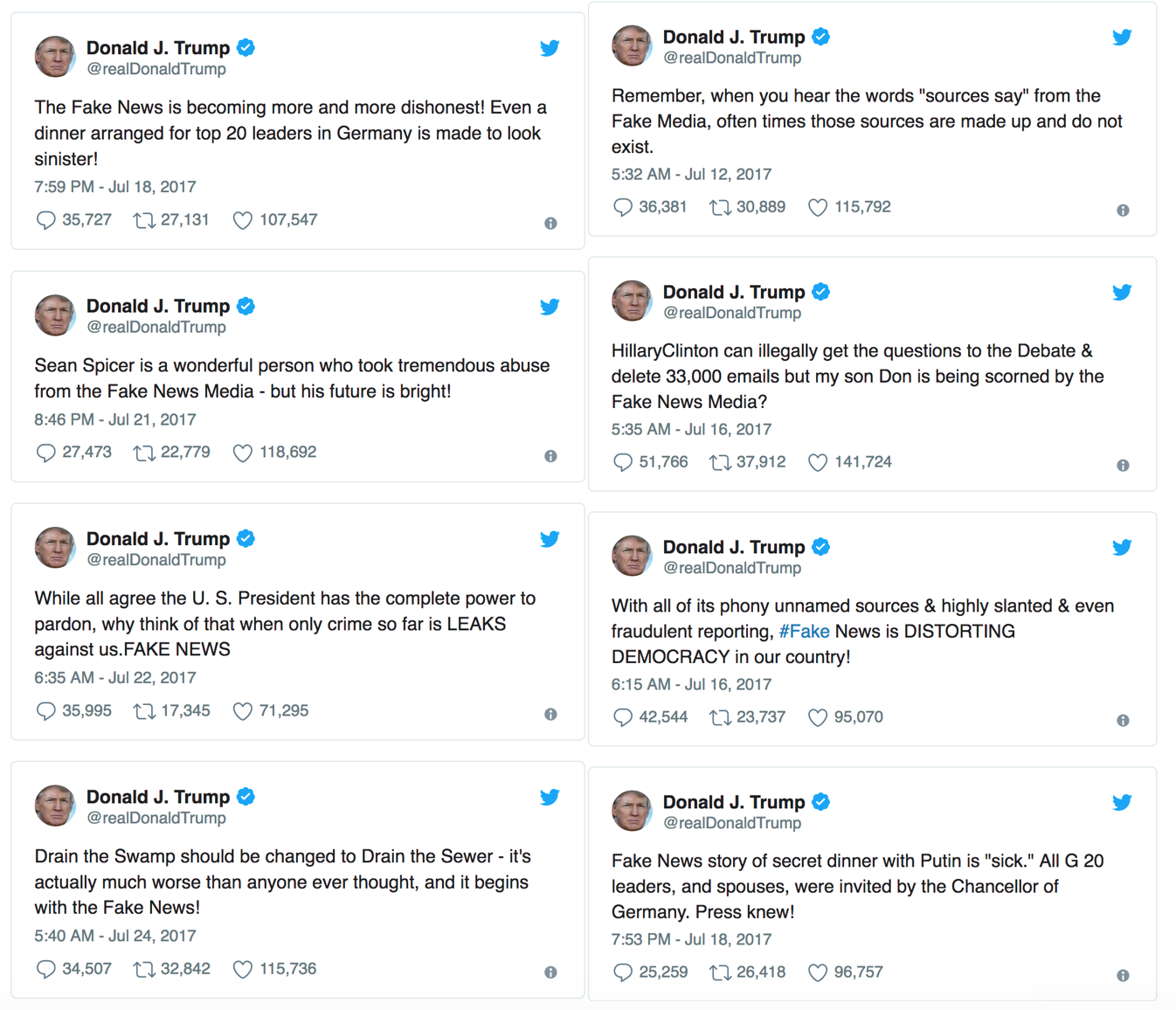 It’s worth noting that the selection above was taken from a 12-day period in July.  Just 12 days.  There are hundreds of examples of these kinds of references to our free press as a fake, as a fraud, and even as the enemy of the American people.  And while sources like CNN, the New York Times, and the Washington Post are attacked as #fakenews on a daily basis, right wing entities that deny any connection to actual journalism are praised by the White House as solid sources of the right kind of information.  The examples below come from Breitbart, Fox News, and Infowars, all media entities regularly praised by the current administration.  Also, this is only a small sample.  I could go on for days without running out of sheer lunacy to share. 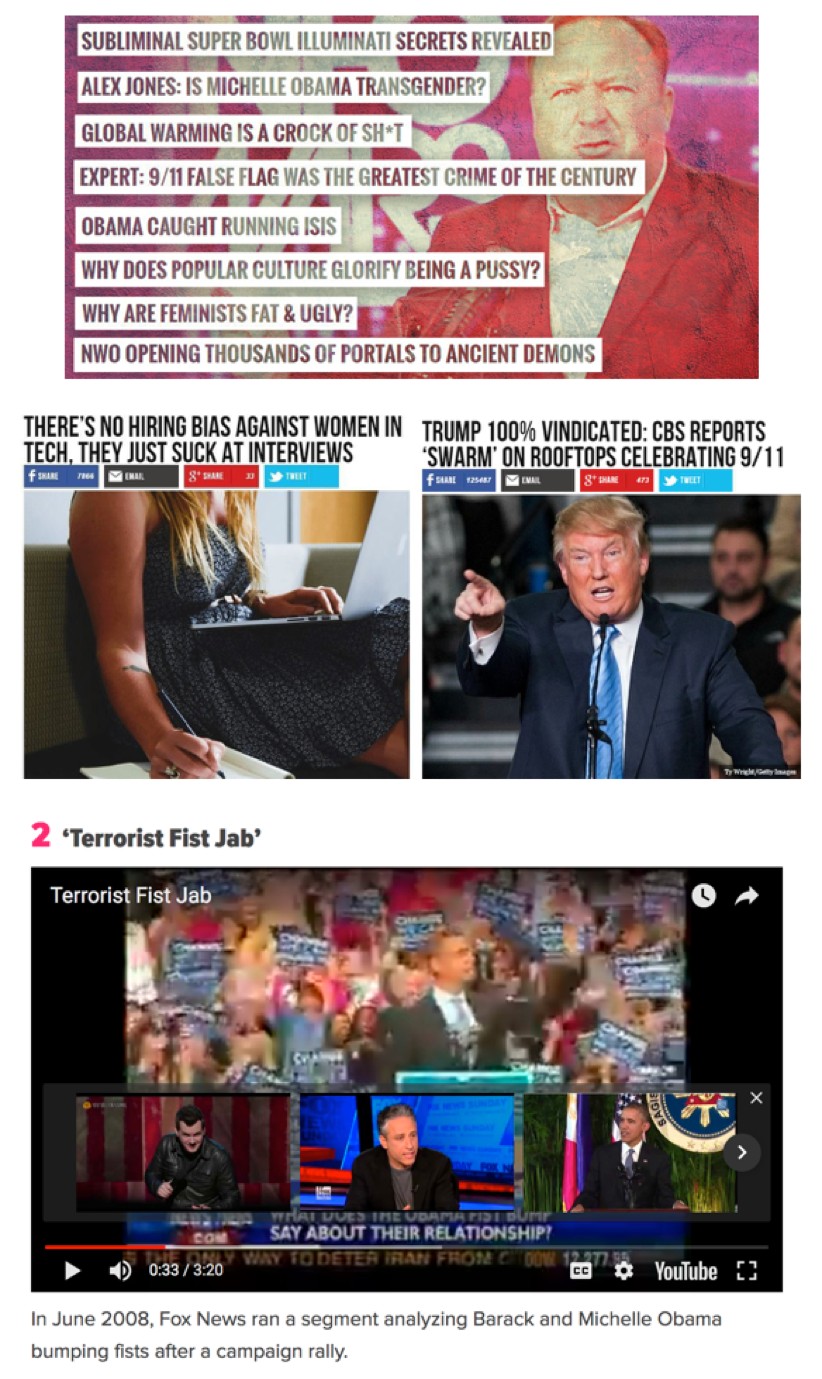 It is also worth noting that the network that claims 9/11 was a false flag operation (InfoWars) has a White House press credential, and the Executive Chairman of Breitbart currently has the ear of the President of the United States, and spent several months as a chief advisor on policy.  This is insanity the likes of which we have never experienced in American public discourse, but here we are.

Similar attacks have been made against academia, science, and government as we used to know it.  All are experiencing, in their own ways, a dismantling at the hands of the current administration and the power structure behind it.  And the replacement for each is the same right wing media mashup that is not only beholden to partisan interests, but also unburdened by any allegiance to truth, or any pretense that truth is even being sought.  Instead, truth is being manufactured, and facts that had been discovered, tested, and applied for generations are now being replaced with alternative facts that have no use beyond their ability to elevate a president to the role of autocrat.

Climate change is a myth, so don’t trust scientists.  The fake news media works for the democrats, so don’t believe them.  Academics are all leftist globalists (whatever that means) so hate them.  It’s all a big lie. The Earth is flat.   It’s a conspiracy.  They’re trying to take away your guns, and your freedom, and your president.  Deny everything, shout it down, and trust in your Dear Leader.

This is how we know things in the Trump era.

It brings to mind a lecture from my undergraduate days.  We were talking about truth, and about God.  The question was “Is truth separate from God?  Does He simply tell us what truth is, like a reporter would, or does He in fact create truth?”  I didn’t know then, and I don’t now, but one thing is for certain:  Trump and his right wing media backers are trying like hell to become the creators of our truth, and succeeding in this endeavor is the only thing that’s going to keep them from going to prison.

Enter Robert Mueller, carrying a briefcase full of indictments and a stack of intelligence evidence taller than even the gaudiest Trump Tower.  His case is made.  Everyone knows it.  Congress knows it.  Trump knows it, and there’s no getting out of it … unless he can convince the entire country that down is up, and that the truth is what he says it is, and nothing else.  He needs us to reject the truth presented by Robert Mueller and his investigation, and replace it with the truth he gives us, one in which he is not only blameless for the attack that placed him in his office, but also in which he has a very good brain, the best words, and a tax plan so freakin’ awesome that everyone is going to be rich a year from now.  It’s bullshit, but it’s consistent bullshit, shoveled by a dedicated contingent of Russian bots and Alt-Right, goose-stepping SS wannabes with keyboards.  And for about one in three of us, this bullshit is actually working.

If the case is weak, attack the case.  If the case is strong, attack the accuser.  If the case is impenetrable, and the accuser unimpeachable … then, attack truth itself.  This is the simplest way to explain what we’re going through right now.  And if Trump succeeds in his assault on the very nature of knowledge itself – if we reject the existence of objective truth and replace it with Trumpkin truth – well, we may never really know anything ever again.

Brett Pransky is your standard Midwestern English professor, minus the tweed jacket, the bushy beard, and the pipe. When he’s not using his red pen to combat the evils of the comma splice, Brett can be found at his desk, fighting larger injustices and proving to as many people as he can reach that the essay is still the most powerful form of argument in American public discourse. Brett holds degrees in English, Philosophy, Rhetoric, and Business, and while he is terribly uncomfortable talking about himself in the third person, he’s not going to let this keep him from showing everyone that the best way to change the world is to throw clever sentences at it.  Brett can be found on Twitter @BrettPransky.
Tags: