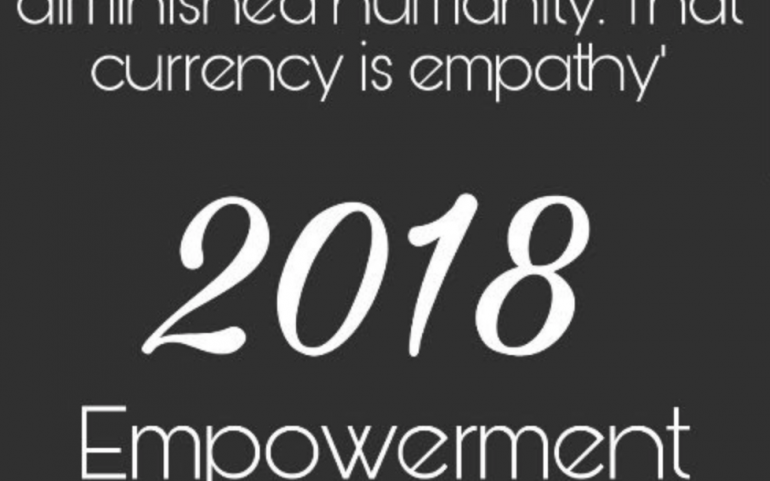 In the last few weeks, the president of the United States, has referred to Americans of African-Ancestry as unintelligent, unwitting, animals, who originate from a blood-thirty, crap-hole continent of farmer-killers & land-stealers (project much?)!

The 'no-bias here' talking point is that 'black' unemployment is at an all time low, so how could any presidential comments be deemed as offensive or insulting? Well, three things about that line of BS:

(1) A new presidential economy officially kicks off 6 months after the fiscal year begins. The last fiscal year started on October 1st, 2017, so April fool's day 2018 began the t-conomy. Objectively speaking, President Obama's 15.2 million jobs created, and the legislative legacy he left behind, are 80% responsible for what we see now!

(2) I'm not sure why folks think that a job is a 'shut up & play ball' happy pill [oh wait], that inoculates people from minimization & dehumanization. As #TakeAKnee (a show of support for equality & justice) illustrates, no amount of $$ can buy back one's dignity from diminished humanity! That currency is #empathy [hearing what people are feeling & needing, and verbalizing their feelings & needs]

(3) This president believes in eugenics and that his genes, inherently, are dominant over the genes of other tribes. That subconscious energy is picked up in multiple ways in comparison to President Obama, whose 'shackles & grief to commander-in-chief' energy, was unifying & aspirational [whether you decided to tune-in or willingly chose to tune-out]

So yah, this presidents group attacks ARE offensive, insulting (& YES, violent). 'But how can words be violent?' some might ask. Well, ya know the Gandhian quote, 'be the change you wish to see in the world'? A few years ago I learned of a tool that can literally CHANGE THE WORLD! It's called 'nonviolent communication'

It's a way of listening, thinking & speaking, that takes judgment out of communication (& therefore out of conversation). The litmus test for verbal-violence (or #ViolentSpeak) is: words & phrases that minimize, dehumanize or wrongness imply! And if you're wondering about the importance of bringing this into light, here's THE WHY:

...for the same reason we filter out poisons from our drinking water (*ahem Flint, Michigan*). To protect ourselves from harm, and to be nourished by what we take in!

Two of our most common human needs are to be protected from harm and to be nourished by what we take in. The way that most of us have been trained to talk to each other, however, meets neither one of these common human needs. The 1st step of the three step process of speaking nonviolently (aka nonviolent communication), is to speak in objective observations instead of subjective judgments. Physically, an objective observation would be that my skin is brown, and my race is human. But most folks who say they advocate for equality & justice, are spewing the same poison (subjective judgments) as those who don't advocate for equality & justice (with words & phrases that reinforce the violent thought that we are separate colors & separate races!)

When astronomers back in Ptolemy's day thought that the planets revolved around the earth (geo-centric), they totally thought they had the BEST & GREATEST calendar ever (nothing like anyone had ever seen, in the history of the universe), but they couldn't quite make it work. So along comes Galileo who's like, 'dude! Your words are off. Your observations are jenk!' His objective (vs political) observation was that the planets revolved around the sun (helio-centric), and voila the calendar worked.

So why is it violent to call someone 'white'? Because even though it works for some who are empowered by its privilege (group-privilege is where things work to the benefit of one group in comparison to another), for the majority of the planets inhabitants it's a geo-centric, subjective judgment that robs team-humanity of its intrinsic dignity! Feel me?

...did I mention that speech can be violent, and that violent speech is not protected speech (check-out the exceptions to the 1st amendment, including obscene words, fighting words & subversive words)

Do me a favor! Take a couple of fucking seconds (surprise you?

good, you're hearing me) out of your life to shift from linguistic-larceny to verbal-dignity?!? And I totally get it. If we're not separate races or separate colors, then what has all this toxically painful BS been about? Well, people in pain create painful separation, and painful separation prevents loving connection. So in some sense, much of the death, destruction & mayhem, has been a Shakespearean freudian-couch, tragically playing out.

But now that you know what the poison looks like, we can heal any energetic wounds that still exist, and start dealing with unacknowledged parts of our pain & humanness. Are you game? I can't wait until Alyssa tweets me about Americans of African & Caucasian-Ancestry being shades of brown

May you be protected from harm, and nourished by what you take in, today