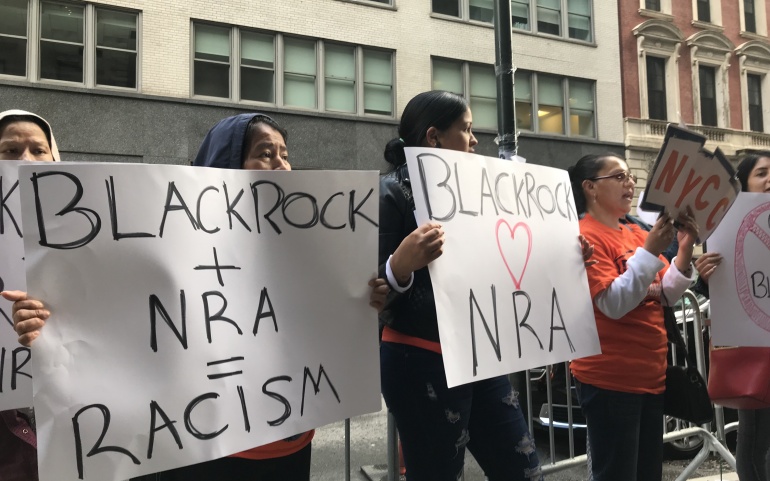 Sturm, Ruger made the AR-556 assault weapon which killed 26 people in the Sutherland Springs church massacre and has among the most aggressive stances against gun violence prevention of any weapons company. It was recently bound by shareholder action to report on the violence committed with the guns it makes, to which Sturm, Ruger President and Board Member Chris Killoy replied “what the proposal does not and cannot do is to force us to change our business.”

Sturm, Ruger’s board includes Sandra Froman, a past president of the NRA and current NRA Board Member. Froman formerly worked to promote the views of William Shockley, a physicist who perpetuated theories that whites are genetically superior to other races.

BlackRock voted to confirm the entire board, made up of Froman, Killoy and seven other exclusively white men.

This blatant disregard for shareholder will and basic humanity is emblematic of the gun and financial industries’ combined efforts to value profit over lives.

Communities of color, especially women of color, suffer disproportionately from gun violence. The “leadership” of Sturm, Ruger and the NRA shows not only a disregard for this racist outcome, but in fact has actively promoted theories which perpetuate it.

BlackRock and other financial institutions which own Sturm, Ruger are guilty of allowing this deadly racism and gross neglect to continue. If BlackRock wanted to show it valued lives over money - especially the lives of people of color - it would have done so last week and voted to replace  the Sturm, Ruger board. It did not.

The American financial industry is killing Americans. We demand better.