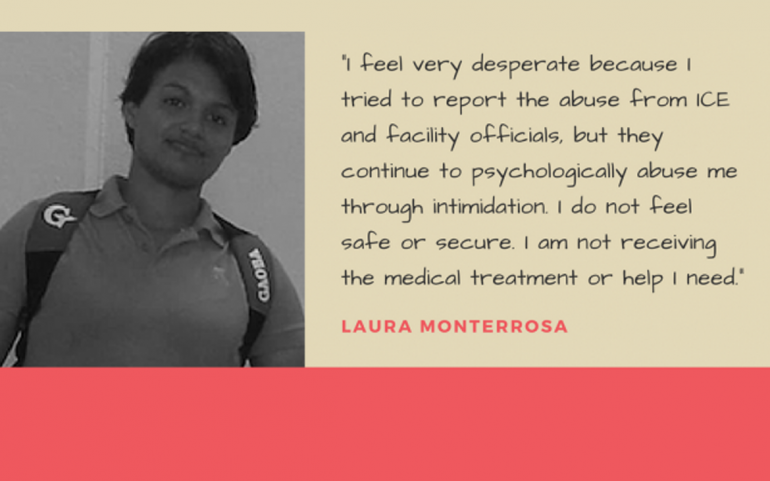 #LauraMonterrosa spoke out about sexual abuse and ICE put her in solitary confinement to cover up what happened. Take action right now by signing the petition and making a call! #EndDetention #MeToo #EllaHabla

On Wednesday, Feb. 14, a group of about 50 people gathered outside the T. Don Hutto Residential Center in Taylor, Texas, to protest the isolation of one Laura Monterrosa, a young asylum seeker who has been convicted of no crimes. Though her solitary confinement was temporary, her story is far from over, and it is part of a larger pattern of abuse and silencing to which activists are hoping to draw attention.

For years, a dark cloud of half-silenced horror stories has obscured the air around the Hutto Residential Center– a name that obscures its reality as a detention facility for immigrant women attempting to apply for asylum. Stories of sexual abuse and harassment, as well as retaliation against detainees who dare to speak out against their abusers, abound in immigrant detention facilities across the country, and Hutto is no exception.

“Women – we do not even know how many – have now suffered the trauma of sexual assault because of the failure of ICE leadership to respect the human dignity of those in its custody and implement meaningful reform,” said Mary Meg McCarthy, executive director of Heartland Alliance’s National Immigrant Justice Center, in a 2010 statement calling on the Department of Homeland Security to institute reforms in its detention system.

But each of the women who find themselves at Hutto after fleeing their homes and leaving families behind arrive with their own stories of trauma and horror, seeking a security they can only find in another country. Imagine escaping a family life of sexual and physical abuse from childhood, and death threats from gangs because of your sexuality, only to encounter abuse yet again in the first place that is intended to keep you safe.

Such is the story of Monterrosa, 23, who is currently detained at Hutto appealing the denial of her asylum claim. Monterrosa fled El Salvador last summer after years of abuse exacerbated by poverty and directed at her because of her queer identity – including a grandmother who forced her to have sex with men for money at the age of 12, and an uncle who beat and raped her to “correct” her sexuality, according to an interview she gave to The Outline published in January. She left after gangs threatened her life, hoping to find safety in the United States, in a place where she could be herself. But once she was apprehended after crossing the border, and then detained at Hutto last summer, she encountered a female guard who began to take advantage of her authority, and Monterrosa’s vulnerable position, to grope, threaten, and abuse her for months.

“I told her I was going to talk to the captain,” Monterrosa said in a letter she sent to Grassroots Leadership, an Austin-based nonprofit focused on prison reform, in early November 2017, “but she laughed with a sarcastic laugh and said, ‘do you think that he will believe you, please, they never will.’”

Hutto is run by a for-profit company, CoreCivic (formerly Corrections Corporation of America), which is required by its contract with Immigration and Customs Enforcement (ICE) to fill a minimum of 461 beds in its facility, at a rate of $95.20 per person per day. Women held at Hutto are “administrative detainees” – not charged with any crime, but simply held to “assure their presence throughout the administrative hearing process,” according to the contract. Opened in 2006 as a family detention center, Hutto was changed to a female-only detention center in 2009 following lawsuits and media coverage surrounding inhumane conditions for minors, as well as a sexual assault case in 2007. In 2010, a CoreCivic guard was arrested for sexually assaulting eight women he was transporting from Hutto to another facility.

“DHS should be investigating this,” said Ohio immigration attorney David Leopold. “The Don Hutto Detention Center in Texas has a record of abuse of female detainees.”

In April 2017, the national watchdog group CIVIC (Community Initiatives for Visiting Immigrants in Confinement) published a report finding that between January 2010 and July 2016, the Department of Homeland Security received a total of 14,693 complaints of sexual abuse or harassment against ICE in particular – more than any other DHS agency – and conducted a total of 173 investigations.  “The data is particularly disturbing given that rape and sexual assault are known to be highly underreported in immigration detention facilities due to fears of retaliation, social isolation, language barriers, and the knowledge that allegations are not seriously investigated,” said Rebecca Merton, Independent Monitor and Program Coordinator of CIVIC’s National Visitation Network. A report by DHS’ Office of the Inspector General released in December 2017, although it did not investigate Hutto in particular, confirmed many of the circumstances that make reporting sexual assault so difficult – that in some cases, staff have deterred detainees from reporting grievances, treated them disrespectfully, failed to provide adequate language services, and misused the practice of “segregation” or isolating a detainee from others.

Like so many other victims, Monterrosa had to deal with many of these factors – her letter indicates she witnessed another woman being abused and then moved to another facility after reporting the crime. When Monterrosa first reported her own abuse in early November, she said in an affidavit that her interview with ICE and local police officers felt more like an interrogation, and her interpreter seemed unable to understand or translate her properly, as reported by the nonprofit online outlet Rewire that month. ICE initially closed the investigation, saying the claims were unsubstantiated, but the FBI intervened later in December to investigate itself. All the while, Monterrosa reported, her movements were restricted, and her alleged abuser was still employed there; two other women, including the one she mentioned in her letter, came forward with accusations of abuse as well. In January, Monterrosa reportedly attempted to take her own life with pills she had been given for stomach pain.

“I feel very desperate because I tried to report the abuse from Ice and facility officials, but they continue to psychologically abuse me through intimidation,” she said in a ands-immigration-guard-texas-attempts-suicide">statement released by Grassroots Leadership that month. “I do not feel safe or secure. I am not receiving the medical treatment or help I need.”

Grassroots has been supporting Monterrosa with their physical presence at Hutto as well as spreading the word about her case, which has now been covered by The Guardian, Democracy Now!, and local outlets like SpectrumNews in Austin. They are hopeful that with more media attention and action demanded on the part of the government, enough light can be shed to disperse this dark cloud of abuse of vulnerable immigrants.

"We know that there are thousands of men and women who are sexually abused in detention every single year and that usually, that results in less than 1 percent conviction rate and investigation rate for all of the cases,” said Claudia Munoz, Grassroots’ immigration programs director. “So for us, it's not just about Laura, it's about the larger systemic issue of sexual abuse and abuse of power that happens inside of detention centers.”

On Tuesday, February 20, Austin City Councilmember Greg Cesar will visit with Monterrosa at Hutto after advocates testified about her case at the Williamson County Commissioners Court the same morning.

"Ms. Monterrosa must be released immediately. In Austin, we strive to welcome refugees and asylum seekers, and our nonprofit community has offered to take care of Ms. Monterrosa as part of our family,” Casar said in a statement released by Grassroots. “No one should be incarcerated in a private prison. Even worse, Ms. Monterrosa is being detained in this for-profit prison that is being investigated by the FBI because of accusations that guards have sexually abused her and other incarcerated women."

As Grassroots and other community members and leaders continue to work for Monterrosa’s safety and release, you can also help by sharing this sample tweet:

#LauraMonterrosa spoke out about sexual abuse and ICE put her in solitary confinement to cover up what happened. Take action right now by signing the petition and making a call! 📞 http://ht.ly/mdeP30ip3M4  #EndDetention #MeToo #EllaHabla

You can also follow @IndvsbleTXLege for a sample script and number to call the Taylor police department.

Ayesha Ahmad is an entrepreneur and mom of two school-age boys living in Maryland. A graduate of the University of Maryland’s M.A. program in journalism and former local news city reporter, she now runs her business, Ayesha Ahmad Photography, out of her home, while volunteering as photographer and as part of the PR team at the Muslim Community Center of Silver Spring, one of the area’s oldest Muslim faith-based organizations. Follow her work at @ayeshaahmadphoto on Instagram or on Twitter at @ayeshasahmad