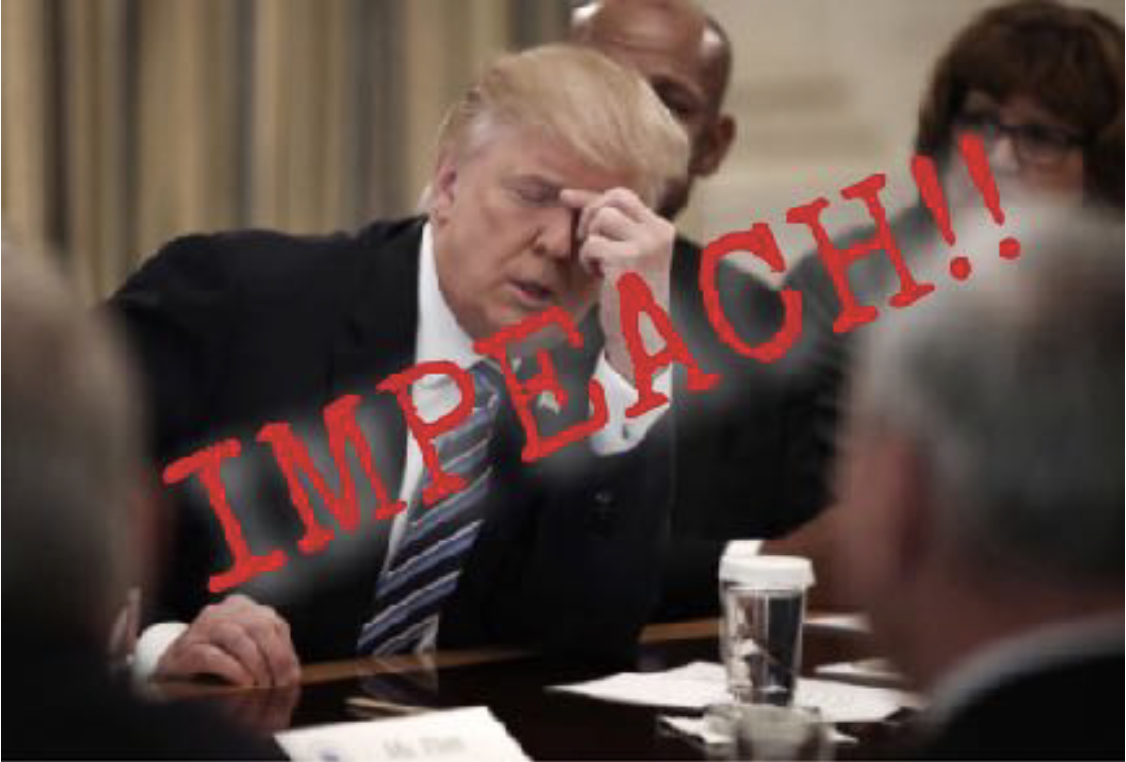 Day after day, we are bombarded by reports of more and more ties between Russia and Donald Trump and his cabal. It seems that EVERYONE on Team Trump "coincidentally" has ties to Russia, whether it's Trump "consigliere" Michael Cohen's negotiations for Trump Tower Moscow during the campaign, Paul Manafort's spider web of connections with Kremlin-linked oligarchs and mobsters, Donald Trump, Jr.'s meeting with the Kremlin-connected lawyer on "adoptions," Jared Kushner's secret backchannel to Russia and previously undisclosed meetings with former Russian Ambassador Kislyak and the head of a sanctioned Russian bank, Ivanka Trump's visit to Moscow where she reportedly sat in Putin's personal chair inside the Kremlin, or even Trump himself, who's had multiple, previously undisclosed business deals with Russians.

It begs the question, who on Team Trump doesn't have close ties with the Kremlin?

No complaints about the TrumpRussia media blitz, but truth be told, the real question on all of our minds is, WHEN WILL DONALD TRUMP BE IMPEACHED?

There is one man who holds the power to initiate impeachment proceedings against Donald Trump. His name is Bob. But he's not the "Bob" you likely think he is. Although Robert "Bob" Mueller, III, is playing a leading role in the TrumpRussia investigation, he's not "This Bob".

"This Bob" is Bob Goodlatte, a Republican Congressman, who represents Virginia's 6th Congressional District. "This Bob" also happens to be the Chairman of the House Judiciary Committee.

Why is Bob Goodlatte so important to impeaching Donald Trump?

A quick review of history will help explain why "This Bob" plays such a critical role in Trump's impeachment.
Article II, Section 4 of the Constitution states that the President "shall be removed from office on Impeachment for, and Conviction of, Treason, Bribery, or other high Crimes and Misdemeanors."

Oh? Now, this is getting juicy already! 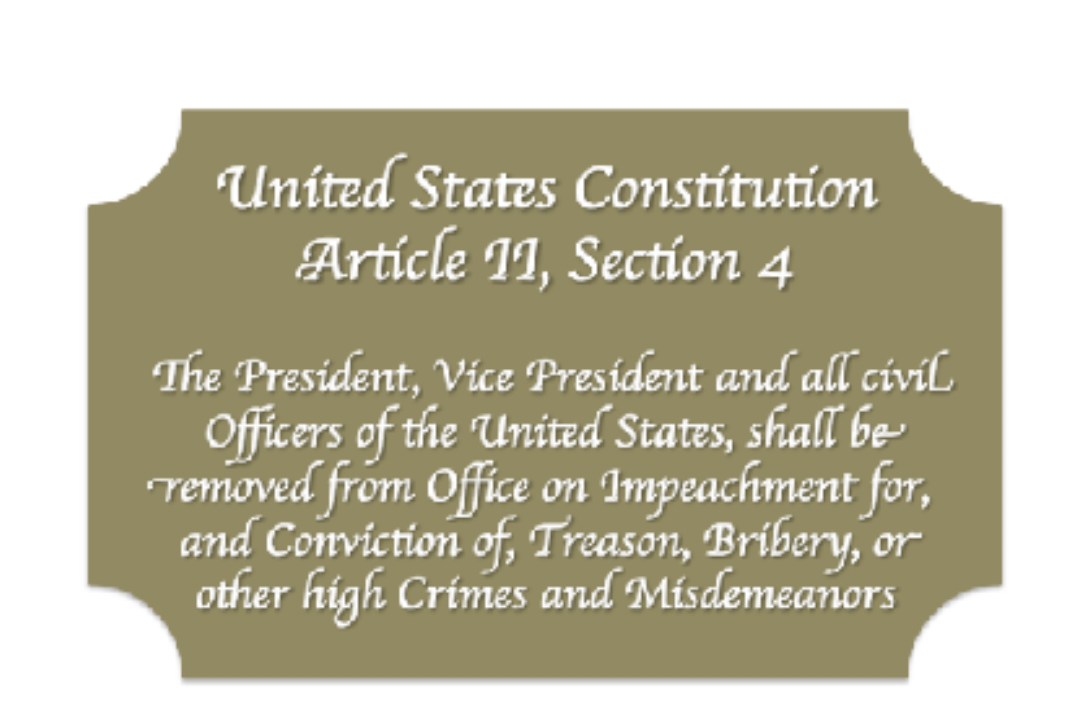 "Treason" and "bribery" are well defined, whereas "other high Crimes and Misdemeanors" can encompass a whole host of misdeeds, as evidenced by prior impeachment proceedings against past presidents.

Thus far, three presidents have been subjected to at least a part of the impeachment process: Andrew Johnson in 1868, Richard "Tricky Dick" Nixon in 1974, and Bill Clinton in 1998-1999. Presidents Johnson and Clinton were both impeached by the House, but acquitted by the Senate, whereas "Tricky Dick" resigned to avoid near-certain impeachment and conviction.

Andrew Johnson faced multiple charges stemming from his alleged violation of the "Tenure of Office Act," passed by Congress the previous year to protect the Secretary of War, Edwin McMasters Stanton, whom Johnson subsequently fired. "Tricky Dick" faced a host of charges, including Obstruction of Justice, Abuse of Power, Contempt of Congress, Cambodia bombing, and Failure to pay taxes. Bill Clinton was charged with Obstruction of Justice, Abuse of Power, and two counts of Perjury.

Obstruction of Justice and Abuse of Power, you say?

Trump's firing of former FBI Director, James Comey, followed by Trump's own admission on national television that he fired Comey because of "this Russia thing," along with the release of Donald Trump, Jr's emails revealing details of a previously undisclosed meeting in Trump Tower with a Kremlin-connected lawyer, a "former" Russian spy, plus other assorted characters, provided sufficient evidence for one Democratic Congressman, Rep. Brad Sherman, who, on July 12, filed the first resolution to impeach Donald Trump for obstructing justice by "threatening, and then terminating" Comey. A recently revealed letter, drafted by Trump and his aide, Stephen Miller, may provide further evidence supporting this Obstruction of Justice charge against Trump. In his draft letter, Trump reportedly revealed such a candid view of his rationale for firing Comey that White House counsel, Don McGahn, II, called it legally "problematic," and
"blocked" Trump from sending this version to Comey. Special Counsel Mueller now has a copy of Trump's draft letter. House Intelligence Committee Ranking Member, Rep. Adam Schiff, says it may be "past time" to subpoena the White House to obtain Trump's letter.

Although it's certainly good news that someone is working to impeach Trump, before we get too excited, here's a sobering thought: not a single president in history has ever been impeached, convicted, and removed from office, although "Tricky Dick" almost certainly would have been impeached and convicted, had he not resigned in disgrace beforehand.

Then again, our country has never had a "president" so egregiously awful and corrupt as Donald Trump.

How is a President Impeached?
Many Americans say (or scream) that "impeachment" is what's needed to rid our nation of Trump, and although true, it's only one part of the process. In fact, to remove Trump from office, he must both be "impeached" by the House of Representatives and then "convicted" by the Senate. Impeachment requires a simple majority vote by the House, whereas conviction requires a 2/3 vote in the Senate.

To kick off the process, any Member of the House may introduce an "Impeachment Resolution" for Treason, Bribery, or other high Crimes and Misdemeanors. The good news is that Rep. Sherman got the ball rolling on July 12, and Trump continues generate additional evidence against himself seemingly daily, between his tweets and unhinged press conferences. The bad news is that now, things get more complicated.

After being filed, an Impeachment Resolution is then referred to the House Judiciary Committee. At it's discretion (and this is VERY important when we consider Trump's potential impeachment), the House Judiciary Committee investigates potential charges, conducts hearings, and writes formal Articles of Impeachment, with each "Article" comprising a different charge, such as Obstruction of Justice or Abuse of Power.

This is why "This Bob" Goodlatte is so important.

In Congress, a Member of the majority party serves as "Chairman" of each committee, and the minority party's senior Member on the committee serves as "Ranking Member". However, only the Chairman has full power and authority over his or her committee's actions, or in "This Bob" Goodlatte's case, inaction. 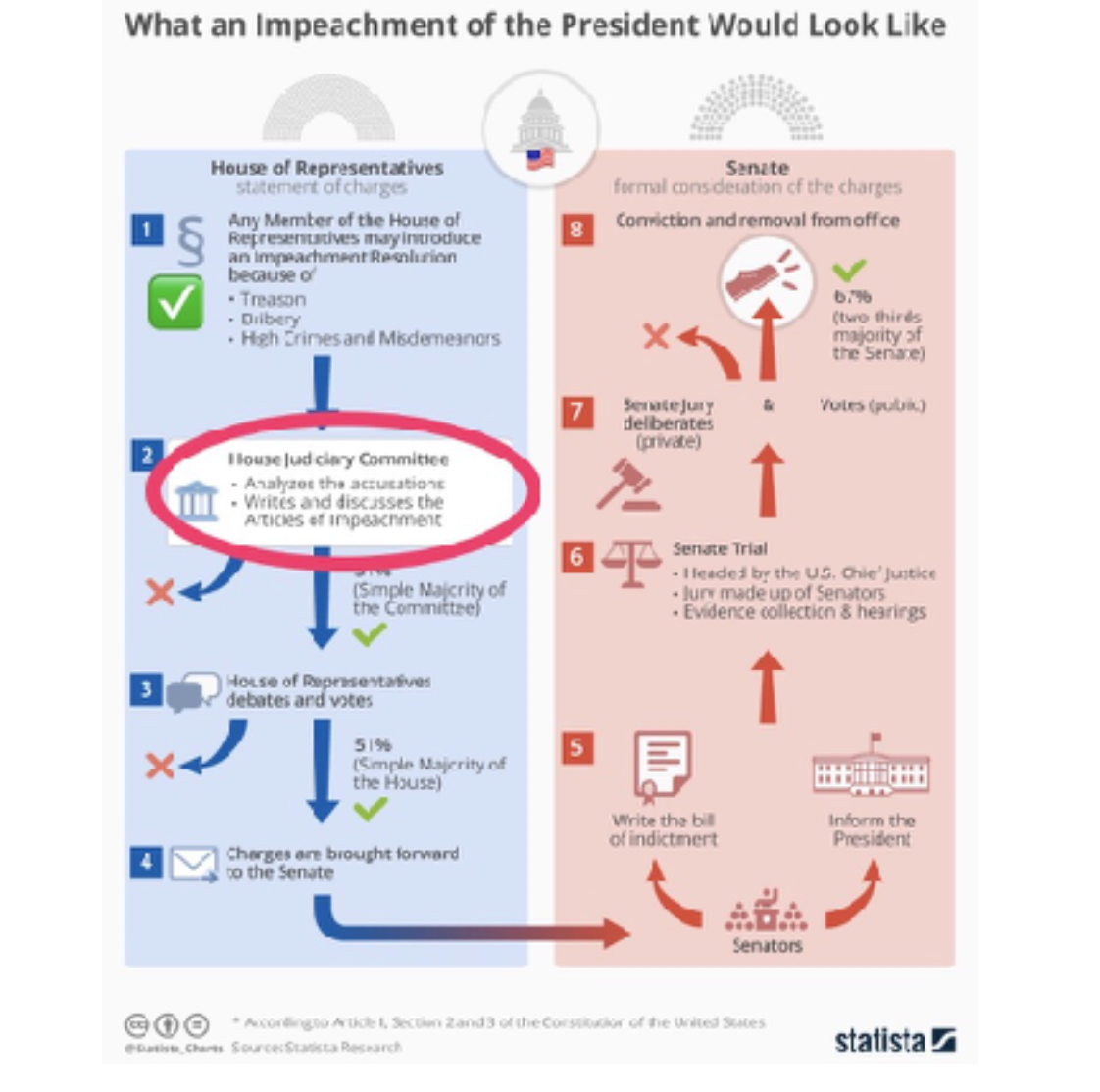 An impeachment resolution against Trump for Obstruction of Justice was filed on July 12, but since then, Rep. Bob Goodlatte, Chairman of the House Judiciary Committee, has taken no action. Figure credit: Statista

And what has "This Bob'" Goodlatte's House Judiciary Committee done?

After Rep. Sherman's impeachment resolution was filed on July 12, the Senate Judiciary, Senate Intelligence and House Intelligence Committees have continued their investigations and even worked through the summer recess, performing such activities as:

Bob Goodlatte, on the other hand, has obstructed all efforts for his Committee to investigate the firing of Comey or anything else related to TrumpRussia. Instead, "This Bob's" House Judiciary Committee decided to investigate...HILLARY CLINTON'S EMAILS.

Donald Trump, the sitting president of the U.S., fired former FBI Director Comey, the person who was investigating him, his family, and his campaign, for allegedly colluding with Russia to influence our election, and then, Trump admitted to firing Comey over "this Russia thing" on national TV.

Yet Rep. Not-So-Goodlatte refuses to hold a single hearing on the most important issue in our country. Judiciary Committee Member, Democrat Rep. Jerrold Nadler, said that Goodlatte has "done zero - absolutely zero - as Chairman to look into these things." Another Democrat on the House panel, Rep. Luis Gutierrez, praised Republican Chairman Grassley's work saying, "We've got to give Grassley and the Senate credit. They are not over there denying the reality of what is going on." That's rather telling, given how rarely elected officials praise a member of the other party these days!

Our Founders intended for impeachment of a president to be difficult to avoid partisan politics overcoming the will of the American people. In Trump's case, both chambers of Congress are controlled by Republicans, ostensibly the same party as Trump. And yet, the Republican-led House and Senate Intelligence Committees both launched investigations, as did the Senate Judiciary Committee.

Where's the House Judiciary Committee in all of this? Nowhere.

Not-So-Goodlatte said that he didn't see any reason for his panel to use "taxpayer dollars to investigate the Trump campaign's connections - or lack thereof - to the Russian government," and added, "Until Mr. Mueller's investigation is complete, it is redundant for the House of Representatives to engage in fact-gathering on many of the same issues he is investigating."

An impeachment resolution for obstruction of justice has been filed, and only the House Judiciary Committee can review, investigate, and take further action. HOW WOULD THIS BE REDUNDANT?

Trump's own lawyers appear concerned that their client obstructed justice over Trump's firing of Comey, and substantial evidence already exists that Trump and his campaign coordinated with Russia to interfere in our election, and NOT-SO-GOODLATTE WANTS TO INVESTIGATE HILLARY'S EMAILS?!?

Seemingly, Not-So-Goodlatte is more concerned about party politics than preserving our democracy. It's far past time for "This Bob" Goodlatte to put Country over Party and immediately initiate a House Judiciary Committee investigation into Comey's firing, Obstruction of Justice, Trump and his campaign's alleged collusion with Russia, and any other charges resulting from additional impeachment resolutions that are near-certain to be filed.

So what's it going to be, Bob? Country or Party? Goodlatte or Not-So-Goodlatte?

PS: Want to make a difference? CALL Rep. Goodlatte, and tell him to initiate hearings IMMEDIATELY on the Obstruction of Justice impeachment resolution against Trump.