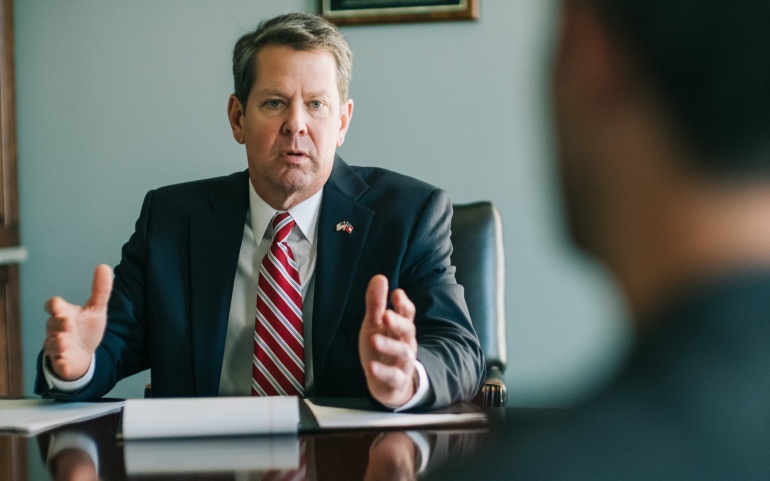 Georgia’s Secretary of State has implemented America’s least-secure elections, and voter data has been compromised multiple times during his tenure.

This has been a tough year for those of us who believe in the sanctity of American institutions. We’re tired of corruption and are growing impatient at the intentional degradation of norms from the Trump administration and Congressional GOP. Many across the political spectrum wish there was a mechanism for the people to impeach the president directly, as our Representatives are choosing partisanship over accountability.

The great state of Georgia has been contending with its own corruption, incompetence and negligence from Secretary of State Brian Kemp, whose actions have undermined voting systems, election security and democracy in general. The difference at the state level, however, is that there is a mechanism by which the people can expel an elected official. And in Georgia there is a robust effort underway. A non-partisan group called A Voice For All Georgia has started a recall petition. And the success or failure of this effort has implications for all Americans.

According to John Ziegler, leader of A Voice For All Georgia’s recall effort: “In Georgia, the Secretary of State is responsible for the administration of secure, accessible, and fair elections. This responsibility isn’t a suggestion – it’s the fundamental job description. As voters, we should expect our votes to count and our information to be handled with integrity.”

But Ziegler says that Kemp has done the opposite. Here is a list of his alleged infractions and examples of gross negligence (links embedded). Under Kemp’s tenure:

In a shocking and telling move last week, the Assistant Attorney General of the State of Georgia announced that the AG’s office would not defend Kemp or the State in the “wiped server” lawsuit filed on July 3.

This revelation only makes Ziegler more steadfast about the necessity of recall. “If this level of negligence were displayed by another elected official in a different position, it might make sense to just grit our teeth until his term was up. But given that our election system is in shambles, held together with duct tape and super glue, leaking voter data from every valve, we can’t in good conscience allow this man to oversee another major election. He has to be recalled so that somebody more competent, preferably somebody who has a passion for safeguarding democracy, can run our state’s 2018 election.”

Accountability for elected officials seems like a novel concept in this historical moment. Here, in Georgia, citizens have an opportunity to send a message: that overt torpedoing of democratic systems will not work. That ”We The People” can see corruption, call it out, and hold elected officials accountable. If the recall were successful, the message to other Secretaries of State across the country would also be clear: “Do your job. Run our elections with integrity. Or else.”

Call to Action: All Americans need to get behind this effort being undertaken by our fellow citizens in Georgia: post information about the recall on social media sites and tag anyone you know who lives in Georgia; share articles about Kemp’s malfeasance; call friends & family in Georgia and make sure they know what is happening. Making this a story of national significance will help the groundswell in Georgia.

But it’s ultimately up to Georgians to make sure the recall happens.

Before a recall election can take place, 778,677 Georgians must sign A Voice For All Georgia’s petition. Signatures need to be collected by December 15th. Qualified signers must be registered GA voters who were eligible to vote in the 2016 election. (Registered Georgia voters are a bit harder to come by than they used to be, since Kemp has enthusiastically overseen the purging of 1.2 million registered voters from the voter rolls since 2014.)

If enough Georgians sign the petition, Governor Nathan Deal would have 10 days to set a date for a special recall election, which would likely occur in late January to mid February, 2018. A Voice for All Georgia is seeking volunteers to help in the effort.

People may try to cast this effort as an act of partisanship. But, if a recall happens, Governor Deal (a Republican) would appoint a replacement (likely to be another Republican). Thus, partisanship isn’t the driver, says Ziegler. “Our supporters have beliefs and values from across the political spectrum, including Tea Party Republicans and constitutionalists. We have been invited to both Republican and Democratic events to obtain signatures. This recall effort is not about party. It’s driven by a love for democracy and a deep respect for all citizens’ voices in our noble state of Georgia. ”

According to Ziegler, no Secretary of State from either political party has ever failed so tremendously or overtly in their role of ensuring free, fair and secure elections. “Brian Kemp is a failure without precedent. Georgians must act.”

​And Americans everywhere need to support them.