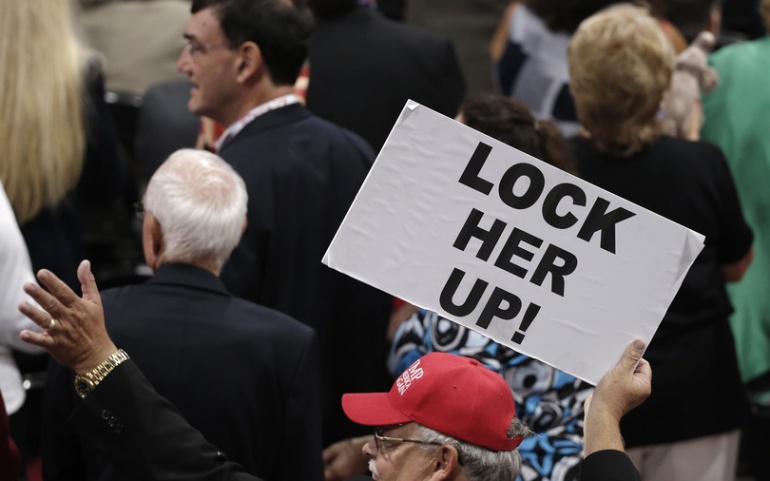 United States, home of the free. Where in the legal system Americans have the right of Due Process, where every American is innocent until proven guilty, except the Clintons. Why do conservatives, especially Trump supporters hate the Clinton family so much to the point that they don't even acknowledge their American rights?

The Clintons as a whole have done so much for America, examples President Bill Clinton balanced the budget, brought down crime, brought in higher incomes, 6 million jobs were created under his Presidency plus so much more. Hillary Clinton also has an amazing set of accomplishments.  As Senator of New York, one of her most important issues was the quality of life for Veterans and their families. She has introduced several pieces of legislation designed to improve healthcare and financial support for veterans and has sponsored a bill that would provide educational and financial opportunities for veterans of Iraq and Afghanistan. In 2007, Clinton and Virginia Sen. Jim Webb called for an investigation into whether the body armor issued to soldiers in Iraq was adequate. She played a huge role during 9/11.  Their daughter Chelsea also following in their footsteps with amazing accomplishments. And yet why do conservatives still hate the Clintons?

At one time myself when I used to be a conservative felt the same way, and no one including conservative pundits really looked into fact-checking the lies, and propaganda that was spread about the Clintons. Because if a person really fact-checked as I have done recently, they would know it's all fake news. I will list and debunk a few key issues that conservatives lied about the Clintons. In spite of all of President Clinton's accomplishments, he was accused of rape and of course, Republicans and conservatives made this scandal political even today, they don't let it go, yet they are the first to say innocent until proven guilty when one of their own has been accused.

Let's go to Hillary Clinton since the hatred from the conservative base is what I believe to be the reason that cost her the Presidential election, (if the election really was legit.) The investigation of Hillary's private server was one of the key talking points for many conservatives, and so many listened to conservative media and conspiracy theorist thinking what she did was illegal. The truth of the matter is, just like what the FBI said, it was careless but wasn't illegal. In fact, if you go outside conservative media, and read thoroughly the investigation reports, it was clear Hillary Clinton did not break the law. In fact, she asked for advice from several people on what she can do to make it easier for her to work, Colin Powell was one of them. Benghazi was another issue that conservatives held on too. The decision from Hillary Clinton not sending help to get the 4 Americans out still haunts her to this day, conservatives will not let it go. Here's the thing, leaders are human. They make mistakes, they fall just like any human being. Hillary Clinton made a choice which leaders do and she was investigated for 72 weeks by the GOP and the FBI with no EVIDENCE of any wrongdoing. I also find it appalling how Conservative media will exploit the survivors using their PTSD to lash out at Hillary and President Obama for their decision making on Benghazi. The hypocritical part, they are not holding Trump accountable to what happened in Niger under his leadership, almost very similar stories, but only Democrats are to blame, and Hillary has taken responsibility for it.

Hillary Clinton has done so much for America, and I find it appalling that the right will do all they can to silence her. She is an American citizen, former First lady and a former Secretary of State, she has same American rights as everyone else, innocent until proven guilty, and she has proven her innocence, she has the right of free speech, she can share her opinions as she sees fit, and she can encourage people to vote which is an American patriotic duty, so enough with the "lock her up" chants. Leave the Clintons alone.