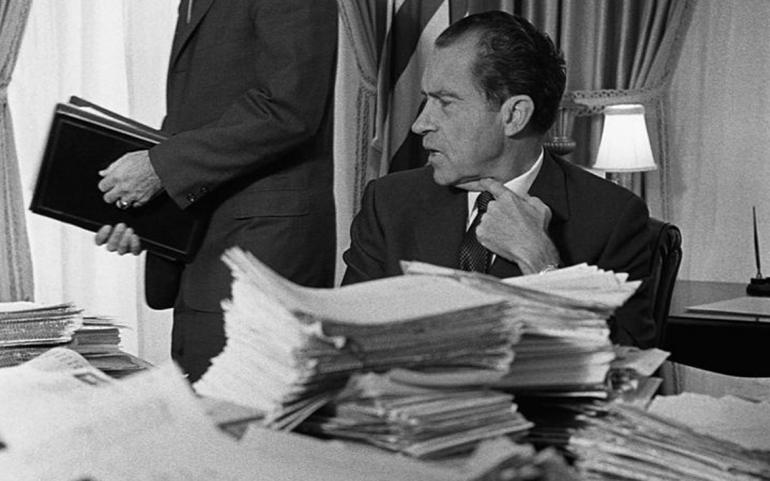 James Madison, at the constitutional convention:  “A President is impeachable if he attempts to subvert the Constitution.

I’ve recently been doing a bit of historical research into impeachment. Given our current circumstances with Trump, it did seem to be the logical course of action. As I was reading, I began to notice trends in certain things. Similarities to that situation and our own. It isn’t a carbon copy, that is for sure. However, there are enough similarities as to be noted.

Nixon’s troubles may have culminated in Watergate and the ensuing scandal but they by no means started there. They didn’t even start with his presidency, but rather his first attempts at gaining it against John F. Kennedy. History shows how that turned out. He blamed the media for slanting public opinion against him. Familiar words.

The next similarity came about when in 1970 the New Times published an article revealing a secret bombing campaign against Cambodia. Never can stay out of trouble, can they? This is when Nixon ordered the use of wiretaps to find the leaks among government employees. These proved unsuccessful with the release of the Pentagon Papers in the New York Times after which a special unit was created to prevent any more leaks. Again, focusing on the leaks and not the problem they revealed is a problem that is being faced even now.

The reelection campaign held more similarities in that it focused on the negative attributes of his opponents so much so that there was a special fund set up by his Attorney General John Mitchell just for that purpose. Smearing his opponents and causing a dip in their popularity right before the election was a tactic Nixon used. It also won him reelection. Sounding familiar?

During the course of the investigation into the events surrounding Watergate, four of his top aides and the head of the FBI resigned and admitted to being complicit in the cover up. Twenty five members of Nixon’s administration were eventually convicted of various connected crimes. This points us to the vital need for in depth investigation of not just Trump but his entire administration.

During the course of Watergate, there were special elections being held and most considered them to be an expression of voter sentiment. Again this is something we are facing now. Then Democrats took five out of six of these elections. Hopefully, we can make that score. This tells our representatives that there are consequences to their actions. It worked then. It can work now. And is on several levels already.

A few familiar sounding enemies were again the bane of the President. The ACLU was the first national organization to call for impeachment. Civil rights leaders condemned him. An entertaining similarity I came across was a lawyer that was a part of the Impeachment Inquiry was one Hillary Rodham, fresh from law school.

Only the future may speak of what other similarities we may come across in the coming days, but I do not doubt that we will see them.

The tapes that eventually convicted Nixon had been sought after for several months in which Nixon had refused to hand them over. He eventually released edited versions of them in the form of transcripts. In the long run, it took a special prosecutor following them all the way to the Supreme Court to obtain them. Which is exactly what we have been calling for in regards to Trump and his taxes. That begs the question. Are Trump’s taxes his smoking gun?

There have been heroes in our fight. But this is from a hero of that one and ,in my humble opinion, still applies today.

"The Constitution charges the President with the task of taking care that the laws be faithfully executed, and yet the President has counseled his aides to commit perjury, willfully disregarded the secrecy of grand jury proceedings, concealed surreptitious entry, attempted to compromise a federal judge while publicly displaying his cooperation with the process of criminal justice. “A President is impeachable if he attempts to subvert the Constitution.”

If the impeachment provision in the Constitution of the United States will not reach the offenses charged here, then perhaps that eighteenth century Constitution should be abandoned to a twentieth century paper shredder.

Has the President committed offenses and planned and directed and acquiesced in a course of conduct which the Constitution will not tolerate? This is the question. We know that. We know the question.

We should now forthwith proceed to answer the question.