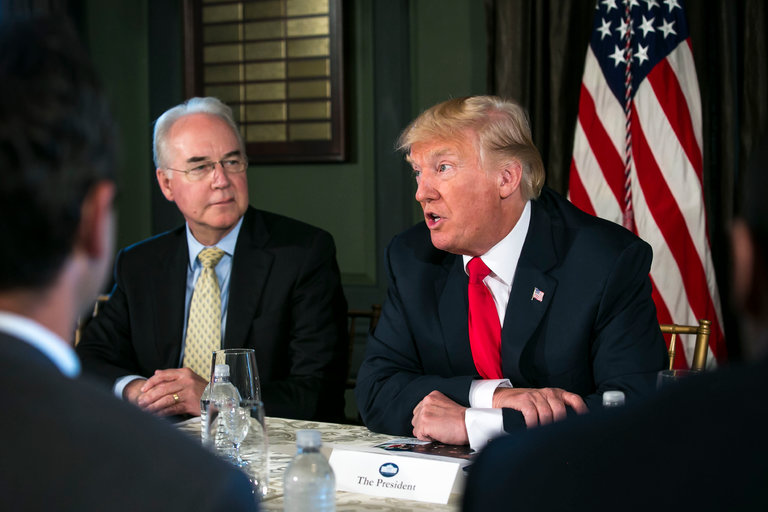 "They will be met with fire, fury and frankly the power the likes of which the world has never seen." That was President Trump's response to learning that North Korea has successfully miniaturized nuclear warheads that can fit into missiles, a move making the isolationist country the latest, and certainly one of the scariest, additions to the handful of nations now possessing nuclear weapons technology.

As a sociologist who has studied international politics, however, I think the world has a lot more to worry about from Donald Trump than it does from Kim Jong-un and North Korea.

Last August, prior to the 2016 election, a group of 50 GOP national security experts published a letter in the New York Times warning about Donald Trump. Despite Trump's fanciful claims of being "modern day presidential," the security experts warned that Trump "continues to display an alarming ignorance of basic facts of contemporary international politics." Trump, they agreed, "would be a dangerous President and would put at risk our country's national security and well-being."

In the days since then, Trump has shown no interest in change or assuaging those fears. Instead, in the days shortly following the election, Trump warmed up to Vladimir Putin after he committed an act of war against America by interfering in the 2016 election. He has lashed out at our allies and upset fragile international relations. And, much as he did at his campaign rallies, Trump has incited violence and attacked former rivals and those in the media who would hold him accountable.

It's little wonder that Trump moved the Doomsday Clock closer to midnight or that a team of 35 psychiatrists at a Yale conference said that Trump has a "dangerous mental illness" and is unfit to lead our country. A rampant liar who can't control himself on Twitter has no business leading America. In my mind, Trump's belief in "alternative facts" combined with his unwillingness to learn or to take responsibility for his actions make him a graver threat than North Korea.

And the threat Trump poses appears to be growing. Far-from relying on careful diplomatic pressures to rein in North Korea, the Trump administration is said to be planning to spend $1 trillion over the next 30 years on ramping up America's nuclear stockpile. As of September, 2015, the United States had over 4,500 warheads in its nuclear stockpile, a number which the Arms Control Association estimates to be closer to 6,800 - a number far greater than the 10 to 30 warheads estimated to be in North Korea. That suggests that Donald Trump--an authoritarian liar who incites violence, refuses responsibility, and has his eyes on a new nuclear arms race has over 100 times the destructive power in his hands than does Kim Jong-un and therefore poses over 100 times the threat.

I've spent years studying domestic and international politics. Along the way, I've come to appreciate the sensitivity, grace, and tact required of our world's leaders. With Donald Trump, I see none of the qualities needed of the "leader of the free world." Instead, as psychiatrists and national security experts before me, I see a man who is as much a danger to America as he is to the world.

It's hard to accept what's happening in America today. It's far easier to escape into a cloud of denial, to write-off criticisms of President Trump as the delusions of unpatriotic, liberal snowflakes. But America is standing in the path of a devastating avalanche. Trump is that avalanche, and he threatens to destroy all in his path - Democrat, Republican, and Independent alike - if we can't set aside our party differences to steer our nation back on course.

DaShanne Stokes, Ph.D., (http://www.dashannestokes.com) is a sociologist, political scholar, author, and pundit. He has been a featured guest on NPR and BBC and other media and has been quoted hundreds of times around the world in outlets like People, USA Today, The Hill, and The Nation. Follow him on Twitter @DaShanneStokes (https://twitter.com/dashannestokes).

Photo by Al drago for The New York Times