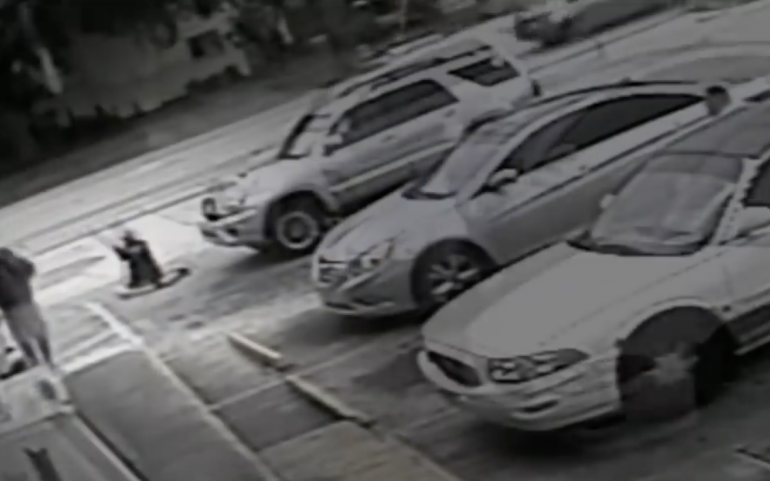 I imagine myself behind the eyes of a young boy, walking out of a store with my dad. Mom and my two siblings are out in the car waiting.

There's a man by the car, yelling at Mom. Dad sees it, and stops it, shoving the bad man to the ground. I remember thinking he's just like the heroes I watch on TV. This story will end differently, but I don't know that yet.

The bad man pulls something from his pocket, points it at Dad. There are a few seconds of silence, and then a loud noise. Dad falls.
This is how I learn about death. I am five-years old.


The real me can only imagine the horror that child must have felt watching Michael Drejka shoot his father in the chest over a parking space. That's what the dispute was about. Apparently, when the boy's mother pulled into the lot of the Clearwater, Florida convenience store, she parked in a handicapped spot. That was enough provocation for an armed man to intervene, and force a conflict that would end in the death of Markeis McGlockton, who that little boy knew only as Daddy.

When the sheriff saw what happened, he did not charge the bad man with a crime, nor did he arrest him. Florida's "Stand Your Ground" law protected the man who started the fight, escalated it, and then killed a father of three. Drejka would be arrested later, and currently awaits trial, but had this case not garnered national attention early on, it's unlikely he would have been charged with anything at all, much less the manslaughter charge he currently faces. And even if he is eventually convicted, which is far from certain, he'll surely get a much lighter sentence than what would accompany the murder charge he would be facing in any sane system of justice.

We've seen this before, when Trayvon Martin was murdered. We know how this ends. When George Zimmerman can stalk a teenager, ignore police requests to leave him be, force a conflict, kill that child, claim protection under "Stand Your Ground" laws, get acquitted, and then sell the gun for a cool quarter million - justice is thoroughly broken. And we're about to learn that lesson again.

I am a father myself, and while I grieve for the families of the dead, my first duty is to my own. My Ohio House of Representatives just passed a Stand Your Ground law the other day, which means the same laws that made it legal to kill Trayvon Martin and Markeis McGlockton now make it legal for some stranger to kill me, or kill my child. So now, while I have no desire to harm anyone ever, there are some very real changes in behavior that I will soon have to adopt. Laws are designed to govern behavior, and this law guides behavior in ways no one has yet fully considered.

According to the current law in most states, before we use lethal force, before we take another life, we have a reasonable duty to retreat from the situation. In short, if we don't have to kill, we are not allowed to kill. Taking a life should be a last resort. This has been the law for a very long time, and while some places interpret it differently than others, the sanctity of human life has always been the driving force behind these laws. Exceptions exist in several states, and they typically give people the right to respond with deadly force in very specific places, like their homes, or their cars, and in these places the right to use deadly force does not include a duty to retreat. This is commonly referred to as the Castle Doctrine.

Stand Your Ground simply removes this duty to retreat, and extends the Castle Doctrine to the entire world. Now, in Stand Your Ground states, any perceived threat anywhere is justification for lethal force. If we can be perceived as a threat (which is often quite different from actually being a threat) we can be legally killed by any fellow citizen anywhere. And as we have seen in numerous cases already, it is quite easy to manufacture that perception, and create a justification to kill.

As an Ohioan in what will soon be a Stand Your Ground state, and as a father, provider, protector, I am forced to grapple with some very difficult questions. As I watch Markeis McGlockton die over and over again on YouTube, I ask myself How could this have been different? How could Markeis have survived? How could I survive if this happens to me? The answer is almost as disturbing as the parking lot security footage.
I must be extremely violent.

Let me explain. The law allows deadly force "against threats or perceived threats" but it does nothing to define either. That definition now falls to the individual, which means anything from an actual threat to a harsh word can be cause to kill. While Markeis McGlockton was killed for shoving a man, he could have just as easily been killed for a shout, or even for a well selected and easily deserved cuss word. The law makes no distinction between these responses. A threat is whatever we think it is. So, when we look at it through this lens, the answer is terrible, but simple. Markeis McGlockton was not killed because he was violent; he was killed because he wasn't violent enough. He did not respond with the level of violence the law now requires.

Stand Your Ground Laws abandon our duty to preserve human life. They create an environment in which any conflict can lawfully end in someone's death, and this forces all of us to act accordingly. Should I get into a conflict large or small anywhere these laws exist, the only way to truly ensure that I can go home and continue to raise my children is to either shoot another human being, or beat that human being into compliant stillness. Anything else trusts my life to the will of another, in a world where there is no punishment should that other choose to take my life from me. The simple, severe truth is that extreme violence is the only course of action that guarantees the outcome that no father would put at risk; it's a choice between death and damnation, compliments of lobbyists and legislators.

I am a decent man, with no desire to harm anyone, but that will not help me should the next gun-wielding behavior critic decide I might have done something wrong. The law now removes my duty to be decent to my fellow man, and compels me to act violently when it is not in my nature to do so. The law has not only made indecency legal, but necessary. Had Markeis McGlockton not been so decent, he might still be alive.

This is a lesson I must learn, and learn well, because there are a lot of red-blooded Americans out there looking for reasons not to retreat.

Coming soon to #Ohio if Republicans get their way:

Person A approaches and *starts an altercation.*
Person B defends his family.
Person A "stands his ground" and kills person B.

Careful, folks. They're looking for fights not to retreat from. https://t.co/t45HGkSTMv

Brett Pransky is a teacher, a father, and a writer, but not necessarily in that order. When not engaged in the good fight, he spends his time as a mild-mannered English professor at Ohio University. Find him on Twitter @BrettPransky.