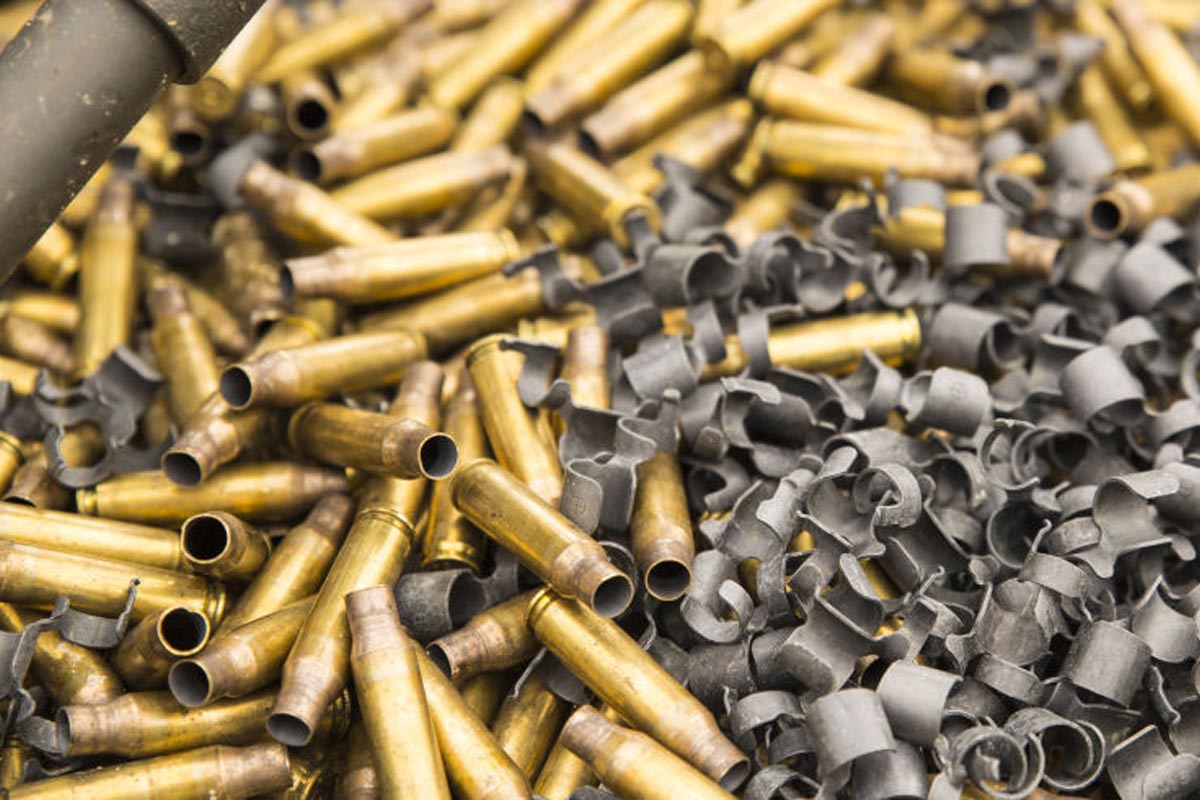 After another senseless massacre, this time in Las Vegas, a large and dare I say inconvenient truth has emerged for all to bear witness to. That truth is that the American fetish for guns as a commodity goes hand-in-hand with the dehumanizing effects of an intensely capitalist society. In 2017 there can be no denying this. And that is why -- in spite of the Las Vegas Massacre -- the likelihood of any of us seeing meaningful gun legislation being passed is all but a pipe dream.

There is no fact to better illustrate this sobering reality than the statistic Nicholas Kristof famously cited in an op-ed for "The New York Times" in 2015, when he observed that more Americans have died as a result of guns since 1968 than there have been Americans killed in all of the wars it has fought combined.

If that isn't sobering enough on its own, the statistics Politifact uncovered when verifying Kristof's claim read as follows: 1.2 million American deaths from war vs. 1.4 million deaths as the result of guns. Incidentally, those numbers have gone up in the two years since Kristoff originally posted his piece.

Karl Marx may not have hit the nail squarely on the head when it came to all of his observations as to how a capitalist society functions, but one thing he absolutely got correct is the magical mystical power commodities hold. And there has been no physical commodity so fetishized over in American society than the gun.

Since Columbus first landed and began butchering the Arawak peoples over another commodity, gold, a spell of commodity fetishism seemed to have descended upon many who have taken up residence on the North American continent. Therefore, wealth, and the extraction of it, has always been the top priority. That enchantment persists to this day. When one analyzes its history critically, beginning as early as Columbus, the endeavor that eventually evolved into the American empire, and all of the political entities existing on the continent prior to 1776, can all be described in any number of ways, the least of which would not be "bloodthirsty."

A death fetish cult has always had a place in day-to-day American society. Indeed, the abstract idea of death itself has grown into a marketing tool aimed at American consumers; i.e., the way in which cheese commodities are marketed, for instance, in body bag-like plastic zip bags to be stored in a morgue-like refrigerator, as opposed to simply letting cheese be exposed to the open air as other cultures do, something Douglas Rushkoff demonstrated in his "Frontline" documentary for PBS, "The Persuaders," to even mottos for insecticide commodities that tell you to "Kill Bugs Dead." It would seem that if you want to succeed in business in America, find a way to incorporate the death fetish into what it is you are marketing, or how you market it, and you just might have a leg up on potential competition. Nothing markets the idea of death quite like the cold black steel of a gun.

This is not to single the U.S. out specifically when it comes to death cults or death fetishes. Indeed many nations, empires, kingdoms, or city-states, can be accused of being obsessed with the idea of killing the "other," for whatever the reason. However, in the case of the U.S. there seems to be something else pathological behind what it is that drives its death lust when compared to other geo-political entities in history. I do not profess to have any statistics to back up this claim, this is speculation on my part, but I can't help but feel one would be hard-pressed to find another warlike political entity -- which the U.S. most certainly is -- who has suffered more deaths domestically, where citizens kill fellow citizens, due to one specific and preventable cause than deaths it suffers on the fields of battle. It is even all the more an amazing statistic to behold when you consider that in its history the United States has essentially been at war for two hundred and twenty-four of its two hundred and forty-one years.

That statistic, more than anything else, is an indication of a disturbing trending truth about the U.S. and many (though certainly not all) of the Americans who call it home. It seems to be indicating that there is a perceivable lack of interest at a human level when it comes to death and murder, even in mass scales. People simply do not care to be bothered by any of it; at least not to the point where appropriate change can be made, anyhow. These deaths and murders simply go on to exist as a means of fulfilling the morbid curiosities and fantasies of a population completely disassociated from one another. Death and murder then gets packaged as entertainment, be it fictional films or television "murder porn," as the saying goes, or as fodder for cable news media itself. It all serves as a means of quenching the thirst of a violence starved audience craving more violence. In essence death and murder are alchemically transformed into yet another commodity. It should be noted that I'm not simply referring to the deaths of people in faraway lands here; that much goes without saying. That middle America has no qualms when it comes to the deaths of people abroad really should come as no surprise. We've got that. But I'm also referring to when it comes to their fellow countrymen. Americans do not care what happens to fellow Americans. And in spite of all the racial injustice running rampant in the country at the present time, the fact is that this is an issue that even transcends racial discord.

There is no question that there is a racial component to the death fetish, but A. the racial component is another matter entirely, which I will not address here, it deserves its own study. And B., that beyond the racial component there is a cold and unsympathetic globalizing economic system -- practiced most intensely by the United States -- which seems to have fostered a mysterious lack of constructive empathy for fellow human beings and for the fetishization of commodities to exist in its place. At the same time, we can also conclude that in promoting such a system for as long as it has been promoted, there is now a subconscious idea seeded in the minds of many Americans living so deeply entrenched in the belly of the free market, that people are, at best, commodities themselves, just as disposable as a used napkin or an empty jar of peanut butter.

White upper to upper middle-class America couldn't find it in itself to care enough about a classroom of young innocent white upper middle-class children being massacred in December of 2012 to enact any kind of legal changes, as has been observed by many on social media in the wake of the 2017 Las Vegas Massacre. What then would make anyone think that those same upper to upper middle-class white Americans would care about, for one, never-ending war being waged on brown people abroad or state-sanctioned violence on brown people at home, let alone care about shooting spree victims in Las Vegas if it would mean that someone might try to infringe upon their gun fetish when they couldn't have cared less about the potential dangers of a repeat of Sandy Hook? Most Americans would have been satisfied with mental competency and background checks. But that wouldn't be allowed. As far as I'm concerned it is the talismanic power of commodity fetishization which lies at the root of this issue, and there is no talisman as powerful in the American psyche as that of the gun. To threaten it is to threaten their entire understanding of how their version of the universe is structured.

Verily, I say unto thee, the capitalist system itself will implode -- or the United States will fall as an existing political entity -- before the spell of the gun as a fetishized commodity is broken. Sandy Hook was the check and mate in the proverbial chess match to once and for all enact gun legislation or not. The anti-gun crowd lost. You can have a massacre of fifty or more people every week, and it will not help the cause. The power of the fetish object in the current system is too strong. In fact, in our violence-soaked culture, all it would do is normalize these instances; therefore lessening the impact of the horror such massacres might otherwise have in another society that hasn't been quite as jaded as ours. In all likelihood what such tragedies would result in would simply be cause for more Americans from the pro-gun side of the fence to cite a gargoyle like Bill O'Reilly, who claims massacres such as the one in Las Vegas constitute "the price of freedom."

In observing that the capitalist system would have to fall before anything like meaningful gun legislation is passed I am essentially illuminating a very disheartening fact, that such legislation will never be passed in any of our lifetimes. This is because capitalism will not collapse anytime soon.

Promoters of capitalism point to its endurance as a virtue. I on the other hand can't help but feel there is something more sinister behind its endurance, as it simply seems now to exist as a hyper mutated zombie-like behemoth which at this point has broken out of its cage and is eating all of the people in the park. But in spite of all its disasters, it persists. What is it that keeps it animated? Again, it's the mystifying fetish of commodities. Such a fetish has the potential to fuel the capitalist commodity-based system far into the future, to a point in time where it leads to a situation where the resources of the planet are completely exhausted and multicellular life has become as rare as an American citizen with a decent credit rating. So if you're waiting for capitalism to collapse, don't hold your breath. It's not going to anytime soon. Democratic states will devolve into fascist states before capitalism goes under. In fact, if you've been paying attention to incidents like what was seen in Spain over the referendum in Catalonia, the so-called drug war going on in the Philippines, proposed content streaming laws in the U.K., and the slow erosion of liberties in the U.S. that began in the wake of the attacks it had suffered as far back as September 2001, one could convincingly argue that this transition might be in the process of happening now. The ancient meme of fascism is once again starting to go viral worldwide.

I hope I'm wrong about what it would take for meaningful gun legislation to be passed. But meaningful legislation is simply not going to happen, not as the result of mass death and carnage. Not when one understands the power of the commodity fetish and how, in the Unites States, that fetish pathologically manifests itself around guns most of all. It would have to take some kind of a sea change, some event or occurrence even more mystical than that of the hold the commodity fetish has on the psyches of a very large and politically mobilized portion of the American populace. What kind of event that would be? I wish I knew. Sadly, however, I do not. All I have to offer are these parting words: please stay safe.

Alexander Quaresma is a freelance writer, and contributor to the Lint Filter blog for the New York lifestyle boutique LICK, digital artist, painter, and perpetual student of life. His tweets can be read @WombatBites