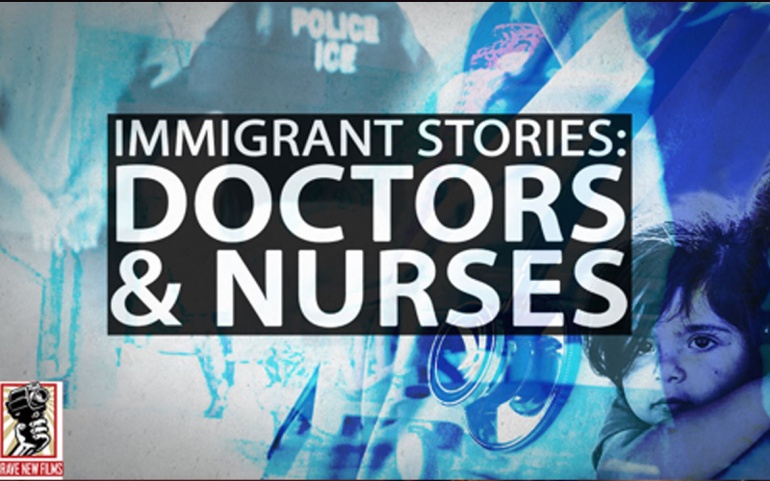 Since Trump has taken office, the Department of Homeland of Security (DHS) and Immigration and Customs Enforcement (ICE) have aggressively targeted undocumented immigrants. With increasing reports of ICE roundups and arrests near and inside hospitals, more and more undocumented immigrants must choose between remaining with their families or risking deportation for medical care - even if their lives depend on it.

Immigrant Stories: Doctors and Nurses, the latest video by Brave New Films, exposes the inhumanity of our immigration policies which force people to choose between medical care or deportation. Doctors and nurses report on the heightened levels of anxiety and stress their undocumented immigrant patients are experiencing–resulting in health complications, missed appointments, failure to pick up life-saving medications, and even patients yanking out their ventilation tubes and fleeing the ICU out of fear of deportation.

DHS maintains a policy for “sensitive locations” - hospitals, schools, places of worship, and public gatherings - where no immigration enforcement activity should take place unless there is a threat to national security or public safety. Unfortunately, this policy is just a set of vague discretionary guidelines that agents can ignore as they see fit.

The Protecting Sensitive Locations Act (H.R.1815/S.845) would strengthen and codify the current guidelines, expand the list of sensitive locations to include courthouses, bus stops, and other organizations that serve vulnerable populations, and would prohibit enforcement activity within 1,000 feet of any sensitive location.

The bill currently sits in judiciary committees in both the House and the Senate. It was introduced in the Senate by Sen. Richard Blumenthal (D-CT) on April 5, 2017, and in the House by Rep. Adriano Espaillat (D-NY 13) on March 30, 2017.

We urge Congress to pass the Protecting Sensitive Locations Act. No human being, whether undocumented, documented, or a citizen, should ever feel unsafe when seeking medical care.

Brave New Films is a 501(c)(3) organization focused on using new media and internet video campaigns to inform the public, challenge corporate media with truth, and motivate people to take action on social justice issues nationwide. Follow us on Twitter at @bravenewfilms and visit our website at bravenewfilms.org for more.