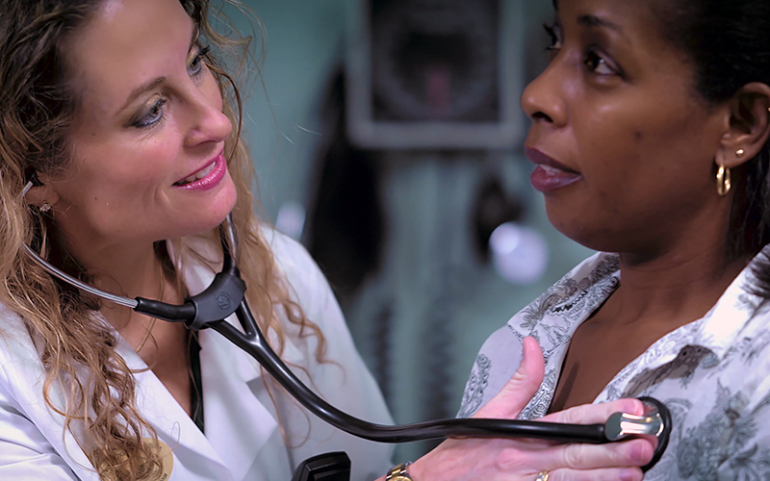 Nearly every single country in the developed world has universal healthcare. But not the wealthiest nation on Earth: the United States of America. In a nation like ours, with such riches and talent, why isn’t healthcare a right, rather than a privilege?

As a doctor, I believe that no one who is suffering should ever be denied effective treatment, regardless of the ability to pay. Simply being able to “see a doctor” doesn’t help much when you’re really sick. Indeed, affordable and effective treatment literally makes the difference between life and death.

It wasn’t so long ago that the situation was even worse than today. Fifty-two years ago on July 30, President Lyndon B. Johnson signed Medicare and Medicaid into law. Before Medicare, about half of senior citizens had no health insurance, and many of those “covered” had insurance that didn’t really cover anything. Can you imagine? That’s at least half of our parents and grandparents with little to no healthcare!

Yet, despite the advent of Medicare and Medicaid, millions of Americans still lacked access to affordable healthcare, as I saw when I treated patients.

One of my patients, Mr. V, lost his healthcare coverage when he got laid off. He nearly died from heart failure, simply because he couldn’t afford the tests and treatment he so desperately needed. Through a free clinic where I volunteered, I helped Mr. V get free medication and physical therapy, so that he could live and return to a normal life.

Another one of my patients, Mrs. C, wasn’t so lucky. Although she knew she was sick and had desperately sought help, no one would treat her, because she didn’t have health insurance. When I first met Mrs. C, I gave her a thorough examination, without thinking about whether she had insurance. Unfortunately, I diagnosed her with throat cancer. Tragically, her cancer had already spread too much and was inoperable, so her only real “option” was hospice.

Indeed, it took another forty-five long years after the passage of Medicare and Medicaid before “Obamacare” (the Patient Protection and Affordable Care Act) became law. Obamacare marked an important milestone in our nation’s history, as we took another major step towards universal healthcare coverage.

Well, if we are being honest, only President Obama and the Democrats in Congress took this major step.

Thanks to Democrats, since 2013, Obamacare has dramatically expanded health coverage and decreased the number of uninsured by one-third to the lowest rate since 1972. That’s rather amazing!
Yet what has the Republican response been to such progress?

Blame Obama! For what, exactly? For decreasing the number of uninsured by one-third to the lowest rate since 1972? How dare he!

Repeal Obamacare! Why? For requiring insurance companies to cover people without taking pre-existing conditions into account? Yeah, I guess that Republicans have to look out for those insurance companies, because they aren’t making enough money, right?

Replace Obamacare! What for? Because Obamacare won’t allow insurance companies to drop someone’s coverage, if a person is diagnosed with cancer or some other terrible (and expensive-to-treat) disease? Yes, this is another excuse used by Republicans to “prove” that Obamacare is really, really bad.

That’s right. Republicans manufactured an utter myth that, instead of helping people, Obamacare is to blame for…well, everything! Obamacare became the GOP’s rallying cry. The GOP’s call to arms. In every election across the country, nearly every Republican candidate vowed to “repeal and replace Obamacare.” Unfortunately, what many Americans didn’t realize is what the Republicans were really saying was, “Vote for me, and I will take away your healthcare. Yippee!”

Indeed, in the 7 years since Obamacare passed while President Obama remained in office (and don’t we miss those days!), Republicans tried to take away the very benefits that help to keep millions of Americans healthy and alive. In fact, Republicans in the House of Representatives voted more than 60 times to repeal or alter Obamacare, knowing that even if the

Senate passed the bill, President Obama surely would veto it.

This is what passes for “progress” in the Republican Party? Sad!

After Trump “won” the election, Republicans geared up with gusto to finally do what they had promised all of those years: repeal Obamacare. But then, a funny thing happened on the way to repeal. Obamacare became more popular than it had ever been before.

So what did Senate Republicans do? Good ol’ Mitch and his 12 closest pals in the Senate (all white men, with no women or minorities) conjured all sorts of “plans”: repeal-only, partial repeal, “skinny repeal” (whatever that was), repeal-and-replace…WHAT was actually in the bill didn’t seem to matter to them. Apparently, 1/6th of our economy, let alone the well being of Americans, wasn’t really important to Republicans. Nope. The only thing that mattered to Republicans was that they passed some sort of Obamacare repeal bill. Anything!
And even though Republicans had 7 long years to come up with their own plan to repeal and replace Obamacare, the reality sunk in: THEY HAD NO PLAN. None. Nada. Zip!
The jig was up. Americans finally realized that the Republicans’ whole “repeal” game was a fraud. A false prophecy. For what? So that Republicans could win elections.
And so, thanks to every single Democrat in Congress and two brave Republican Senators (Susan Collins and Lisa Murkowski), who refused to repeal Obamacare, along with Senator