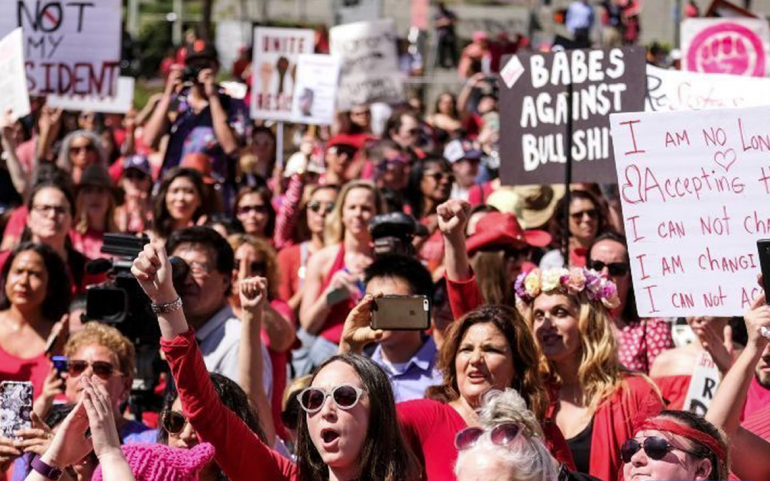 On January 20th and 21st, women led millions once again to take to the streets. From tiny Walla Walla, Wash., to St. Petersburg, Fla., to the major cities of New York and Los Angeles, citizens of all ages and backgrounds carried signs calling for a return to logic and compassion.

One of the cultural shifts of the past few years has been the reclamation of word definitions. Boomer women are enjoying a reclamation of the word “feminism” away from the Alt-Right shock jocks who for years scared people away from Femi-Nazis. Millennial led campaigns include #BanBossy and #FightLikeAGirl.

Some cancer awareness and fitness campaigns now use the hashtag #FightLikeAMother, but strangely it is almost never viewed in a political context. #MomsDemandAction and groups like them may help change that though.

Generation X women are reclaiming not only the word “Mother,” but the archetype as well.

Archetypes abound in art, film and literature as unconscious projections that serve to embody central societal and developmental struggles. This form of myth-making reflects our psychological and cultural attempts to fit (or trap) people neatly into understandable boxes.

The Mother archetype has always been one fraught with contradictions. The positive view of the archetypal Great Mother is pure and good and kind. Sweet and self sacrificing. Ever suffering and worrying. As American as Mom and apple pie, so to speak. Conversely, the negative side is the Mother demonized as emotional, controlling, bitter. Lost somewhere in the experience, is the feeling that surprises many modern women that they suddenly must justify themselves individually and culturally relevant.

“These are three essential aspects of the mother: her cherishing and nourishing goodness, her orgiastic emotionality, and her Stygian depths.” —Carl Jung, Four Archetypes

Just as women have been reclaiming the other archetype for women of a certain age, the Crone wise elder woman, we are also reclaiming our definition of what it means to be The Great Mother.

Modern mothers maintain vigilant focus on current and future facing issues of safety, health, education and opportunity not only for their families but also for themselves. Mothers also instinctively exemplify the collaborative leadership mindset that, “it takes a village to raise a child.” This is true whether or not they are single parents.

The assault on those core values is one reason we have seen so many middle-aged Generation X mothers getting involved in politics and activism at the busiest time in our lives. Despite being often overwhelmed with the competing needs of career, children, health and caregiving for aging Boomer parents, GenX women are making time for political activism.

As I have been writing for several years, overlooking the issues important to Gen X is an obvious oversight. As the small and oft forgotten age cohort sandwiched between Boomers and Millennials, the two largest generations in human history, Xers are the up and coming generation of senior leaders for the coming decade.

An analogy would be senior middle managers preparing to take over from retiring executives. It will not be the millennial 20 and 30-somethings who will next assume the reigns, it will be those now between the ages of 40-55. Gen Xers.

American Xers were the first generation raised after the Women’s Movement. This meant many were taught to believe girls would have the same rights and opportunities as boys. Although that has not turned out to be the case, the underlying belief in the idealism of equality and meritocracy offers insight for our coming time at the head of the table.

Gen X women, many of us mothers and some even now young grandmothers, are changing narratives and uniting people around common core American values for the future. We are the ones who created the Mom Blog genre for sharing nontraditional mothering topics on everything from post party depression to secular homeschooling and community activism. The worldview of our age cohort of women, especially the very different experiences we have had as Mother Leaders, will leave a lasting imprint on American society.

Gen X mothers are less interested in ensuring that every child gets a trophy and more interested in making sure that our children will have a planet to live on in the future, clean water to drink, a quality education and the opportunity to find a good paying job.

But, we are most immediately concerned with their every day safety.

Contrary to the claim from the Trump administration after the 11th school shooting in 23 days, gun violence is not the result of some Obama era “domestic abuse” crime wave. This heightened concern for children’s safety is a result of the epidemic that has been threatening our children for two decades since the Columbine attack in 1999.

Almost 300 school shootings have occurred since 2013.

If there was ever an issue in need of bipartisan solution, it is the epidemic of school shootings. Done waiting for the right time to deal with gun control, and as the most educated generation of mothers in American history, Gen X mothers began to assume activist roles in the leadership vacuum of “thoughts and prayers.”

Mother-led organizations have been working to raise awareness and bring people together to finally solve this shameful feature of modern American life for the past five years. These generational leaders are defining how to “fight like a mother.”

As explained on their website, just as Mothers Against Drunk Driving formed to reduce drunk driving, Moms Demand Action for Gun Sense in America formed to demand action from state and federal legislators, companies, and educational institutions to establish common-sense gun reforms. The organization was founded by stay-at-home mom Shannon Watts in 2012 after the shooting at Sandy Hook Elementary School that shocked the nation.

In just a few short years, it has grown to include chapters in all 50 states and a powerful grassroots network of mother activists that have successfully effected change at the local, state and national level by forging collaborative efforts across the political spectrum.

Bipartisan solutions are created when you collaborate from shared goals.

As part of Everytown for Gun Safety, a movement of Americans working together to end gun violence and build safer communities, more than 4 million mayors, moms, cops, teachers, survivors, gun owners, and everyday Americans have come together to make their own communities safer.

This collaborative skill set is now being expertly applied on a multitude of issues by mothers turned protesters of the current administration. It is a skill set that will be even better used as more women run for and assume elected office.

Bipartisan alliances formed to end this shameful national epidemic will help to shape the future of GenX political leadership for years to come. Collaborators on one issue will be more easily approached for work on another. The same women fighting for sensible gun reform today will be well prepared to tackle the pressing issues facing our country with a network of community spirit.

And, good mothers that we Gen Xers are, we will mentor the girls that follow to keep on fighting like a mother for many generations to come.

Gayla Schaefer, MPA is a freelance writer and communications consultant with degrees in political science and public administration. Her research and writing has been published or republished by the Associated Press, IGI Global, and Gannett News publications. She lives in the Tampa Bay metro with her husband and twin boys. Follow her on Twitter at @DharmaMum