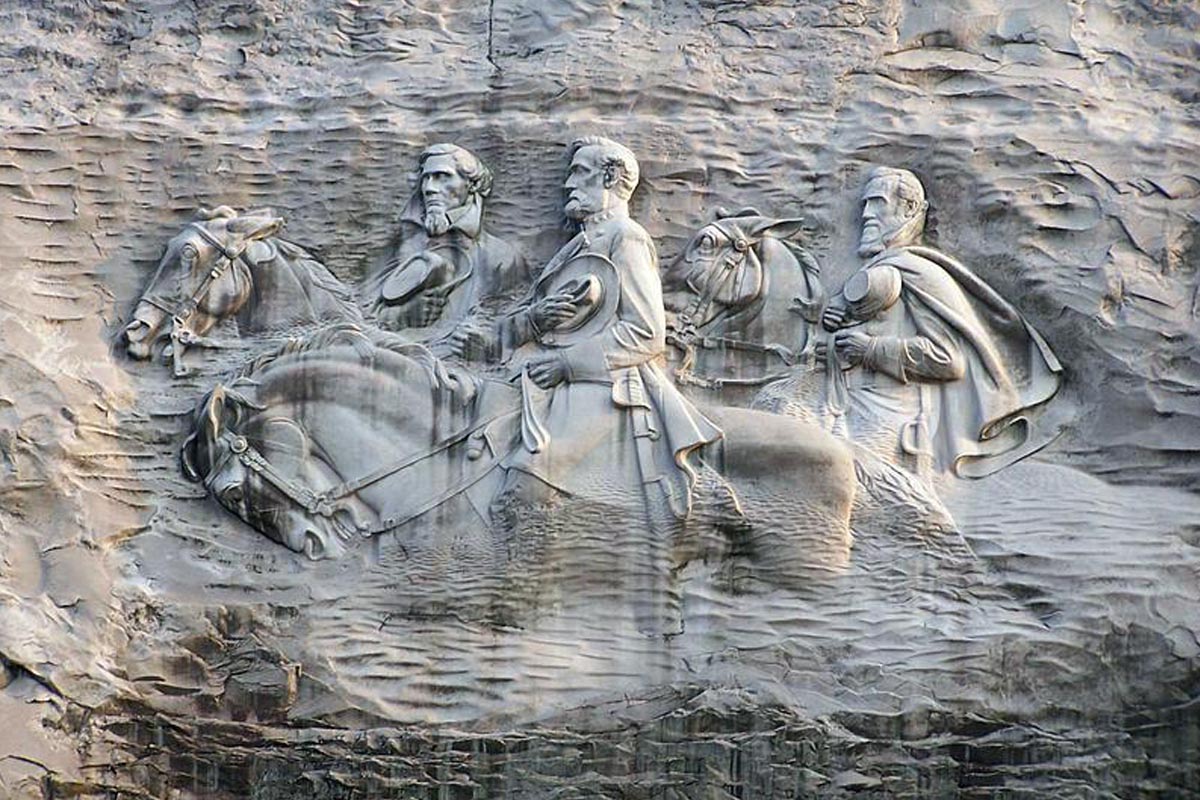 On August 15th, in a press conference at Trump Tower, president Trump successfully retconned the media into focusing on confederate statues, instead of the Nazis marching in the streets. As the country's attention turns to the signs of the confederacy in their cities, those of us in the peach state may be turning to stone mountain. As a native Georgian, I'm no stranger to the confederacy; I'm old enough to remember when St. Andrews cross was still prominently displayed on our flag (until 2001) and then less boldly shown (until 2003).

I remember my fifth-grade teacher ending each lesson on the civil war with a chapter of Mildred B Taylors "roll of thunder hear my cry," her classically stern demeanor cracking whenever she read about the brutal violence in a Depression era, Jim Crow Mississippi. I remember coming out to my father's car and seeing KKK keyed in bold letters under the handle, letters that would stay there until the death of said car, a clear message that we were doing something right in our Jewish outreach. 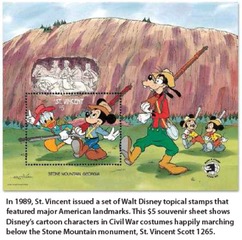 But most prominently, I remember Sunday trips to Stone Mountain. Turning left from Stonewall Jackson Dr. onto Jefferson Davis Dr., and then again onto Robert E. Lee Blvd, we would gaze up at the mountain as the streets namesakes came into view above us. The antebellum triumvirate, eyes stern and backs straight as they rode off towards some unseen battle, always inspired awe in me, and in my young mind, I could hear the battle raging around them, helped in no small part by the enactment videos playing inside the visitor center.

It wasn't until I was eight or nine that I started to wonder why these men deserved such a grandiose tribute. In my immature mind, they were the losing side, and therefore belonged in history books, and no more. The answers I received ranged from "well, it brings in a lot of money from tourism" to "a monument to all the confederate soldiers who died" to "they were fighting for the South's right to be independent" the latter being an answer that went straight over my head.

As I got older however, I began to learn what that answer, and by extension the second one as well, meant exactly. In middle school, we learnt a more in depth history of the war, and there we were taught that there was a second cause to the war, secondary to slavery, but still important. I was taught that We were fighting for the right to govern Ourselves as We saw fit, the specificity of the pronoun not escaping my attention. The southern states felt that the north was attempting to impose their culture (anti-slavery), and by extension politics (abolition), on them, and so seceded.

It wasn't until five years later that I learnt this was a more recent invention, meant to help lift the spirits of the south. Emotionally broken after the war, and with a crippled economy, The Lost Cause-as this rewriting of history would come to be known - helped convince the returning confederates that this had been a morally righteous battle, and that the men lying on the battlefields had died for more than the right to own another person. It allowed for them to convince themselves that theirs was the righteous side, it would have been immoral to free the slaves, and that it was a Christian virtue to keep them, as Robert E. Lee wrote himself:

"I think it however a greater evil to the white man than to the black race, & while my feelings are strongly enlisted in behalf of the latter, my sympathies are more strong for the former. The blacks are immeasurably better off here than in Africa, morally, socially & physically. The painful discipline they are undergoing, is necessary for their instruction as a race, & I hope will prepare & lead them to better things. How long their subjugation may be necessary is known & ordered by a wise Merciful Providence. Their emancipation will sooner result from the mild & melting influence of Christianity, than the storms & tempests of fiery Controversy."

The lasting effects of The Lost Cause are many, and extend to more than the classroom, but the most prominent effect it had was the proliferation of statues and monuments to the confederacy. After all, when you view the cause of the south as nothing more than a virtuous struggle for states' rights, the soldiers who died become valiant warriors, and their leaders, visionaries. No one was more involved in this campaign than the United Daughter of the Confederacy, responsible for the large majority of the 718 confederate statues and memorials around the country, and it was the UDC that proposed the confederate memorial on stone mountain in 1914.

It was a member of the UDC, Helen C. Plame, who proposed what she called "A Shrine to the South" to be built, and for stone mountain to be the location. The idea gained southern support, and later in the year a moderately well-known Connecticut sculptor named Gutzon Borglum was approached with the idea. With a flood of funding that came along with the initial enthusiasm for the idea, he soon devised a grandiose idea that included the main figures we see today, along with almost 1,000 smaller background figures.

It is at this point that we run into a second part of the souths less desirable history; the re-founding of the KKK. Besides donating the usage of Stone Mountains sheer face for Borglums carving, Sam Venable, the owner, met with a group of men led by William J Simmons and two members of the original klan, and with the burning of a homemade cross on November 25, established the KKK in its second incarnation. He also gave the Klan an easement on the mountain, essentially giving them eternal access to hold ceremonies on the mountain. These two histories; of the klan and stone mountain, are linked by Borglum himself.

While it's not clear that Gutzon was ever a due paying member of the Klan, we do know that he made use of them for funding the carving, even going so far as to meet with one of their Grand Dragons in 1923, to secure badly needed funds. Whatever the case, Borglum quit the project in 1925, smashing his models and leaving town with a mob at his heels. He would go on to begin, and carve, a large part of mount Rushmore, the project he is known for today. The project languished until 1954, when the Brown v. Board of Education decision ignited racial tension in the south once more, and the state government purchased the mountain. Work resumed ten years later, and was finally completed in its current form in 1972.

All of this information was news to me, as I'm sure it will be to many of my friends and classmates, which leads me to what I believe is the heart of the argument surrounding these monuments. One side is arguing that the monuments, statues, streets, and more represent the worst of our country. Men who fought for their right to own another like cattle are glorified in bas-relief a thousand feet high, looking smugly through the ages at the people they fought to enslave. The other side counters that they had different motive, that of The Lost Cause, or the more truthful argument, as put so eloquently by Condoleezza Rice

"I'm a firm believer in 'keep your history before you.' And so, I don't actually want to rename things that were named for slave owners, I want us to have to look at the names and recognize what they did, and be able to tell our kids what they did and for them to have a sense of their own history."

So no, the statues to General Lee, Jefferson Davis, or any confederate person of note, should not be displayed proudly in our towns and parks. Rather, they should be displayed as a lesson to everyone passing by. Their plaques should be removed and replaced with ones that describe these men as exactly as they were. Traitors to the constitution, and men who pit the country against itself for the right to practice what we now know to be our countries great shame. They don't need to be torn down, we need to go out and educate, because as George Santayana said "those that forget the past are doomed to repeat it".

Remembering our past doesn't just mean dates and names. It means learning and understanding the true motives behind our history, not the revisionist version. We can't bury our countries past, but neither can we promulgate a false narrative of it. Tearing down statues means forgetting history; Education means keeping our history before us.

As for stone mountain, the same. The street names honoring the men should be changed, and a more accurate history introduced to the Confederate Hall museum. One that explains exactly the motives of the men that fought for its namesake, because besides for the sheer impracticality of it (there's a law on the books here that would prevent the mountain from being torn down) once you start tearing down our history, what comes next. Do we tear down Rushmore because of Gutzon Borglum's KKK and white supremacist sympathies? Do we take the names of Washington and Jefferson and trample them through the mud, as some voices on the left are already calling for? We need to keep our history before us, because without it not only do we repeat it, but we repeat it in a far worse fashion.

Mutik grew up in Georgia and is trying this whole writing thing for the first time. You can find him on twitter @mutiksch.