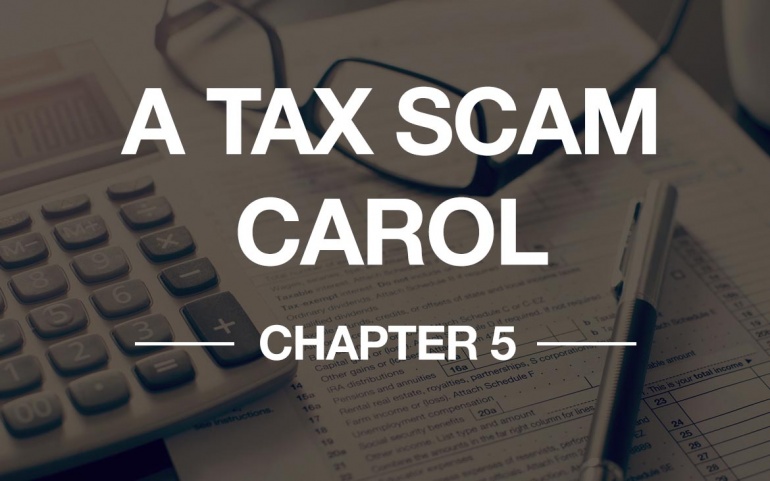 Although Scrooge had not slept a wink and had traveled great distances since the ringing of one bell, he found himself possessed of a vigor he had not experienced since his childhood. Bright light streamed through the window, and he grabbed for his telephone, quite uncaring of the hour or the past.

“Quickly,” he tweeted, “what is day is this? By God, what day? #BeautifulMorning,”

All at once, the replies came pouring in, by the tens and by the thousands. “Why, it’s Christmas Day,” they said, “#MerryChristmas.” Why, he spared not even a single cruel thought for the haters, nary a “Bah, Haters!” crossed his lips, so infused was he with the spirit of the day.

If it was indeed Christmas Day, there was much work to be started. Much work indeed.

Just then, a loud bang came upon his window, and he saw with great delight a snowball, flattened and starting to drip, had struck a lower pane. He thrust open the window to spy the culprit.

Below, two of the slower boys in town, little Mitch McConnell and the dough-faced Peter King were conspicuously covering their laughter and attempting to look innocent.

“You there,” he shouted down, “today is Christmas Day, is it not?”

“Yes, Mr. Trump,” the dimwitted children trumpeted back, not daring to look up.

“Well then,” he cackled, “you’d better arm yourselves well before I get down there!”

Trump whirled about his chamber, pulling socks and boots and a long coat and hat on above his dressing gown, not even bothering to change into his Chinese-made suit and tie that bore his own name. Soon, he was plunging his hands into woolen mittens, giggling with glee at every turn. He took the stairs down as fast as his little-used old legs would take him, and burst forth from the door in such a fervor that passers-by asked him if he was well.

“Yes, yes,” he cried joyfully. “Why, it is better than well,” he bellowed as he formed two large, squishy balls of snow before their stunned eyes.

Just as stunned were the dullards McConnell and King, who stood, mouths agape just Trump fired, and his aim was true, and soon the air was full of missiles between Trump and the boys, and before long the entire street had joined in.  The freshly-fallen snow was perfect for snowballs, and after a few loud extortions that the people must also throw at Trump himself, he convinced the crowd to include him, and a great grand time was had by all.

Winded and wet, with a smile wider than he ever remembered smiling before, he pressed hard candies into the hands of McConnell and King. “Take these, boys, and remember the spirit of giving on this, the most glorious of days!” The boys gobbled the candies quickly, before Trump could return to his senses and snatch them back and went on their way.

Trump found himself soon at the butchers. “Your finest goose, then, and bind it up tight – I’ll have many a parcel to carry today!”  He tipped the astonished butcher handsomely, took his parcel into the pharmacy next door. Here he bought tinctures and medicines and vitamins and remedies, and toys such as you have never seen.  Soon, he had great armfuls of treasures in his carriage, and he bid the counterman to wrap each one separately, and bind it with a beautiful ribbon.  For this, he was tipped a whole week’s wages while Trump giggled and wobbled under the weight of the great stack of gifts piled in his arms.

Out on the street, he sought out conveyance, and bid his driver to take him to the Sanders’ humble home.

Soon, he was gathering his courage and knocking on the door. Sarah answered, her furrowed brow even more lined in puzzlement at this appearance before her: Ebenezer Trump, the man who docked her a day’s pay for a spilled inkwell stood before her with a goose in one hand and a great carriage filled to bursting with brilliantly adorned parcels in the other.

Trump barreled in past the astonished woman, and said “Come now, Sarah, we’ll need to start cooking this goose soon if we’ll wish it to be crisped by supper. He set the goose down in the small kitchen, and sprang brightly into the dingy little living room.  Here, Sean Spicer Sanders was sitting on the floor surrounded by his sons and daughters, who were laughing and cavorting about although they clearly had not received gifts for the holiday.

“Goodmorning, Mr. Trump,” the children said obediently when chided by their father.

“And a very Merry Christmas to each and every one of the Sanders family,” he returned merrily.

At this he pushed the carriage of gifts into the room with a flourish, and the children gasped in astonishment. Soon, there was a flurry, and as happens in houses every Christmas, paper was flying, children were exclaiming over their gifts, and a great mess was made.  Only Tiny Mike Pence Sanders seemed distant, a pallor to his skin and a deep, rattling cough.

“Now, now, Master Mike Pence Sanders,” said Trump, that will never do,” and began pulling tinctures and medicines from the pockets of his greatcoat.  In no time it all, it seemed, Tiny Mike Pence Sanders cough began to ease, and with it, his mirth returned.

“Bless you, Mr. Trump,” said Sarah Huckabee Sanders, still gobsmacked at this unexpected change in circumstances. “Please, your coat is still on. May I take it, and won’t you join us for Christmas Dinner?”

Trump was delighted to stay, and it was only as he removed his coat that he remembered he had only his dressing gown underneath.  No matter! He performed a very formal and very silly dance for the children, who cavorted with him, and soon, they too were asking to spend Christmas in their dressing gowns, and before long Trump and the Children were all ready for bed at the hour of noon, remarking on the delicious smells emanating from the kitchen the next room over.

Before long it was time for dinner, and such a dinner it was. The goose came out crackling and brown, and full of spiced chestnut stuffing Trump had procured from the grocer. There were beans and chestnuts and more goose than anyone had ever before eaten, and then there were mince pies and pumpkin tarts. At the end, Trump pulled out the coup-de-grace, a very aged, very rare brandy he had taken from his cellars for just this occasion, and soon the adults were just as ruddy and excited as the Children.

“Thank you ever so much, Sarah,” Trump said, meaning it, “I shall see you in the morning, then?”

“Yes, Mr. Trump,” she said, and hesitantly, “Thank you. Especially for Tiny Mike. Today was a gift I shall cherish. I do not know that he has many more days.”  As a tear splashed form the corner of her eye, she closed the door. Trump rode home and slept on a heart that was full and heavy.

In the morning, he rose very early and arrived in the offices well before Sanders. He stoked the fires high against the chill, and moved the coal bucket and scoop squarely behind her desk.

When she arrived, she thanked him again for his generosity.

“Generosity?” he asked. “Bah! I have been a cheap loser. A hater, even. To think, me, a hater! But all that is going to change!”

“Yes, to start, I shall be providing health insurance to you and your family. It is such a small expense to have such a loyal member of my staff.”

“In fact, I’ll have make the other well-to-do about town do the same, and chip in a little extra for those who have no work. Really, it is a pittance, and we can surely afford a pittance,” and as he said the words, he believed them.

Sarah wept as he continued.

“In fact, for just another pittance, I’ll make sure you are all paid enough to live happily and safely, and that your children will have sufficient funds to pursue an education. After all, a businessman needs a well educated staff, does he not? And it costs so little,” and to his astonishment, he meant every word as he said it.

And so it was that every man, woman and child stopped worrying about how they could afford foods and medicines and education, and soon enough the town was thriving like never before. The small amount of money laid out to fund these endeavors by the wealthiest hardly had a chance to be missed before it returned to their coffers three-fold, with healthier and happier and better-educated workers.

And every year, Trump bought the biggest goose for the Sanders family, who no longer needed the charity but realized that Trump in fact did need it. He had an honored place at the head of the table, where he told tales to the children, and after some years to their children, always with a twinkle in his eye and a feeling of pride for the strong, sturdy and health young man Tiny Mike Pence had grown up to be.

When he did finally die, he was surrounded by people who loved him, and his legacy was a town who always looked out for one another, who used their strengths to cover the weaknesses of the others, and which prospered for all of the Christmases future. Sarah Huckabee Sanders, a partner now in Trump, Sanders and Sanders, wept over his grave, and for just a short moment she thought she heard Trump’s voice chortling “Why, this is hardly a chain at all, Bannon! It weighs so little, I think in fact it buoys me up!”

And with that, no longer so Tiny Mike Pence Sanders placed his health hand on his mother’s back and exclaimed “God bless us, every one!”

Benjamin Jackson is a writer and father of a chronically ill teenager who somehow still likes him. His non-fiction and opinion pieces have appeared in Patch Media, WBUR's Cognoscenti, and the Penmen Review. His fiction and poetry has been published in New Millennium Writings, The Legendary, 50 Word Stories, and anywhere else he can con an editor into buying his work. He lives in Natick, Massachusetts with his daughter.