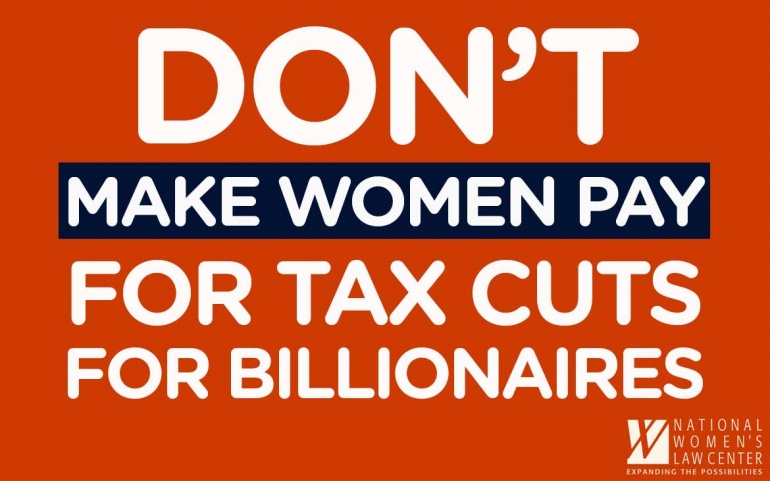 As the GOP tax bill vote looms ahead in the Senate—they could vote as early as Thursday or Friday—it’s imperative to understand which groups the proposed plan protects and which ones it would hurt, and how. In short, the tax plan would benefit corporations and the wealthiest Americans, while devastating our most vulnerable populations: low-income families, women, children, the disabled and students. In other words, it’s a typical conservative Republican approach.

I spoke with Anna Chu, Vice President for Income Security and Education at the National Women’s Law Center, about how the GOP tax plan is a bad deal for women.

Maureen Shaw: How does the GOP tax plan impact women's and children's healthcare?

Anna Chu: This is the Affordable Care Act fight all over again. What Republicans couldn’t get done after rounds and rounds of votes, they are now trying to sneak into a tax bill. The GOP tax plan would gut the Affordable Care Act by eliminating the individual responsibility provision. This would cause 13 million people to lose health insurance—that’s millions of women and children across the country. It would also raise health insurance premiums by approximately 10 percent—that means millions of middle class families would pay hundreds of dollars more each year. This is unconscionable.

MS: More women—specifically mothers—are breadwinners in households than ever before, meaning their incomes are vital to the economic well-being of their families and communities. How will the GOP tax plan affect these women?

AC: Everyday women supporting their families would get little to no help from the GOP tax plan. In fact, many—including women in tough life situations—would actually see their taxes raised over time.

For example, the GOP tax plan would eliminate a crucial tax benefit for individuals struggling with serious illness. Let’s say Judy is a mom with a very sick child who needs to see an out-of-network specialist. The medical bills to see that specialist can skyrocket pretty quickly, but under the current tax cut, Judy can take a tax deduction for medical expenses exceeding 10 percent of her income. The House GOP tax plan would kick Judy when she’s already down. Or take Sarah, an elderly woman who could find herself paying high costs for long-term care. And because women live longer than men, it is likely that she will be shouldering these costs alone. Long-term care can run into the tens of thousands of dollars, but current law would allow Sarah to claim deductions for medical expenses that are above 10 percent of income. Indeed, three-quarters of those who claim the medical expense deduction are above age 50 and three-quarters have incomes of $75,000 or below.

Or, let’s say Alice is one of the millions of women paying off student loans even as Alice is starting a family of her own. Well, the House GOP tax plan would no longer allow Alice to deduct the student loan interest from her taxes.

But millions of women who may not have high medical bills or student loan payments, would see their taxes go up under the GOP tax plan. The biggest winners from this tax plan are corporations and the wealthy. Corporations will have their top tax rate slashed down to 20%, while the wealthy few and their heirs will get a tax cut. In contrast, everyday women would get only token benefits, such as an increase to the Child Tax Credit that is available only to people making above a certain income level. And under the tax plan, these token benefits actually decrease over time and eventually end. According to the nonpartisan Joint Committee on Taxation, under the Senate bill, the end result is that on average, families making under $75,000 would see a tax hike after a few years.

MS: What are the implications for women of color under the GOP tax plan?

AC: The GOP tax plan is terrible for women of color. At nearly every point, they are getting the short end of the stick.

First, as I’ve stated before, the majority of the tax cuts are going to corporations and the 1 percent—not to everyday people and not to women of color. Second, some of the tax benefits that are being eliminated would particularly hurt women of color. For example, Black women face the highest levels of student debt and would be hard hit by the House bill, which eliminates the tax deduction for student loan interest.

Additionally, the tax bill may also bar many immigrant women from claiming the Child Tax Credit for their children. The tax plan adds a new requirement—providing a Social Security Number for each child claimed for the refundable portion of the CTC—which could exclude a significant number of children in immigrant families.

MS: The Child Tax Credit sounds good on its face—a nonrefundable $1,000 increase—but in actuality, it’s quite exclusionary and ignores the realities of rising child care costs. Can you explain how this tax credit harms low-income families?

AC: The Child Tax Credit proposal leaves out the families who need the most help. Nearly two-thirds of minimum wage workers are women.  Nearly six in ten people working in low-wage jobs are women, many of whom are supporting children.  While the House and Senate tax bills propose to increase the Child tax Credit, they allow only families with a certain amount of earnings to get the increase. This means that the most vulnerable families are left out from receiving that increase. Additionally, lower-income families who may benefit would get only a token amount: for example, a single mother working full time at the federal minimum wage and earning $14,500 would only receive an additional $75 in CTC benefits under the Senate bill.  And adding insult to injury, under the Senate bill, the increase to the credit Senate bill would expire in less than 10 years. So this Child Tax Credit proposal really would do nothing to help families meet the high cost of child care – which can cost more than in-state college tuition in many states – or food, or clothes, or other necessities.

MS: The House and Senate GOP tax plans (because the language is in both bills) includes a definition of “unborn child” that they claim would allow families to set up 529 college savings accounts for unborn children.  However, current law already allows families to set up accounts for future children. Is it fair to say this is just a ploy to enshrine anti-choice ideology wherever possible? And what might the possible fallout be for reproductive rights?

AC: Yes, this is nothing but a blatant attack on abortion in a tax bill provision about college savings plans, of all places. Both the House and Senate tax bills would allow an “unborn child” to be designated as a beneficiary of a 529 college savings plan. But this language really has nothing to do with taxes or college savings—the current tax code allows expectant parents to create a 529 savings plan in their own name and then switch the beneficiary when their child is born. This language is really about advancing an extreme anti-abortion political agenda by embedding in law a definition of “unborn child.” This is an attempt to set the stage to challenge the U.S. Supreme Court’s ruling in Roe v. Wade, which relied in key parts on the finding that that fetuses are not “persons.”

MS: Long-term, how disastrous would this tax plan be for women and families?

This plan would destroy the very foundation holding up millions of women and families in the country. The tax plan would cost trillions of dollars—a price tag that Republicans will seek to offset from spending on programs that are essential to women and families, including Medicare, Medicaid, affordable housing, public education, child care, Meals on Wheels, and more—all to pay for new tax cuts for big corporations and the wealthy few. It is immoral.

But it’s not just immoral; it’s irresponsible and reckless. And recent history shows that it’s everyday families who would be devastated. In 2012, Kansas enacted massive tax cuts that mainly benefited the rich—some low-income families even had their taxes raised in order to pay for the tax plan. What happened next was that revenues plummeted and the governor had to cut funding for schools—so much so that some schools in Kansas had to end the school year early because they could not afford to stay open. So basically, Kansas’ children had to pay for tax cuts for the wealthy. Eventually, the state’s Supreme Court ruled that schools were unconstitutionally underfunded and lawmakers reversed most of the tax cuts. Instead of learning from Kanas, Republicans in Congress seem doomed to repeat its mistakes—on a national level. We will all be those Kansas children.

MS: Do you expect the Senate’s tax plan to mirror what’s in the House plan? What might be any differences?

AC: There are many similarities between the Senate and House plan—both are terrible bills that give corporations a big tax cut, cut tax rates for the wealthiest people, and cost trillions of dollars. And while there are some differences between the bills—the Senate bill does not eliminate the medical expenses deduction or the student loan interest deduction, for example—nothing is off the table. The House and Senate would have to pass the same version of a tax bill before it could be signed into law, so – if it gets past the Senate – they would have to negotiate the differences between their bills. We have to operate knowing that nothing is safe in that process.

MS: Is there anything else you’d like to add?

AC: We have the power to stop this bill. Lawmakers answer to us, not the other way around. We are their bosses and we have to tell them what we want. And we don’t want this bill.

We have to flood the phone lines, show up at their offices, and make ourselves heard. We’ve got just a few days until the Senate votes on the bill, so let’s make those phones ring off the hook. Call your Senator at (888) 516-5820. When you get through, tell them you want your Senator to oppose the tax bill, and thank them. That’s it. You’ve done your patriotic duty. Now, repeat for your other Senator.