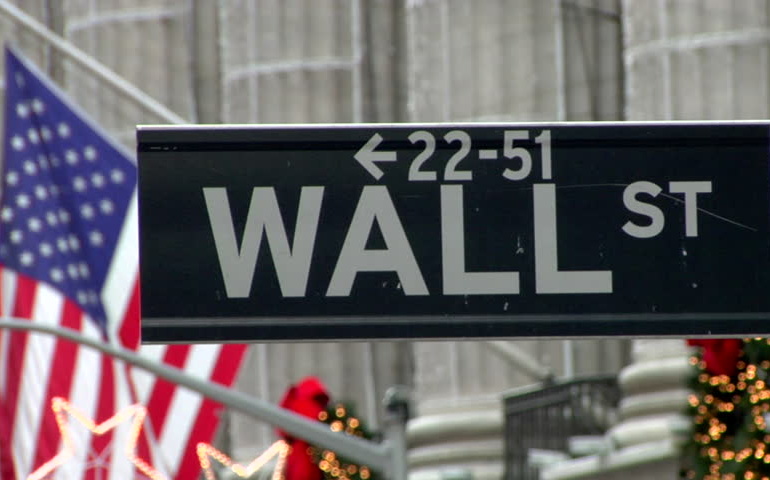 Donald Trump is the best thing to happen to Wall Street in twenty years. …This is because since the moment he took the oath of office, no one has so much as uttered a word about Wall Street. And much like Tyler Durden in Fight Club, Wall Street LOVES when no one is talking about it. (Also much like Tyler Durden Wall Street has an army of automatons wreaking mayhem throughout the land while those tasked with policing them are either incompetent, bought off, or both.)

As long as Donald Trump is caressing the White House with the care and loving kindness of a bull in a china shop being chased by a farmer trying to collect its testicles - As long as that’s going on, WallStreet can continue the breathtaking and unfettered pillaging of our country without the slightest bit of oversight. In fact, just this past week the Dow Jones hit 22,000 for the first time ever. And Trump has put Goldman Sachs in charge of the economy, just as President Obama did. [Insert your own fox/ hen house joke here, but I warn you, we’ve heard them all.]

Many people have their complaints about Occupy - It didn’t have a clear goal, it was populated by rich white kids, it smelled... less than savory. None of those complaints adhered to even a lax definition of “true,” but the truth doesn’t matter when America believes something deep down in its gut where John Cena lives. Say what you will about Occupy, but you can’t deny that while it was going on, the nation’s attention was on Wall Street.

During the 2011/ 2012 Occupy movement, for the first time in years the entire country took a critical eye to the institution that was running our economy (by “running” I mean “dry humping”). The nation FINALLY cared that this institution was steadily extracting all of the wealth and resources and giving it (in an unmarked bag) to a tiny percentage of men and women (mainly men) who smelled impeccable. Even those citizens who were wrongly disgusted by Occupy still felt that Wall Street was exploiting the American people at a jaw-dropping pace. And they got angry. The country got angry. FINALLY - at long last - everyone got ANGRY.

This is when the mainstream media did what they do best - they acted as the white blood cells attacking the infection in the system. (And I’m sure I’m not the first to use that analogy.) In this case the “infection” was activists calling attention to the full-blast destructive tendencies of unfettered capitalism. The media piled on the protesters as if those activists were the ones sucking every last penny out of the American people. This, along with a healthy dose of militarized police and FBI infiltration, is how Occupy ended up maligned and imprisoned. The white blood cells then moved on to step three of Operation Protect Wall Street (step one is ignore the protests, step two is attack the protesters). Step three is the same as step one - “ignore," which is akin to silencing. We saw these identical steps with Standing Rock. Most protest movements don’t get past step one; the mainstream media ignores them to see if they’ll simply go away, and it usually works. In fact until social media came along, it almost always worked. But now the internet has allowed for an alternate path to public awareness (and an alternate path to AMAZING photos of cats partaking in a variety of very un-catlike tasks). And this is why crushing net neutrality is something the FCC and Wall Street are drooling over. ...But I digress.

Right now the amounts of money being thrown around on Wall Street are bigger than they’ve ever been. There’s a massive auto loan bubble, and student loan bubble, and various other bubbles, and they’re all itching, aching, juking, and jiving to burst into a thousand pieces that will result in a lot of people going broke and McDonald’s McRib suddenly looking like a delicacy. The five richest men in the world have the same amount of wealth as the bottom half of the world - 3.67 BILLION people, and in the U.S. 99% of the wealth created since the “recovery” from the 2008 collapse has gone to the top 1%. The people that work on Wall Street - at the hedge funds and the big banks - do nothing but push around ones and zeros (and lowly interns). Yet they make more in a day than most people make in a year - and some people make in a lifetime.

This ravenous extraction of the wealth and resources of America only got worse under Obama and is only getting worse than the previous worse under Trump. For some ODD reason the Goldman Sachs officials that Obama/Trump put in charge of our economy never seem to want to regulate the big banks. …Yet the mainstream media isn’t talking about any of this because it’s not a silly tweet by Donald Trump. They also aren’t covering it because a) they serve massive telecoms that love WallStreet’s criminal schemes, b) it doesn’t fit into the “Democrats good/ GOP bad” (or vice versa) paradigm that every story must wear like an ill-fitting gown, and c) it also doesn’t fit into the “RUSSIA DID IT!” paradigm that every story must wear overtop its ill-fitting gown.

The dutiful white blood cells know that putting on these gowns will distract us all from the continued pillaging by the ultra wealthy. And those white blood cells may not like mixed metaphors as much as I do (I like them a lot), but they love anything that allows their corporate owners to go about business as usual. Not all who work at the mainstream media are villainous or even morally vacant, but those who aren’t are useful idiots greasing the gears of a neo-liberal/ neo-con extraction of the world.

Now, if you’re a good citizen, after finishing this column you should forget about the numbers you read within it, you should ignore the endless exploitation it reminded you about, and you should move past the thoughts of impending devastation that inevitably follow such exponential wealth redistribution and gut wrenching inequality. Instead you should find a Trump tweet (preferably something about a celebrity bleeding), and you should get furious about it. Then spend your day stewing over that and only that. Tomorrow find a new tweet: rinse and repeat. …Wall Street thanks you.

Lee Camp is the host and head writer of the comedy news show “Redacted Tonight” that airs every Friday on RT America and at YouTube.com/RedactedTonight. He’s a former political comedy writer for the Onion and the Huffington Post, and he's toured the world performing stand-up comedy. He's also @LeeCamp on Twitter.